Somewhat more complex than nanotubes and nanowires are nanoscale ion channels that are assembled into membranes.

Somewhat more complex than nanotubes and nanowires are nanoscale ion channels that are assembled into membranes. These channels are designed so that they can be controlled to permit the movement of ions under only certain conditions. The ion flow generates an electrical current that is detected, amplified, and displayed by appropriate electronic apparatus. 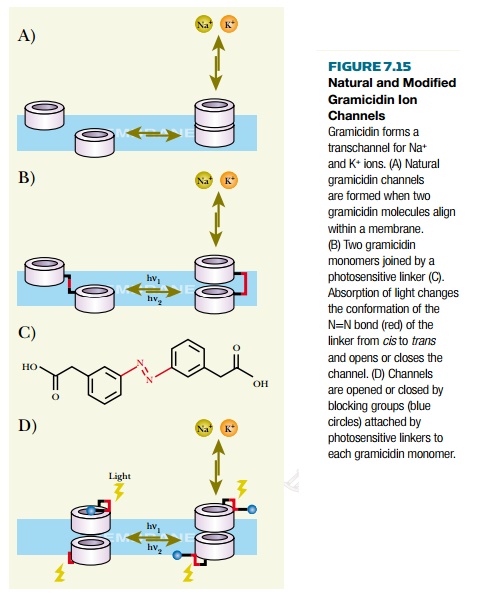 At present, such ion channels are being developed using modified biological components. The ion channel itself can be made using the peptide antibiotic gramicidin A (made by the bacterium Bacillus  brevis ). This transports monovalent cations, especially protons and sodium ions. Natural gramicidin spans half of a standard biological membrane. A short-lived channel is formed when two gramicidin molecules line up, as shown in Fig. 7.15 . Permanent channels may be made by covalently linking two gramicidin molecules together. Up to  ions/second flow through a single gramicidin channel. This gives a picoampere current that is easily measured. An alternative is to monitor a change in the pH due to movement of H+  ions. This may be done by using an optical sensor and a fluorescent pH indicator.

The channels are made responsive by attaching an appropriate ligand molecule to the front end of the gramicidin, so that it projects outward from the membrane surface. This ligand is chosen to bind the target molecule and may be an antigen or other small molecule that is recognized by an antibody or protein receptor. It is also possible to attach a single-stranded segment of DNA that will recognize and bind the complementary sequence. Thus biosensors may be designed to respond to the presence of a variety of biological molecules.

The membrane itself may be a lipid bilayer made using natural membrane lipids. Typical phospholipids span half a membrane (i.e., one monolayer), and the two monolayers can therefore slide relative to one another. The membrane may be stabilized by including lipids that span the whole membrane. These may be found naturally in certain archaebacteria or they may be synthesized artificially. Lipid bilayers are relatively fragile and in practice must be assembled on some solid support. Building a long-lasting and stable membrane structure has so far proven difficult, and practical ion channel sensors are still under development.