Recently, science has advanced into the area of nanotechnology. As the name indicates, the impetus has come from pursuing practical applications, especially in the fields of electronics and materials science, rather than a quest for theoretical knowledge.

In 1959, Richard Feynman was the first scientist to suggest that devices and materials could someday be fabricated to atomic specifications: “The principles of physics, as far as I can see, do not speak against the possibility of maneuvering things atom by atom.”

Molecular biology originated largely from the study of microorganisms. One micrometer is one millionth of a meter, and cells of Escherichia coli, the geneticist’s favorite bacterium, are roughly 1 micrometer (= “micron”) in length. A nanometer is one thousandth of a micrometer = 10−9 meters (Fig. 7.1). The terms micro- and nano- are both from Greek.

Mikros means “small.” More imaginative is nanos, a little old man or dwarf. Pico- comes from Spanish where it means a small quantity, or beak (from Latin beccus, “beak,” ultimately of Celtic origin). Prefixes for even smaller quantities are shown in Table 7.1. As far as length is concerned, these are applicable only to subatomic dimensions. Nevertheless, when dealing with masses and volumes on the nanoscale we may find femtograms and zeptoliters. 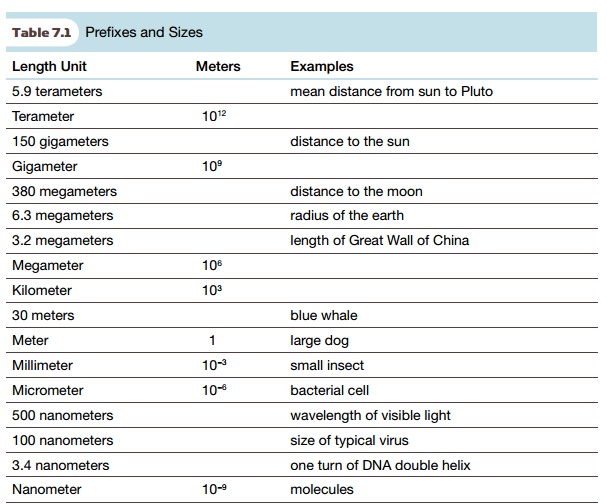 Recently, science has advanced into the area of nanotechnology. As the name indicates, the impetus has come from pursuing practical applications, especially in the fields of electronics and materials science, rather than a quest for theoretical knowledge. Nanotechnology involves the individual manipulation of single molecules or even atoms. Building components atom-by-atom or molecule-by-molecule in order to create materials with novel or vastly improved properties was perhaps the original goal of nanotechnologists. However, the field has expanded in a rather ill-defined way and tends to include any structures so tiny that their study or manipulation was impossible or impractical until recently. At the nanoscale, quantum effects emerge and materials often behave strangely, compared to their bulk properties.

The internal components of biological cells are on the same scale as those studied by  nanotechnology. As a consequence, nanotechnologists have looked to cell biology for useful structures, processes, and information. Cellular organelles such as ribosomes may be regarded as programmable “nanomachines” or “nano-assemblers.” Thus nanotechnology is spilling over into molecular biology. Much of “nanobiotechnology” is in fact molecular biology viewed from the perspective of materials science and described in novel terminology.

All chemical reactions operate at a molecular level. What distinguishes true nanotechnology is that single molecules or nanostructures are assembled following specific instructions.

A ribosome does not merely polymerize amino acids into a chain. It takes specified amino acids, one at a time, according to information provided, and links them in a specific order. Thus the critical properties of a nanoassembler include the ability not only to assemble structures at the molecular level but to do so in a specific and controlled manner.

The main practical objectives of nanobiotechnology are using biological components to achieve nanoscale tasks. Some of these tasks are nonbiological and have applications in such areas as electronics and computing, whereas others are applicable to biology or medicine. The purpose of this chapter is to show, by selected examples, how biological approaches can contribute to nanoscience.