Allosteric proteins change shape in response to the binding of signal molecules (allosteric effectors) at a specific site.

Allosteric proteins change shape in response to the binding of signal molecules (allosteric effectors) at a specific site. The essence of allosteric control is that the shape change is transmitted through the protein and affects the conformation of distant regions of the protein. In allosteric enzymes, binding of an allosteric effector at a distant site alters the conformation of the active site and may change its affinity for the substrate. In this way, some enzymes are switched on and off in response to signal molecules. For example, phosphofructokinase is switched on by the buildup of AMP, which signals that energy is in short supply. The response increases flow into the glycolytic pathway. Similarly, many DNA binding proteins, such as repressors and activators, also change shape on binding small signal molecules.

It is possible to change the shape of a protein artificially by mechanical force. This has been demonstrated by attaching a single-stranded 60-base segment of DNA between the two poles of a protein. Attaching the DNA requires chemical “handles.” These are engineered into the target protein by replacing amino acids at appropriate positions with cysteine. The reactive SH group is then used to chemically attach the DNA. 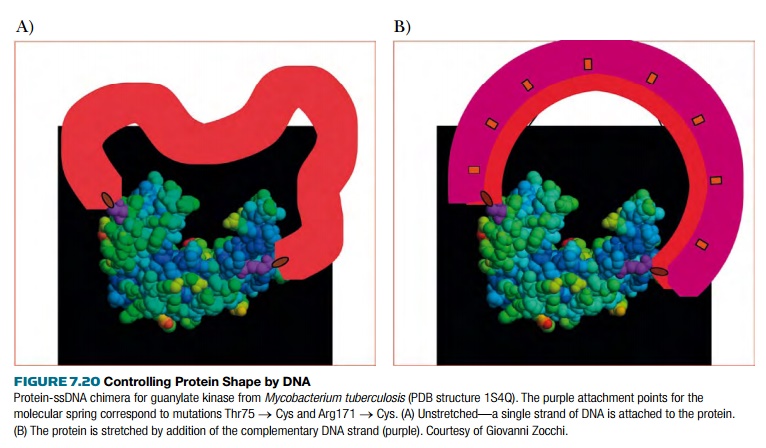 Double-helical DNA is much more rigid than ssDNA. Consequently, the addition of the complementary strand generates tension as it binds and creates a double helix. This approach has so far been demonstrated in the laboratory of Giovanni Zocchi at UCLA with maltose binding protein and an enzyme, guanylate kinase. When maltose binding protein is stretched, its binding site for maltose opens wider than optimum and the affinity for the sugar decreases. For guanylate kinase (Fig. 7.20), applying tension decreases enzyme activity by lowering affinity for substrate binding. In this case releasing the tension by adding DNase  to digest the DNA switches the enzyme on again.

Potential applications are a long way in the future. However, it is possible to imagine biosensors that detect DNA sequences based on this mechanism. In addition, it might be possible to externally control enzymes or other proteins by adding appropriate ssDNA (or, of course, RNA).