Home | | The Diversity of Fishes: Biology Evolution and Ecology | Scale morphology in taxonomy and life history - Integumentary skeleton of Fishes
Posted On :  06.08.2017 11:06 pm 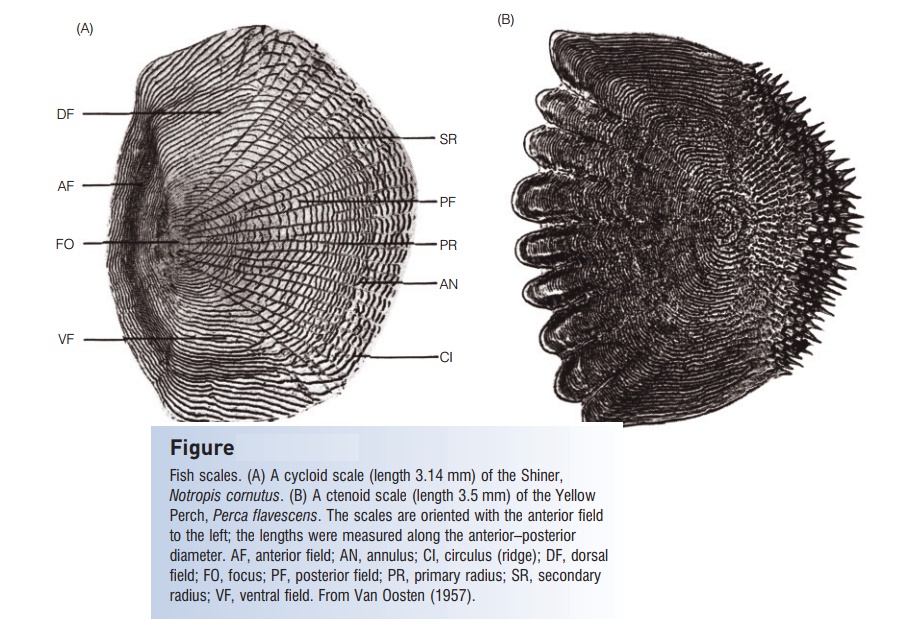 For studying taxonomy and life history, various parts of the scale are distinguished. Cycloid and ctenoid scales can bedivided into four fields .

For studying taxonomy and life history, various parts of the scale are distinguished. Cycloid and ctenoid scales can bedivided into four fields (Fig. 3.18): anterior (which is frequently embedded under the preceding scale), posterior, dorsal, and ventral. The focus is the area where scale growth begins. The position and shape of the focus may vary, being oval, circular, rectangular, or triangular. Radially arranged straight lines called radii may extend across any of the fields. A primary radius extends from the focus to the margin of the scale. A secondary radius does not extend all the way out to the margin of the scale. Radii may be present in different fields: only anterior, as in pickerels (Esox); only posterior, as in shiners (Notropis); anterior and posterior, as in suckers (Catostomidae); or even in all four fields, asin barbs (Barbus). Ctenii may occur in a single marginal rowor in two or more rows located on the posterior field.

Circuli are growth rings around the scale. Life history studies, particularly those dealing with age and growth, utilize such growth rings. This is especially useful in temperate waters where pronounced retardation of growth of body and scales occurs in fall and winter, causing thespacing between the circuli to decrease and thus leaving a band on the scales called an annulus. However, interpreting such marks as annuli requires caution because any retardation in growth may leave a mark. The stress of spawning, movement from fresh to salt water, parasitism, injury, pollution, and sharp and prolonged change in temperature may all leave marks on the scales similar to annuli. Scales grow in a direct relationship with body growth, making it possible to measure the distance between annuli and back calculate the age at different body sizes. Other hard structures also show growth changes  and can be used for aging, such as fin spines, otoliths, and various bones such as opercles and vertebrae(DeVries & Frie 1996).

Scale morphology can also be useful in identification of fragments such as scales found in archeological kitchen middens or in stomach contents. An example of the latter is Lagler’s (1947) key to the scales of Great Lakes families. Scale morphology is also useful in  classification, as shown by McCully’s (1962) study of serranid fishes, Hughes’s(1981) paper on flatheads, Johnson’s (1984) review of percoids, Coburn and Gaglione’s (1992) study of percids, and Roberts’ (1993) analysis of spined scales in the Teleostei. 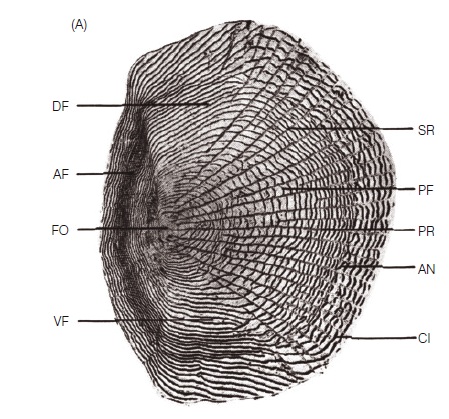 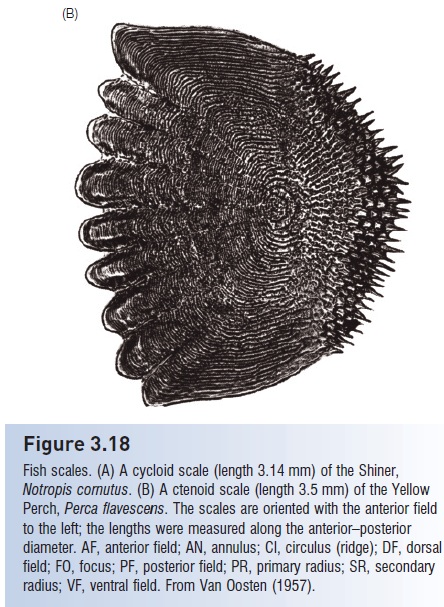