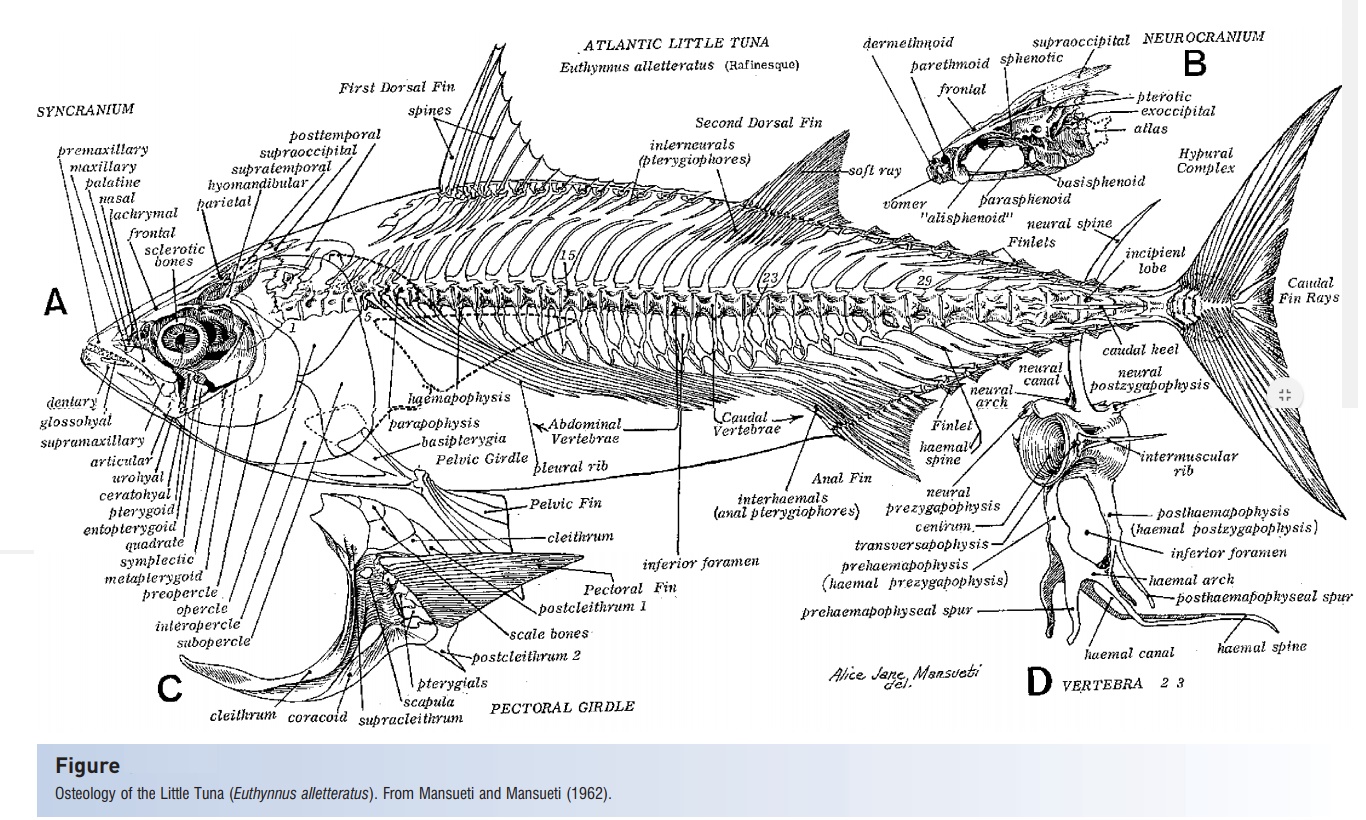 The osteology (study of bones) of fishes is more com plicatedthan in other vertebrates because fish skeletons are madeup of many more bones.

The osteology (study of bones) of fishes is more com plicate than in other vertebrates because fish skeletons are made  up of many more bones. For example, humans (sarcopterygian) have 28 skull bones, a primitive reptile (sarcopterygian) has 72, and a fossil chondrostean (actinopterygian) fish more than 150 skull bones (Harder 1975). The general evolutionary trend from primitive actinopterygians to moreadvanced teleost’s and from aquatic sarcopterygians totetrapods has been toward fusion and reduction in numberof bony elements (, Trends during teleosteanphylogeny).

Why do we need to know about the osteology of fishes?First of all, we cannot really understand such processes as feeding, respiration, and swimming without knowing which jaw bones, branchial bones, and fin supports are involved.Knowledge of the skeleton is necessary to understand the relationships of fishes and much of classification is based on osteology. Identification of bones is also important in paleontology, in identifying food of predatory fishes, and in zoo archeology for learning about human food habitsfrom kitchen midden material.

If learning about fish bones is important, how does onego about studying them? Large fishes can be fleshed out andthen either cleaned by repeated dipping in hot water or by putting the fleshed out skeleton in a colony of dermestid beetles that eat the flesh and leave the bones (Rojo 1991). Bemis et al. (2004) have recently described a method that requires fairly complete dissection of the specimen andalcohol dehydration to dry it out. Study of the osteology of small fishes and juveniles of large species was difficultuntil the development of techniques of clearing and staining.This technique, using the enzyme trypsin, makes the flesh transparent. Then the bones are stained with alizarin red S and the cartilages with Alcian blue (Potthoff 1984; Taylor& van Dyke 1985).

The skull, or cranium (Fig. 3.2), is the part of the axial endoskeleton that encloses and protects the brain and mostof the sense organs. It is a complex structure derived fromseveral sources. Homologies of some fish skull bones arestill debated (e.g., the origin and composition of the vomer in the roof of the mouth). The skull has two major components: the neurocranium and the branchiocranium. Theneurocranium is composed of the chondrocranium and the dermatocranium. 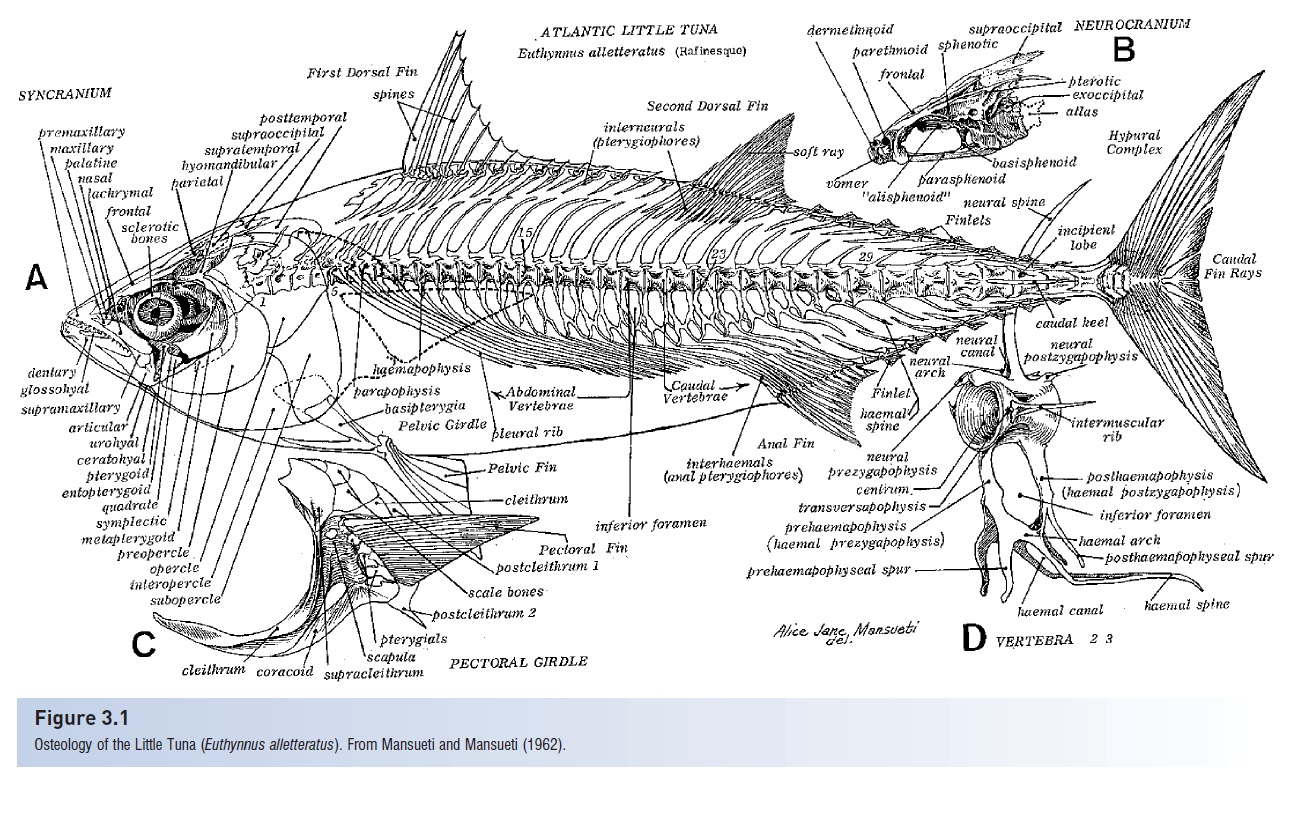 Lateral view of the skull of the Dogtooth Tuna (Gymnosarda 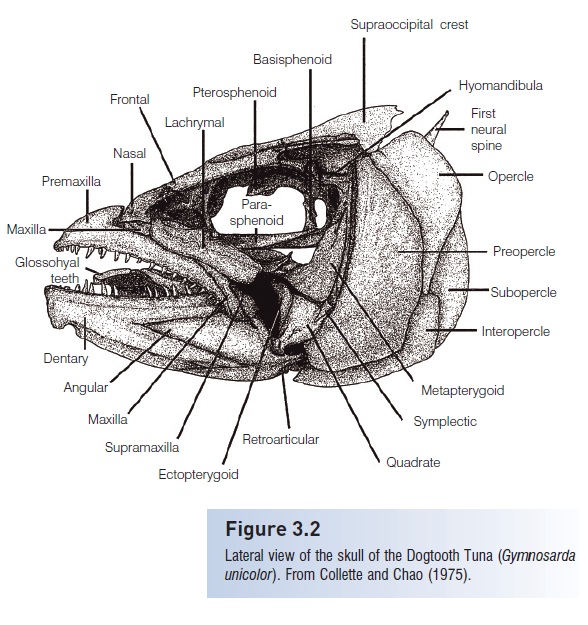 The chondrocranium derives from the embryonic cartilaginous brain case. Its bones ossify (harden) during ontogeny as cartilage is replaced by bone. Cartilage replacement(or endochondral) bones and dermal bones have similar histological structure but differ in that cartilage bones are performed in cartilage before they ossify. Some bones, however, are of complex origin coming from bothsources. The dermatocranium consists of dermal bones. Itis believed that the bones of the dermatocranium evolved from scales that became attached to the chondrocranium.

The branchiocranium, or visceral cranium, consists of a series of endoskeletal arches that formed as gill arch supports.The branchiocranium is also known as the splanchnocraniumbecause it is derived from splanchnic mesoderm.The circumorbital, opercular, and branchiostegal bones overlie the branchiocranium, which abuts the neurocraniumand pectoral girdle.