The branchiocranium is divisible into five parts: the mandibular,palatine, hyoid, opercular, and branchial.

The branchiocranium is divisible into five parts: the mandibular, palatine, hyoid, opercular, and branchial.

The mandibular arch forms the upper jaw and is known asthe palatoquadrate cartilage in Chondrichthyes. It is composed entirely of dermal bones in bony fishes. The mandibular arch may have three sets of bones. The dentigerous(tooth-bearing) premaxillae are the anterior mostelements. Themaxillae are dentigerous in some soft-rayed fishes, but the maxilla is excluded from the gape in more advanced spiny-rayed fishes. The third bone that may be present ishe supramaxilla. It is a small bone on the posterodorsalmargin of the maxilla. Some teleost’s, like the herringlikefishes (Clupeoidei), have multiple supramaxillae.

The lower jaw consists of Meckel’s cartilage in Chondrichthyes. In bony fishes, the dermal, dentigerous dentary bone (Fig. 3.8) covers Meckel’s cartilage, which is reducedto a thin rod extending posteriorly along the inner face of the dentary to the angular. A dorsoposterior ossification of Meckel’s cartilage forms an articular. Theangular (sometimes called articular) is a large, posterior dermal bone thatfits into the V of the dentary. A ventroposterior dermal ossification forms the retro articular(sometimes called angular), a small bone attached to the posteroventral cornerof the angular. In most teleost’s the angular fuses with oneor both articulars. Two additional ossifications associated with Meckel’s cartilage are usually also present, a smallnublike sesamoid ossification (the coronomeckelian) and amentomeckelian at the distal tip which becomes incorporated (often early in ontogeny) with the dentary. The lowerjaw forms a single functional unit in most bony fishes, butin the Kissing Gourami (Helostoma temmincki), African characins of the genus Distochodus, and some parrotfishes of the genus Scarus there is a mobile joint between thedentary and the angular (Liem 1967; Vari 1979; Bellwood1994).

The oral jaws and many pharyngeal bones may bear teeth.Many different terms have been applied to the differentsizes and shape of teeth.Although the different kinds form a continuum, they canbe divided into several types:

4 Cardiform: fine, pointed teeth arranged as in a woolcard; for example, the pharyngeal teeth in pickerels (Esox).

6 Teeth fused into beaks for scraping algae off corals, as in parrotfishes (Scaridae) and Pacificknife jaws(Oplegnathidae), or for biting crustaceans or echinoderms, as in blowfishes (Tetraodontiformes).

7 Flattened triangular cutting teeth, as in sharks and piranhas. Sharp, cutting teeth are uncommon in bonyfishes with the exception of some characins (Characoidei) such asMyleus that feed on plants andSerrasalmus, a genus of the infamous carnivorous piranhas.

The palatine arch consists of four pairs of bones in the roofof the mouth (see Fig. 3.8). The palatines are cartilage bones that are frequently dentigerous. They have been called “plowshare” bones because of their characteristic shape. The dermal ectopterygoids are narrow bones, sometimesT-shaped, sometimes dentigerous. The dermal entopterygoids (or mesopterygoids) are thin bones thatroof the mouth. The metapterygoids are cartilage bones, quadrangular-shaped and articulating with the quadrate and hyomandibula.

Lateral bones of face and lower jaw suspension of a generalized characin (Brycon meeki). From Weitzman (1962). 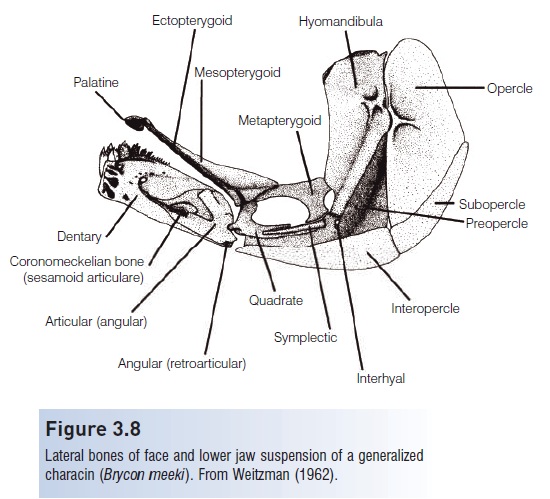 The hyoid complex is a series of five pairs of bones (Fig.3.10) that lie medial to the lower jaw and opercular bonesand lateral to the branchiostegal rays that attach to them.The anterior most bones are the dorsal and ventral hypohyals (or basihyals). They are followed by the anterior ceratohyal, a long flat bone that interdigitates with the posteriorceratohyal posteriorly and to which some of the branchiostegalrays attach. The posterior ceratohyal (or epihyal) isa triangular bone to which some of the branchiostegal rays attach. The interhyal is a small, rod-shaped bone that attaches the hyoid complex to the suspensorium. The glossohyalis an unpaired flattened bone that lies over the anterior basibranchial and supports the tongue.

The dermal bones of the hyoid arch are the branchiostegalrays, elongate, flattened, rib like structures (Fig. 3.10) that attach to the ceratohyal and epihyal. They are important in respiration, particularly in bottom-dwelling species. Their number and arrangement are useful in tracing phylogenies (see McAllister 1968). The medianurohyal is a flattened, elongate, unpaired bone that lies inside the rami (branches) of the lower jaw. The urohyal is an ossification of a median tendon in the sternohyoideus muscle, and is a sesamoid ossification (not a dermal bone) and synapomorphyof teleosts.

Major types of jaw suspension in fishes. From Walker and Liem (1994). 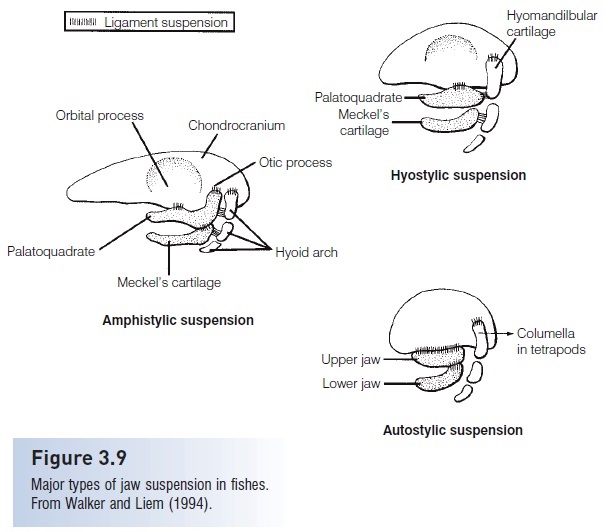 The opercular apparatus consists of four pairs of wide, flat dermal bones that form the gill covers, protect the underlying gill arches, and are involved in respiration and feeding. The opercle is usually more or less rectangular and is usually the largest and heaviest of the opercular bones (see Figs 3.2, 3.8). It has an anterior articulation facet connecting

with the hyomandibula. The subopercle is theinnermost and most posterior element. The preopercle is the anterior most elements. It overlies parts of the otherthree opercular bones. The interopercle is the most ventral bone.

Left hyoid complex in lateral view of a Spanish mackerel(Scomberomorus commerson). From Collete and Russo (1985b). 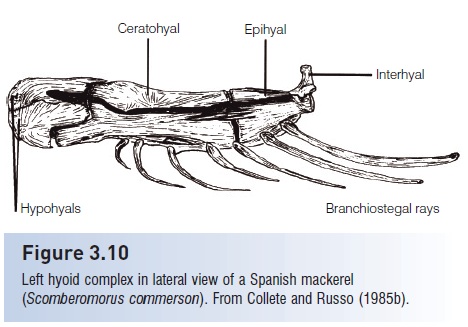 The fourth ceratobranchial is more irregular than the first three. The fifth is usually expanded, bears a tooth plate, and is sometimes called the lower pharyngeal bone. Four pairs of epibranchials attach basally to theceratobranchials. They vary from being long and slender(like a shortceratobranchial) to short and stubby. Fourpairs of pharyngobranchials attach to the epibranchials.The first is suspensory and attaches to the braincase. Theother three may have dermal tooth patches attached tothem and are then termed upper pharyngeal bones. For a detailed account of the gill arches and their use in tracingfish phylogeny, see Nelson (1969).

For a general reference to the osteology of the skull ofmany species, consult Gregory (1933); for a more completetreatment of ostariophysan fishes, Harrington (1955) and Weitzman (1962) are excellent sources. A complete review of the brain case of actinopterygian fishes and their fossil ancestors, pholidophorids and leptolepids, was presentedby Patterson (1975).

Branchial arch of a Spanish mackerel (Scomberomorussemifasciatus). Dorsal view of the gill arches with the dorsal region folded back to show their ventral aspect. The epidermis is removedfrom the right-hand side to reveal the underlying bones. FromCollete and Russo (1985b). 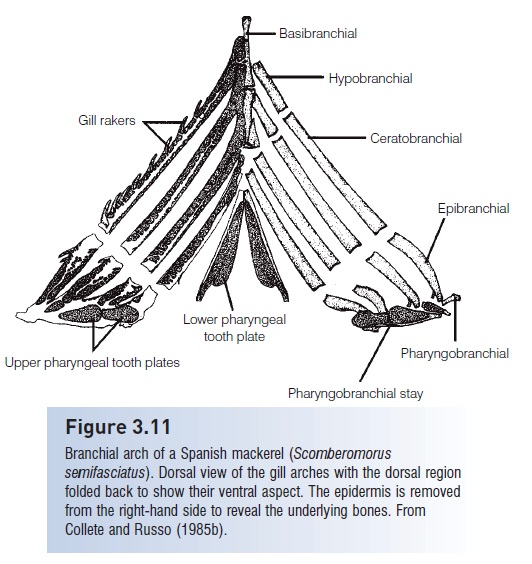