Pectoral and pelvic girdles are primitively absent in thehagfishes and lampreys.

Pectoral and pelvic girdles are primitively absent in the hag fishes and lampreys. Sharks have a coracoscapular cartilage that hangs more or less freely inside the body wall and has no attachment to the vertebral column. In rays, the pectoral girdle is attached to the fused anterior section of the vertebral column (synarchial condition) and also, byway of the propterygium of the pectoral girdle and antorbital cartilage, to the nasal capsules of the skull.

Unlike the condition in tetrapod’s, the pectoral girdle in bony fishes usually has no attachment to the vertebral column and instead attaches to the back of the skull via the posttemporal bone. Rather than dividing bones into cartilage and dermal, as done for the skull, it seems more practical to present the bones in sequence from the skull to the girdle bones themselves.

Three dermal bones are involved in the suspension of the pectoral girdle from the skull. The post temporal usually has two anterior projections that attach to the epioccipitaland intercalar bones on the back of the skull. The extrascapular (or supratemporal) is a thin tubular bone, sometimes two bones, that carry part of the lateral line canal onto the body. They usually lie right under the skin dorsal to the post temporal (Fig. 3.16). The supracleithrum is a heavy bone that lies between the post temporal and the pectoral girdle. 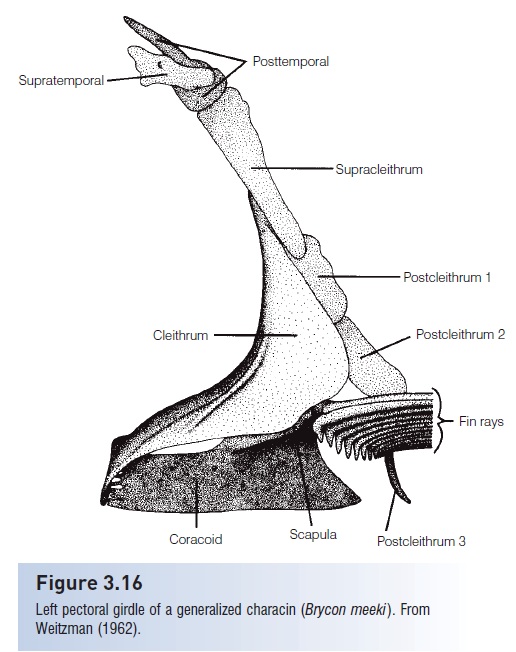 The pectoral girdle is composed of two cartilage and onedermal bone in acanthopterygians. The dermal cleithrum is the largest, dorsal most, and anterior most element of thepectoral girdle. The scapula is a small bone, usually with around scapular foramen, lying between the cleithrum and the radials. The coracoid is a long, thin bone that makes up the posterior part of the pectoral girdle and may supportsome of the pectoral fin radials. An additional element is found between the coracoid and cleithrum in many softrayedteleost`s, the mesocoracoid. This bone is lost inspiny-rayed fishes as the pectoral fin moves up and assumesa vertical instead of oblique position.

The actionistsplus tiny distal radials are hourglass shaped cartilage bones that connect to the pectoral fin rays.There are typically four in teleost`s, attached to the coracoid and scapula.

The pelvic girdle, like the pectoral girdle, is usually not attached to the vertebral column in fishes as it is in tetrapod’s. In sharks, the pelvic girdle consists of theischiopubiccartilages that float freely in the muscles of the posterior region of the body. In primitive bony fishes, there are paired pelvic bones, basipterygia, and radials to which the pelvic fin rays attach. In advanced bony fishes, both the pelvic bone itself and the radials are lost or fused so that the fin rays attach directly to the single remaining element, the basipterygium.

Pelvic fin rays are frequently lost, and in some cases, suchas eels (Anguilliformes), the neotenic South American needlefish Belonion apodion, and puffers, the pelvic girdle has also been lost.

The median or unpaired fins consist of the dorsal, anal, and adipose fins along the dorsal and ventral profiles of the fish.In jawless fishes, cartilaginous rods support the median fins.In Chondrichthyes, the median fins are supported byceratotrichia,horny fin rays composed of elastin and supportedby dermal cells. Below the ceratotrichia are three layers of radials – rodlike cartilages that support the fin rays and extend inward toward the vertebral column. If a spine ispresent at the anterior end of a median fin in a chondrichthyansuch as the Spiny Dogfish (Squalus acanthias), it isnot a true spine such as is found in spiny-rayed fishes (Acanthopterygii)but is rather a fusion of radials.

Primitive soft-rayed teleost`s have a single dorsal fin that is composed entirely of soft rays. Advanced teleost`s usually have two dorsal fins, with the anterior one (first dorsal fin)composed of spines and the posterior one (second dorsalfin) composed largely of soft rays, although there may beone spine at the anterior margin of the fin. Some soft-rayed fishes such as the Carp, the Goldfish, and catfishes may havea single spine at the anterior end of the dorsal fin, but this is a bundle of fused rays, not a true spine.

Some fast-swimming fishes such as the mackerels and tunas may have a series of dorsal finlets, small fins with onesoft ray each, following the second dorsal fin.

Several groups of soft-rayed fishes have an additional fin posterior to the dorsal fin, the adipose fin, which varies greatly in size among different fishes. “Adipose” is a poor term for this fin because it is rarely fatty. The adipose fin usually lacks lepidotrichia and is supported only by ceratotrichia, although some catfishes have secondarily developed spine, composed of fused rays, at its anterior margin.The function or functions of adipose fins remain something of a mystery, but their presence is useful in identifyin members of five groups that usually have them: characins(Characiforms), catfishes (Siluriformes), trout’s and salmons(Salmoniformes), lantern fishes and relatives (Myctophiformes),and trout-perches (Percopsidae).

The original function of the dorsal fin was as a stabilizer during swimming, but it has been modified in manydifferent ways. It has been reduced or lost in rays (Batoidei)and South American knifefishes (Gymnotiformes). Thedorsal and anal fins become confluent, joined with thecaudal fin, around the posterior part of the body in many eels(Anguilliformes). The individual spines in the firstdorsal fin have become shortened in fishes such as theBluefish (Pomatomus saltatrix) and the Cobia (Rachycentroncanadum). The first dorsal fin has been converted into a suction disk in the remoras (Echeneidae). The membranes between the spines have lost their attachment toeach other in the bichirs(Polypteridae) and sticklebacks(Gasterosteidae). Venom glands have become associatedwith dorsal fin spines, and other spines, in fishes such asthe stonefish (Synanceia), the weeverfishes (Trachinidae),and venomous toadfishes (Thalassophryninae). The spinydorsal fin has been converted into a locking mechanism inthe triggerfishes (Balistidae). It is depressible into a grooveduring fast swimming in the tunas (Scombridae). Perhapsthe most extreme modification of a dorsal fin is the conversion of the first dorsal spine into an ilicium, or fishingrod, with an esca, or bait, at its tip in the anglerfishes(Lophiiformes).