The notochord is primitively a supporting structure inchordates. It is a simple, longitudinal rod composed of agroup of cells that, when viewed in cross-section, appearto be arranged as concentric circles.

The notochord is primitively a supporting structure in chordates. It is a simple, longitudinal rod composed of a group of cells that, when viewed in cross-section,appear to be arranged as concentric circles. The most primitive chordate to possess a notochord is the “tadpole” larva of tunicates. The notochord provides support for an elongate body while swimming. Notochordal cells inside the notochord are few in number and contain large vacuoles. Turgorof the notochordal cells provides rigidity. The notochordis found during embryonic development in all chordates,but intervertebral disks are all that remain of the notochord in most adults. However, it is present in adult lancelets, Chondrichthyes, Dipnoi, sturgeons (Acipenseridae), paddlefishes (Polyodontidae), and coelacanths. A 1 m long sturgeon may have a notochord nearly as long and about 12 mm in diameter.

Vertebrae arise and form around the notochord where muscular myosepta intersect with dorsal, ventral, and horizontalsepta. Vertebrae form from cartilaginous blocks called arcualia. Typically, there is one vertebra per body segment, the monospondylous condition. The basidorsal,interdorsal, basiventral, and interventral arcualia all fusetogether to form a single vertebra. In the diplospondylous condition, the basidorsal fuses to the basiventral and the interdorsal fuses to the interventral, producing two vertebrae per body segment. Diplospondyly is present in the tail region of sharks and rays, in lungfishes, and in the caudal vertebrae of the Bowfin (Amia). Diplospondyly is thought to increase body flexibility.

Vertebrae are usually divided into precaudal (anterior vertebrae extending posteriorly to the end of the body cavity and bearing ribs) and caudal vertebrae (posterior vertebrae beginning with the first vertebra bearing an elongate haemal spine surrounding a closed haemal canal through which the caudal artery enters) (Fig. 3.12). 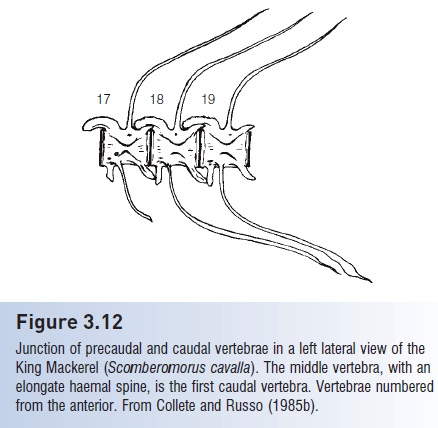 Junction of precaudal and caudal vertebrae in a left lateral view of theKing Mackerel (Scomberomorus cavalla). The middle vertebra, with an elongate haemal spine, is the first caudal vertebra. Vertebrae numbered from the anterior. From Collete and Russo (1985b).

Vertebrae may have various bony elements projecting from them. Dorsally, there is an elongate neural spine housing a neural arch through which the spinal cord passes(Fig. 3.13A). Ventrally, there may be parapophyses that extend ventrolaterally and to which the ribs usually attach.The main artery of the body, the dorsal aorta, passes ventral to the precaudal vertebrae and enters the closed haemalcanal (Fig. 3.13B) toward the end of the abdominal cavity,at which point it is referred to as the caudal artery. Otherprojections include neural prezygapophyses and postzygapophyseson the dorso lateral margins of the vertebrae andhaemal prezygapophyses andpostzygapophyses on theventrolateral margins (Fig. 3.13D). 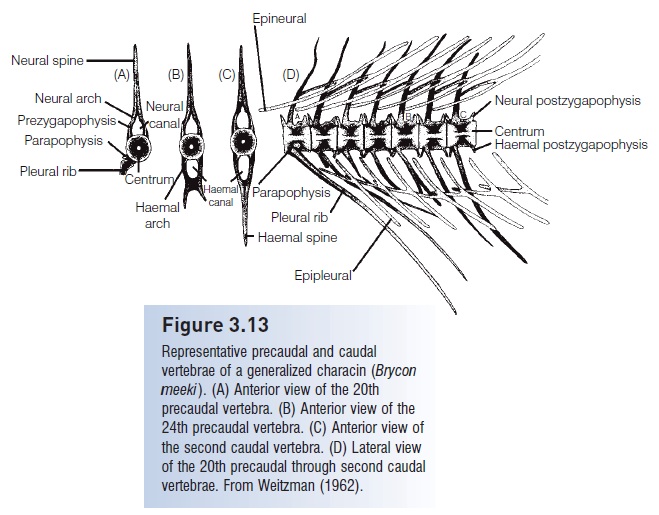 Pleural ribs form in the peritoneal membrane and attach to the vertebrae, usually from the third vertebra to the lastprecaudal vertebra. They are distinct fromintermuscular bonesand serve to protect the viscera. Terminology used for these bones, and for ribs, was confused until Pattersonand Johnson (1995) clarified the situation. Patterson and Johnson recognized three series of intermuscular bones:epineuria’s, epicentrals, and epipleurals. Primitively, ossifiedepineuria’smay be fused with the neural arches. Some are autogenous (unfused) and may develop an antero ventral branch as in characins (see Fig. 3.13D). Epineuria’susually start on the first vertebra (sometimes on the back of theskull; see Fig. 3.7) and continue along the vertebrae well posterior to the ribs. Epicentrals lie in the horizontal septum and are primitively ligamentous. Epipleurals start medially and move anteriorly and posteriorly. They lie belowthe horizontal septum and are posteroventrally directed.

The tail of a fish is a complex of vertebral centra, vertebral accessories, and fin rays that have been modified during evolution to propel the fish forward in a linear fashion. The functional morphology of the fish tail. The teleosteancaudal skeleton was largely neglected as a source of systematic characters until Monod (1968) surveyed the caudal skeleton of a broad range of teleost’s and established coherent and homogeneous terminology. Schultze andArratia (1989) further showed the value of the caudal skeleton inthe  classification of teleost`s. In primitive teleost’s, a number of hypurals (enlarged haemal spines) support most of the branched principal caudal fin rays that form the caudal fin (Fig. 3.14). Epurals (modified neural spines) andthe last haemal spine support the small spine likeprocurrent caudal fin rays. In many advanced teleost`s, the number ofhypurals has been reduced to five. In some groups, such asatherinomorphs, sticklebacks, sculpins, the Louvar, tunas and mackerels, and flatfishes, the posterior vertebrae havebeen shortened and some of the hypurals fuse to form ahypural plate. In scombrids, hypurals 3 and 4 are unitedinto the upper part of the plate and hypurals 1 and 2 intothe lower part (Fig. 3.15). 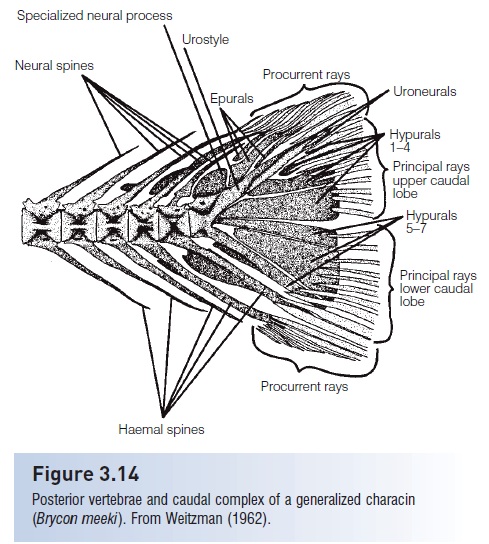 Posterior vertebrae and caudal complex of a generalized characin(Brycon meeki). From Weitzman (1962).

Caudal fins of fishes vary in both external shape and internal anatomy. The different types of caudal fins provideuseful information about modes of swimming as well as about phylogeny. There are three basic types of fish tails,with an additional three types recognized for special groups of fishes.

The protocercal tail is the primitive undifferentiated caudal fin that extends around the posterior end in adult lancelets, agnathans, and larvae of more advanced fishes.

In the heterocercal, or unequal-lobed, tail, the vertebral column extends out into the upper lobe of the tail. This type of tail is found in Chondrichthyes and primitive bony fishes such as sturgeons (Acipenseridae) and is still recognizable in gars (Lepisosteidae). Amia, the Bowfin, has what has been termed a hemi homocercal tail (Harder 1975), intermediate between heterocercal and homocercal, with external but not internal symmetry. 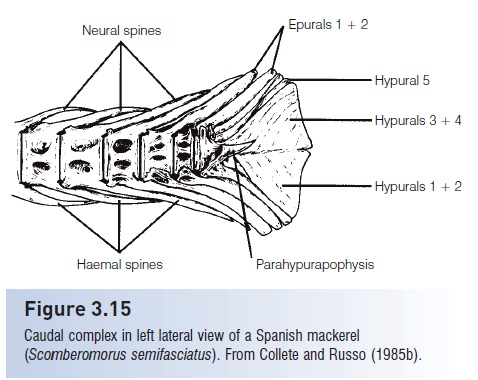 Caudal complex in left lateral view of a Spanish mackerel(Scomberomorus semifasciatus). From Collete and Russo (1985b).flattened plate to which the caudal fin rays attach in the cods (Gadidae).

Most advanced bony fishes have a homocercal, or equal lobed,tail (see Figs. 3.14, 3.15). In this type of tail, the caudal fin rays are arranged symmetrically and attach to a series of hypural bones posterior to the last vertebra thatsupports the caudal fin rays. These plates are ventral to the upward-directed urostyle, so this type of tail could be consideredto be an abbreviated heterocercal tail.

caudal around the posterior part of the fish, but this isconsidered to have been secondarily derived, not primitive.This type of tail is found convergently in lungfishes (Dipnoi),coelacanths, rattails (Macrouridae), and many eel-like fishes.