The chondrocranium of bony fishes is derived from cartilaginouscapsules that formed around the sense organs.

The chondrocranium of bony fishes is derived from cartilaginous capsules that formed around the sense organs. Toclarify spatial relationships among the large number ofbones in the skull, it helps to divide the skull into four regionsassociated with major centers of ossification. From anterior to posterior, these regions are the ethmoid,orbital, otic, and basicranial. For each region, the cartilage bones will be discussed first, followed by the dermal bones, which tend to roof over, and often fuse with the underlying cartilage bones. Consult Harder (1975, pl. 1A-C) for a threepart plate of overlays that greatly helps visualize how theteleost skull bones fit together.

The ethmoid region remains variably cartilaginous even in adults of most teleost’s (see Table 1.1) but there are alsodermal elements fused to some of these bones. Two main sets of cartilage bones form the ethmoid region. Paired lateral ethmoids (or parethmoids) form the posterolateral wall of the ethmoid region and the anterior wall of the orbit (Figs 3.3–3.5). The median chondral ethmoid (or supraethmoid) is the most anterodorsal skull bone. It often has a dermal element fused to it, in which case it is usuallytermed the me ethmoid. There are also two sets of dermal bones in this region. The median often dentigerous (tooth bearing) vomer, which may be absent in a few teleost’s, lies ventral to the me ethmoid, whereas the paired dermal nasals are lateral to the ethmoid region, associated with the olfactory nasal capsule. The vomer is usually considered, phylogenetically, to be compound (chondral median ventral ethmoid+dermal vomer).

Lateral view of the neurocranium of the Dogtooth Tuna (Gymnosarda unicolor). From Collete and Chao (1975). 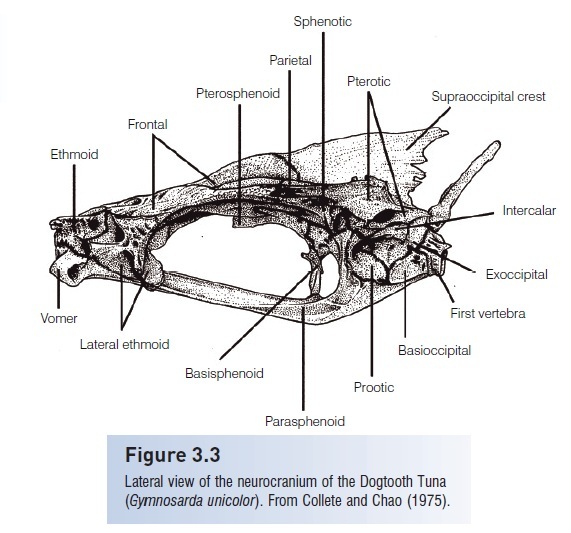 Dorsal view of the neurocranium of the Dogtooth Tuna (Gymnosarda unicolor). From Collete and Chao (1975). 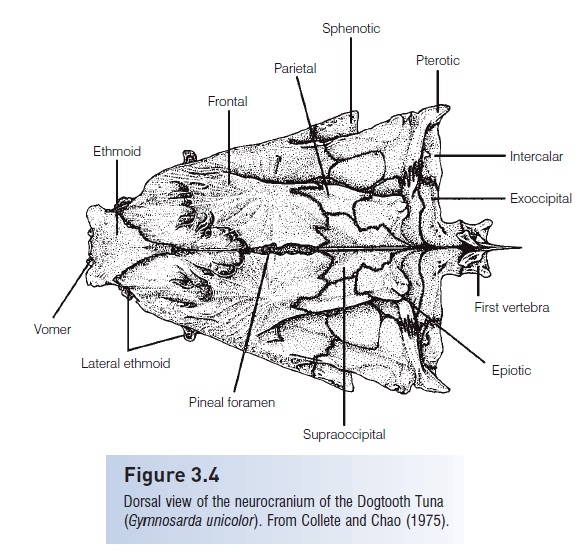 The region that surrounds the orbit is composed of three sets of cartilage bones and two sets of dermal bones.Cartilage bone components include pairedpterosphenoids(alisphenoids in earlier literature), which meet along the ventral median line of the skull. The median basisphenoidextends from the pterosphenoids down to the parasphenoidand may divide the orbit into left and right halves.Sclerotic cartilages or bones protect and support the eyeball itself. Two sets of dermal bones are the paired frontals, which cover most of the dorsal surface of the cranium, and the circumorbitals. The circumorbitals form a ring around the eye in primitive bony fishes. However, this ring iseduced to a chain of small infraorbital bones under and behind the eye in advanced bony fishes. Advanced teleost usually have infraorbital 1; thelachrymal, or preorbital;IO2, or jugal; IO3, or true suborbital, which may bear a suborbital shelf that supports the eye; and the dermosphenoticbones, or post orbitals, which bear the infraorbital or suborbital lateral line canal (Fig. 3.6). Many primitive teleost also have an ant orbital and a supraorbital.

Ventral view of the neurocranium of the Dogtooth Tuna (Gymnosarda unicolor). From Collete and Chao (1975). 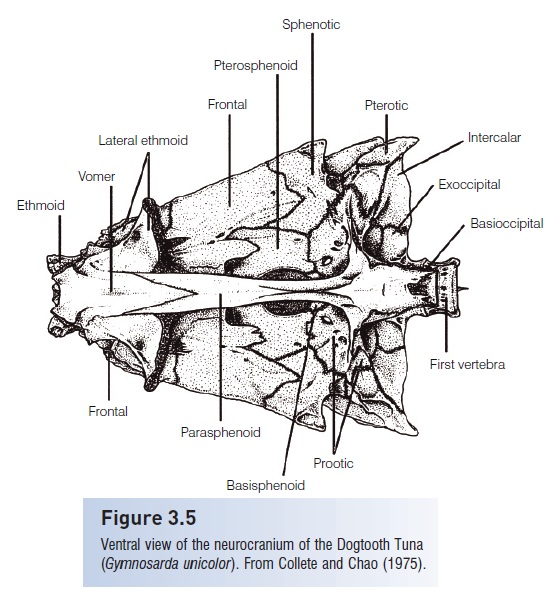 Left infraorbital bones in lateral view of the Spanish Mackerel (Scomberomorus maculatus). From Collete and Russo (1985b). 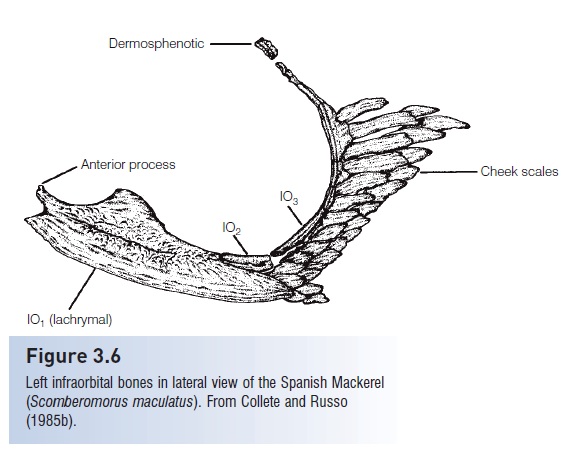 Five cartilage bones enclose each bilateral otic (ear) chamber inside the skull (see Figs 3.3–3.5). Paired sphenotics formthe most posterior dorsolateral part of the orbit roof. Pairedpterotics form the posterior outer corners of the neurocraniumand enclose the horizontal semicircular canal. Pairedprootics form the floor of the neurocranium and enclosethe utriculus of the inner ear. Paired epiotics, more recently calledepioccipitals, lie posterior to the parietals and lateral to the supraoccipital and contain the posterior vertical semicircular canal. The median process of the posttemporal, by which the pectoral girdle is attached to the posterior region of the skull, attaches to the epiotics. The epioticsenclose part of the posterior semicircular canal. Pairedintercalars (or opisthotics) fit between the pterotics andexoccipitals and articulate with the lateral process of thepost temporal. There is only one pair of entirely dermal bones in the otic region, the paired parietals, which roof part of the otic region and articulate with the frontal anteriorly, the supraoccipital medially, and the epioticsposteriorly.

Three sets of cartilage bones, one pair plus two medianbones, form the cranial base. Paired lateral exoccipitalsform the sides of the foramen magnum (Fig. 3.7), which isthe passageway for the spinal cord. The median basioccipitalis the most posteroventral neurocranium bone and articulates with the first vertebra. The dorsal mediansupraoccipital bone usually bears a posteriorly directed supraoccipital crest that varies among teleost’s from a slight ridge to a prominent crest. The only dermal bone in thebasicranial region is the median Para sphenoid, a long crossshaped bone that articulates with the vomer anteriorly and forms the posteroventral base of the skull.

Rear view of the skull of a bonito (Sarda chiliensis). The crosses indicate points of attachment of epineural bones. From Collete and Chao (1975) 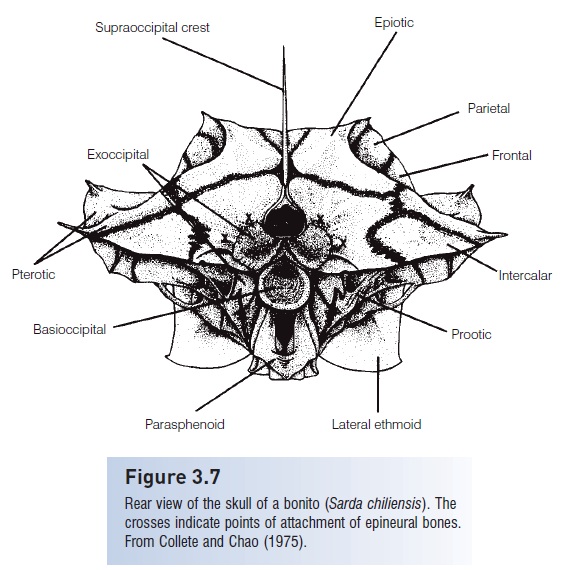