Fish muscle is structurally similar to that of other vertebrates,and fishes possess the same three kinds of muscles,but differ in that a greater proportion (40–60%) of the mass of a fish’s muscle is made up of locomotory muscle.

Fish muscle is structurally similar to that of other vertebrates, and fishes possess the same three kinds of muscles, but differ in that a greater proportion (40–60%) of the mass of a fish’s muscle is made up of locomotory muscle. Among the three types, skeletal muscle is striated and comprises most of a fish’s mass, other than the skeleton.Smooth muscle is no skeletal, involuntary, and mostly associated with the gut but is also important in many organs and in the circulatory system. Cardiac, or heart, muscle is non skeletal but striated and is found only in the heart.

Hagfishes and lampreys have a simple arrangement of striated skeletal muscles. These primitive fishes have no paired appendages to interrupt the body musculature. Skeletal muscle behind the head is uniformly segmental and is composed of shallow W-shaped myomeres.

In jawed fishes, two major masses of skeletal muscle lieon each side of the fish, divided by the horizontal connective tissue septum. The epaxial muscles are the upper pair, and the hypaxials are the lower pair (see Fig. 8.1). A third, smaller, wedge-shaped mass of red muscle lies under the skin along the horizontal septum. This band of red muscle is poorly developed in most bony fishes although it is much more extensive and used for sustained swimming in fishes such as the tunas (see Heterothermic fishes). 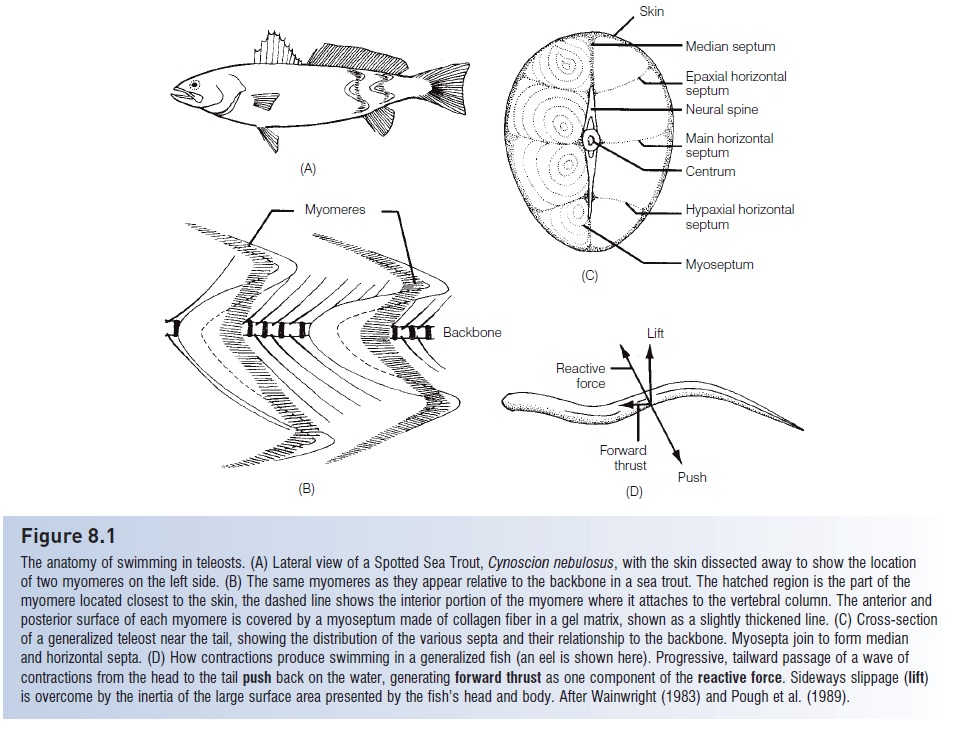 Seven principal muscles are involved in opening and closing the jaws, suspensorium, and operculum during feeding and breathing (Fig. 4.1). The major muscles are theadductormandibulae, large muscles with several sections that insert on the inner surface of the upper and lower jaw and originateon the outer face of the suspensorium, the chain of bones that suspend the jaws from the neurocranium. The adductor mandibulae function to close the jaws (see also Fig. 8.4). The levator arcus palatinioccupies the postorbital portion of the cheek. The dilator operculi, the adductoroperculi, and the levator operculi insert on the opercle. The adductor arcus palatinioriginates from the ventrolateral margin of the parasphenoid and underlies the orbit. The adductor hyomandibulae originates on the prootic andexoccipital and inserts on the hyomandibula. In addition, pharyngealmuscles, or retractores arcuum branchialium,run from the upper pharyngeal bones to thevertebralcolumn and function in operating the pharyngeal jaws. 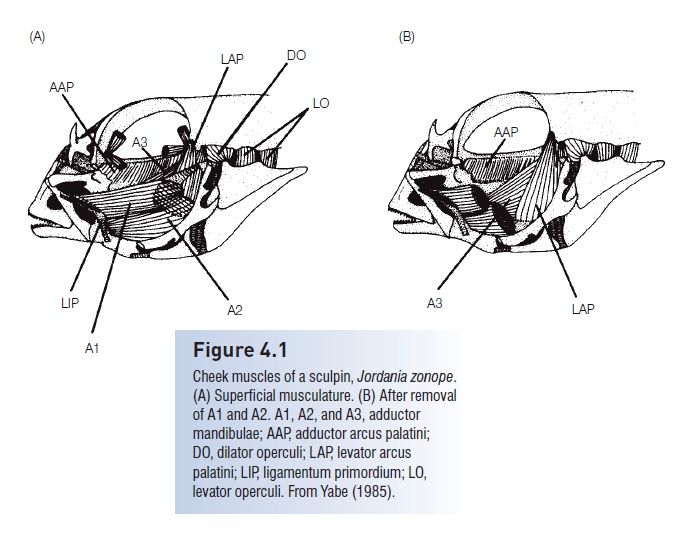 Cheek muscles of a sculpin, Jordania zonope.(A) Superficial musculature. (B) After removal of A1 and A2. A1, A2, and A3, adductor mandibulae; AAP, adductor arcus palatini; DO, dilator operculi; LAP, levator arcuspalatini; LIP, ligamentum primordium; LO,levator operculi. From Yabe (1985).

The dorsal gill-arch musculature, aspects of the associated gill-arch skeleton, the transversus ventral is 4, and the semicircular ligament were recently described for many species of fishes in over 200 families and over 300 genera of bony fishes in a massive, superbly illustrated study by Springer and Johnson (2004). They found that the transversus dorsalis was much more complex than previously recognized and was useful for defining various groups of fishes. A cladistics analysis of the dorsal gill-arch musculature and gillarch skeletal characters (Springer & Orrell 2004) showed groups such as the Percopsiformes and the Ophidiiformesto be monophyletic, whereas other groups such as the Paracanthopterygii and the Labroidei were polyphyletic.

Extrinsic eye muscles move the eye within its orbit. Eye muscles are evolutionarily very conservative, in that most vertebrates have the same three pairs of these striated muscles: inferior or ventral and superior or dorsal oblique; inferioror ventral and superior or dorsal rectus; and external orlateral and internal or medial rectus(Fig. 4.2). Eye muscles are innervated by three cranial nerves: superior oblique by the trochlear (IV), external rectus by the abducens(VI), and the other four by the oculomotor (III). Posteriorly, the eye muscles insert into dome-shaped cavities calledmyodomes in actinopterygian fishes. A suspensory ligament above the lens and aretractor lentis muscle below form the focusing muscle of the eye.

Eye muscles have been converted into two remarkable structures in fishes: an electric organ in the Electric Stargazer (Astroscopus, Uranoscopidae) and heater organs in two suborders of perciform fishes (Xiphioidei andScombroidei). The upper edges of the four uppermost eye muscles form an electric organ in the Electric Stargazer. During development, the portion from the superior rectus loses its innervation from the trochlear nerve, and the portion from the external rectus loses its connection with the abducens, so that the electric organ in adult stargazers is innervated solely by the oculomotor nerve. Large stargazers can produce an electric discharge from these muscles strong enough to incapacitate a careless human handler. Their usual function is presumably to stun prey or deter predators. In billfishes (Istiophoridae andXiphiidae), the superior rectus has been converted into a heat-producing muscle that keeps the eye warm during incursions into deep, cold waters. In the Butterfly Mackerel Gasterochisma (Scombridae), the external rectus is the muscle that becomes the heater organ (Block 1991), showing independent evolution of this character (Heterothermic fishes). 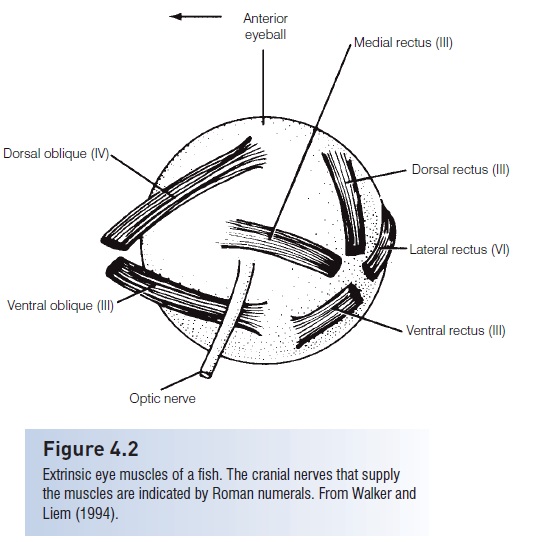 Extrinsic eye muscles of a fish. The cranial nerves that supplythe muscles are indicated by Roman numerals. From Walker andLiem (1994).

Fish sonic muscles are the fastest muscles in vertebrates(Parmentier et al. 2006). They are specialized fastcontractingstriated muscles. Based on their origins andinsertions, there are two types of sonic muscles. Intrinsicsonic muscles completely attach to the wall of the gasbladder as in toadfishes (Batrachoididae) and sea robins(Triglidae).Extrinsic sonic muscles have various origins and insertions but generally these paired muscles insert on the gas bladder or a neighboring structure. They are found incusk-eels (Ophidiiformes), squirrelfishes (Holocentridae),and croakers (Sciaenidae).

Smooth muscles line the walls of the digestive tract. They are arranged in bundles of longitudinal and circular muscles that work in opposition to one another to permit peristaltic transport of food. Smooth muscles are associated with the swim bladder and move products along the ducts of the reproductive and excretory tracts. The lens muscle of the eye, also a smooth muscle, moves the lens, dilating or constricting it automatically in response to changing light.

Cardiac or heart muscle is dark red involuntary muscle. Itis thickest in the walls of the ventricle.

Ligaments are nonelastic strands of fibrous connective tissue that serve to attach bones and/or cartilages to one another. Names of ligaments usually include their initial and terminal points. Some, however, are named after their shape or after persons. Baudelot’s ligament is a strong white ligament that originates on the ventrolateral aspect of an anterior vertebra (usually the first) in lower teleost’s or on the posterior part of the skull (usually the basioccipital)in advanced teleost`s and inserts on the inner part of the cleithrum. Baudelot’s ligament helps anchor the pectoral girdles to the sides of the fish.

Faced with the conflicting demands of low-speed, economical cruising versus short bursts of maximum speed, fishes have solved the problem by dividing the locomotory system into two systems with different fiber types, white and red(Bone 1978; Webb 1993). White muscle makes up themajority of the postcranial body of most fishes. It is used anaerobically in short-duration, burst swimming but fatigues quickly. White muscle gets its color because its fibers lack myoglobin and because it has comparatively little vascularization and hence a limited oxygen supply. White muscle fibers are relatively large in diameter, up to 300 μm. White muscle fibers have relatively few, small mitochondria, with energy resulting from anaerobic glycolysis. Muscle glycogenis depleted rapidly during contraction, producing large amounts of lactates that may require up to 12 h for full recovery after glycogen depletion (see Respiration and ventilation).

Red muscle usually forms a thin, lateral, superficial sheet under the skin between the epaxial and hypaxial muscle masses on each side of the fish. Red muscle is much better developed in muscles involved in sustained swimming, such as lateral red muscle in tunas and pectoral fin muscles in wrasses and parrotfishes. Red muscle is hard to fatigue because it is highly vascularized and is therefore provided with a rich oxygen supply. The red color is caused by abundant myoglobin. In contrast with white muscle, red muscle has small-diameter fibers (18–75 μm) and high blood volume (three times the number of capillaries of white muscle per unit weight). Mitochondria in red muscle are large and abundant and energy is supplied by the aerobic oxidation of fats. During exercise, little change occurs in muscle glycogen or in the build-up of lactates; recovery after exercise is rapid. The strong taste of the prominent lateral red muscle in tunas (chiai in Japanese) leads to its being picked out from cooked tuna prior to canning for human consumption. (It is canned for cat food, which is why tuna cat food smells, and tastes, so strong.)

Lamnid sharks and advanced tunas (tribe Thunnini)have more and deeper portions of red muscle than other fishes. A countercurrent heat exchanger system (see Heterothermic fishes) between the arterioles and venules of the cutaneous artery and vein ensures that the heat produced by muscular contraction remains in those tissues and is not carried off by the circulatory system to be lost at the gills. In at least the Atlantic Bluefin Tuna (Thunnusthynnus), this heat exchanger may function in actual regulation of body temperature (Carey & Lawson 1973). Cross-sectionsof the body in representative scombrids show increasing development and internalization of the red muscles phylogenetically from mackerels to tunas (Sharp &Pirages 1978).

Some fishes, such as the Scup (Stenotomus chrysops),also have another type of muscle. Pink muscle is intermediate between red and white muscle in levels of myoglobin, giving it a pink color, and is also intermediate in the otherdescriptive and metabolic qualities detailed above (Webb1993). Like red muscle, pink muscle is used for sustained swimming and is recruited after red muscle but before white muscle.

Another variation on muscle color and function occurs in the Antarctic notothenioid family Channichthyidae (seePolar regions). Many channichthyids haveblood but lack hemoglobin, leading them to being called “bloodless”. They even lack typical red muscle, instead having yellow muscle in the heart and in the adductor and abductor muscles of the pectoral fin. The protein composition of yellow muscle is similar to that of normal red muscle in fishes with hemoglobin (Hamoir & Geradin-Otthiers1980).

Fishes in six different evolutionary lineages have developed the ability to amplify the usual electrical production associated with muscle contractions (see Electroreception).The muscles involved in electro generation are modified skeletal muscles. Caudal skeletal muscles, and sometimes lateral body muscles as well, are modified forelectrogeneration in the Rajidae, Mormyridae, Gymnotiformes, and Malapteruridae. In torpedo rays (Torpedinidae, Narcinidae), hypo branchial muscles are involved, whereas an extrinsic eye muscle generates strong electrical discharges in the teleost an Electric Stargazer, Astroscopus(see above).Only a few of the major muscles have been discussed here; see Stiassny (1999) and Winterbottom (1974) for a complete treatment. 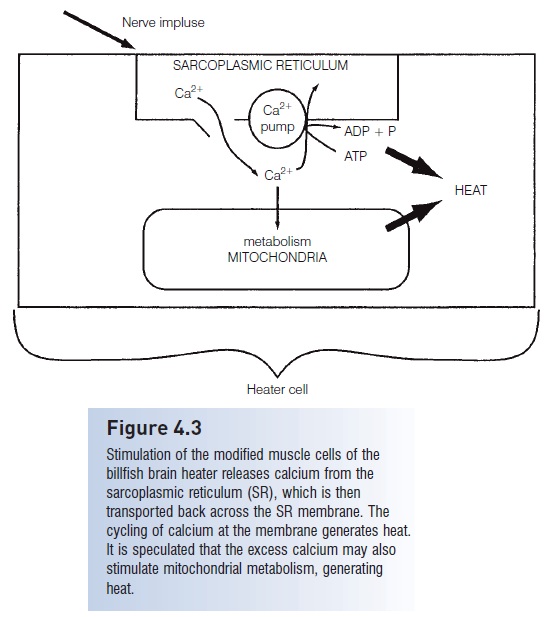 Stimulation of the modified muscle cells of thebillfish brain heater releases calcium from thesarcoplasmic reticulum (SR), which is then transported back across the SR membrane. The cycling of calcium at the membrane generates heat. It is speculated that the excess calcium may also stimulate mitochondrial metabolism, generating heat.