The cardiovascular system serves all bodily functions butis most closely associated with respiration, excretion,osmoregulation, and digestion.

The cardiovascular system serves all bodily functions but is most closely associated with respiration, excretion, osmoregulation, and digestion. The cardiovascular system is the system of arteries, veins, and capillaries that carry respiratory gases, wastes, excretory metabolites, minerals, and nutrients. The cardiovascular systems of only a few fish species have been investigated extensively, most notably in hagfish, dogfish, skate, Port Jackson shark, trout, salmon, carp, cod, eel, and lungfishes (see Randall 1970; Satchell1991; Farrell 1993).

The basic pattern of blood flow in fishes involves a single pump,single-circuit system – from the heart to the gills to the body and back to the heart (Fig. 4.4).The heart is located posterior and ventral to the gills in all fishes, although it is located farther anterior in teleost’s than in chondrichthyans. It lies in a membranous pericardial cavity that is lined with parietal pericardium. The basic fish heart consists of four chambers in series: venous blood enters (i) the sinus venosus (a thin-walled sac) from the ducts of Cuvier and the hepatic veins; it next flows into(ii) the atrium; then into (iii) the ventricle, a thick-walled pump; and finally blood flows out of the heart into (iv) the onusor bulbus arteriosus (Farrell & Jones 1992). Theocons arteriosus is a barrel-shaped chamber invested with cardiac muscle, present in Chondrichthyes and lungfishes(Dipnoi). The muscular conus arteriosus is replaced by thenonmuscular bulbus arteriosus in actinopterygian fishes. The bulbus is an onion-shaped elastic reservoir that is passively dilated with blood as it exits the ventricle. The bulbus dampens pressure oscillations, thereby providing continuous rather than pulsed blood supply to the body. 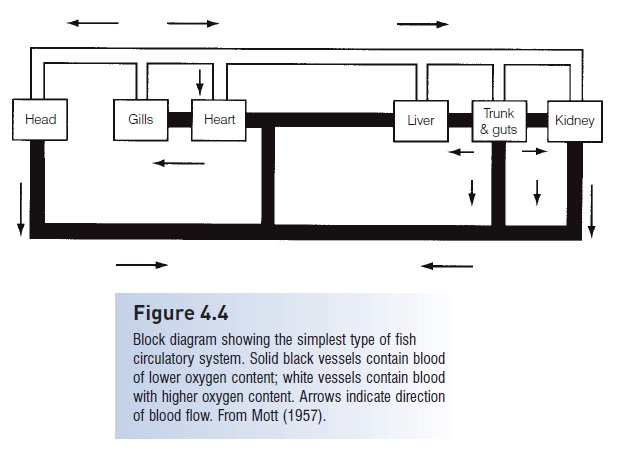 In lungfishes, the atrium and ventricle are partly divided by a partition, partially separating oxygenated and deoxygenated blood, a step toward development of the twopump,four-chambered heart of tetrapod’s. This division is least complete in the Australian Neoceratodus, which is least dependent on atmospheric air, and is most complete in the South American Lepidosiren, which is most dependent on atmospheric air for respiration.

Heart valves prevent backflow of blood and maintain pressure in the circulatory system. Valves may be present between each of the sections of the heart.Sinoauricularvalves (usually composed of both endocardial and myocardialmuscle) separate the sinus venosus and atrium. Auriculoventricular or atrioventricular valvesvary in number depending on the group: Chondrichthyes and most bony fishes have two rows of valves; the Bowfin has four rows, the North American Paddlefish has five rows, whereas garsand bichirs (Polypterus) have six rows.

These valves are absent in lungfishes, which do have valves in the conusarteriosus. The number of ventriculobulbar valves is related to the length of the conus. There is usually one or, rarely, two in bony fishes, two to seven in Chondrichthyes, and up to 74 in eight rows in gars. Valves outside the heart region can occur in various parts of the circulatory system of fishes, such as segmental arteries and veins in the caudalregions of the Port Jackson Shark and teleost veins.

Blood is supplied to heart muscle from anterior hypobranchial arteries in Chondrichthyes, Actinopterygii, andNeoceratodus. In Lepidosiren, the coronary supply originates from the second afferent artery. Hagfishes have nospecial coronary circulation; they also differ in otherregards. Nervous innervation of all fish hearts, except inthe hagfish, is from the vagus. Hagfishes also have severalaccessory hearts in parts of the venous system (Farrell1993).

Blood vessels of the gills and head

The number of afferent branchial arteries bringing oxygen deficient blood to the gills from the ventral aorta varies among different groups of fishes. Hagfishes and lampreys have seven to 14, the number depending on the number of gill pouches. Most Chondrichthyes have four, but sharks and rays with more gills have more arteries, such as Hexanchus,the Six-gilled Shark, which has five, and the SevengilledShark, Heptranchias, which has six. Lungfishes have four to five afferent branchial arteries, whereas bony fisheshave four (Fig. 4.5). 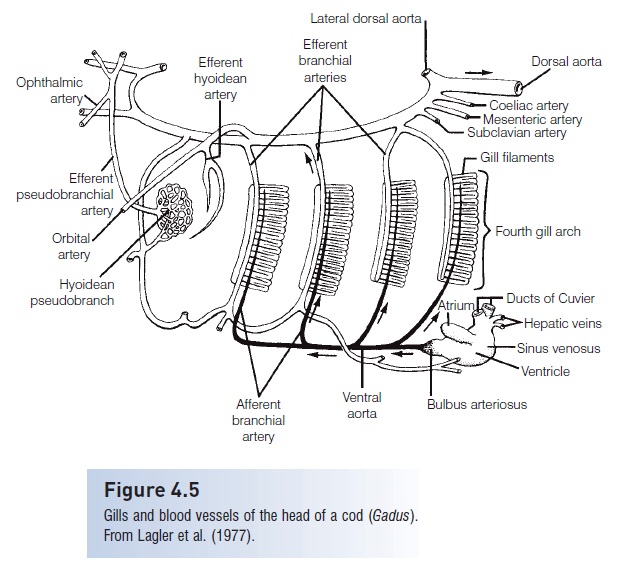 Efferent branchial arteries bring oxygenated blood from the gills to the rest of the body. These arteries merge toform the dorsal aorta, the largest and longest artery in a fish’s body. Efferent branchial arteries number one perhemibranch in Chondrichthyes and one per holobranch in bony fishes.Internal carotid arteries run from the aorta to the brain. Major veins such as the facial, orbital, postorbital, and cerebral join into paired anterior cardinal veins,which empty into the common cardinal (also called the duct of Cuvier) and then into the heart. The jugular vein collects blood from the lower head and also empties into the common cardinal in Actinopterygii.

Many fishes have a pseudo branch, a small structure under the operculum composed of gill-like filaments that mayprovide oxygenated blood to the visual system.

Blood vessels of the body

The dorsal aorta is the main route of transport of oxygenated blood from the gills to the rest of the body (Fig. 4.6).It lies directly ventral to the vertebral column in the trunk region and gives off major vessels and segmental arteries. Thesubclavian artery goes to the pectoral girdle, the coeliaco-mesenteric artery supplies the viscera, and the iliac or renal artery supplies the kidneys. The dorsal aorta becomes known as the caudal artery upon entering the closed haemalcanal of the caudal vertebrae.

The major return route of blood from most of the body is the post cardinal vein. It is best developed on the rightside and empties into the common cardinal or ducts of Cuvier, then into the sinus venosus, and finally into the heart proper. 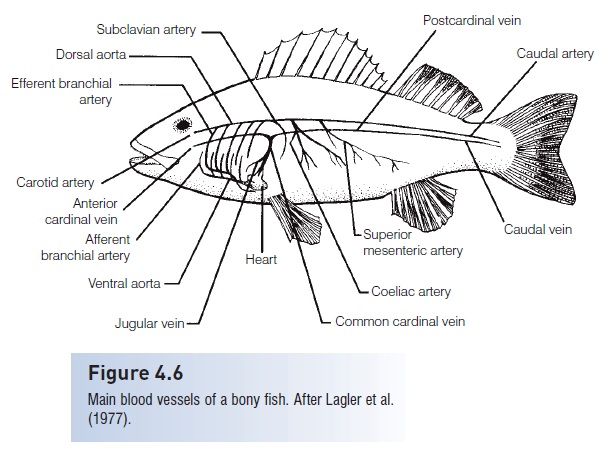 In the advanced tunas (tribe Thunnini), an additional pair of large arteries, the cutaneous arteries, exit the dorsalaorta posterior to the coeliaco-mesenteric artery and run laterally between the ribs. As these arteries approach the fish’s skin, they divide into two vessels, each of which runs posteriorly, sending out arterioles to the underlying red muscle. After passing through an extensive network of capillaries– the countercurrent heat exchanger that retains metabolic heat in the red muscle – the cutaneous vein returns the unheated blood to the heart. Phylogenetically, the most advanced tunas show the greatest development of the subcutaneous circulatory system (Fig. 4.7). 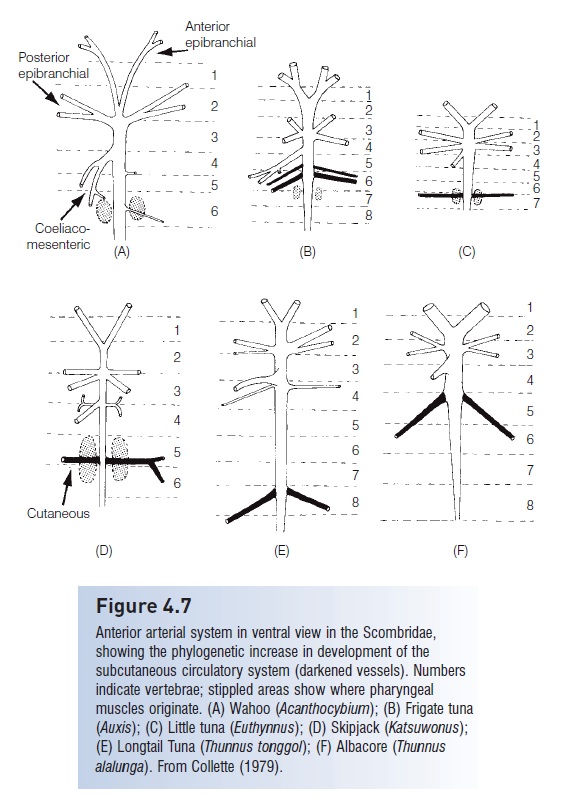 The lymphatic system is derived from the venous part of the blood vascular system and is similar to that of other vertebrates.

Lymph is collected by paired and unpaired ducts and sinuses that empty into the main blood system. Hagfishes and lampreys have more connections to the venous system; they essentially have a hemolymph system. At least some species of lampreys and bony fishes have contractile lymph “hearts”. Chondrichthyes have lymph vessels but do not have sinuses or contractile lymph “hearts”.

Paralleling the trend in heart size discussed above, the volume of blood in teleost`s is less than in Chondrichthyes, and both have lower blood volumes than tetrapod’s. Hagfishes and lampreys have the greatest volume among fishes. Blood itself is composed of plasma and blood cells. Plasma contains dissolved minerals, digestive products, waste products, enzymes, antibodies, and dissolved gases, but few detailed analyses of fish blood have been published.

Red blood cells (RBCs) account for nearly 99% of oxygen uptake. RBCs are nucleated, yellowish-red, oval cells in most fishes but are round in lampreys. Fishes have relatively fewer and larger RBCs than do mammals. Human RBCs measure 7.9 μm across, whereas fish RBCs range from 7 μm in some wrasses to relatively giant 36 μm cells in the African lungfishes, Protopterus. RBCs are absent innotothenioids (see above) and in the leptocephalus larvae of eels.