The kidneys are paired longitudinal structures located retroperitoneally(outside of the peritoneal cavity), ventral to the vertebral column.

The kidneys are paired longitudinal structures located retroperitoneally(outside of the peritoneal cavity), ventral to the vertebral column. Left and right kidneys frequently join together to form soft black material under the vertebrae from the back of the skull to the end of the body cavity. The kidneys are one of the primary organs involved in excretion and osmoregulation (see Osmoregulation, excretion, ion and pH balance). Three kinds of kidneys are present in vertebrates: pronephros, mesonephros, andmetanephros. A pronephros is present in larval fishes, amesonephros is the functional kidney in Actinopterygii, andthe metanephros is the kidney present in tetrapod’s. Kidney tubules are involved with moving sperm in some fishes, so the two systems are sometimes discussed as the urogenital system.

The pronephros has nephrostomes, anterior funnels thatempty into the body cavity by way of pronephric tubules.

Adult hagfishes have an anterior pronephros and a posteriormesonephros, but it appears to be the mesonephrosthat is the functional kidney (Hickman & Trump 1969).Lampreys have a pronephros until they reach about 12–15 mm when they develop a mesonephros during metamorphosis. A pronephros is a transitional kidney that appears during ontogenetic development of actinopterygianlarvae and then is replaced by a mesonephros as the fish grows.

The mesonephros is a more complex kidney that does not have funnels emptying into the body cavity. The mesonephrosconsists of a number of renal corpuscles, each composed of a glomerulus surrounded by a Bowman’scapsule. The glomerulus receives blood from an afferent arteriole from the dorsal aorta. The glomerulus acts as anultrafilter to remove water, salts, sugars, and nitrogenous wastes from the blood. The filtrate is collected in Bowman’s capsule and then passes along a mesonephric tubule where water, sugars, and other solutes are selectively resorbed. Marine and freshwater fishes differ considerably in kidney structure, reflecting the different problems faced by animals living in solutions of very different solute concentrations(see  Osmoregulation, excretion, ion and pH balance). Freshwater fishes have larger kidneys with more and larger glomeruli, up to 10,000 per kidney and measuring 48–104 μm across (mean of several freshwater species=71 μm). The glomeruli of marine fishes are only27–94 μm across (mean of several marine species =48 μm).

Urine contains water plus creatine, creatinine, urea, ammonia, and other nitrogenous waste products. Only 3–50% of the nitrogenous wastes are excreted through the urine (see Table 7.2), and much of this is as ammonia; most of the rest is excreted as ammonia at the gills during respiration. Some fishes have a storage organ for urine that has been called a “urinary bladder”, but it is a posterior evaginationof the mesonephric ducts, making it mesodermal in origin and not homologous with the endodermal derived urinary bladder of tetrapod’s.

Freshwater fishes produce copious amounts of highly dilute urine to avoid “waterlogging” by the large amount of water diffusing in through all semipermeable membranes(see Fig. 7.3). Marine fishes drink sea water to correct dehydration and excrete a low volume of highly concentrated urine. Most nitrogenous wastes are excreted extrarenally through the gills. 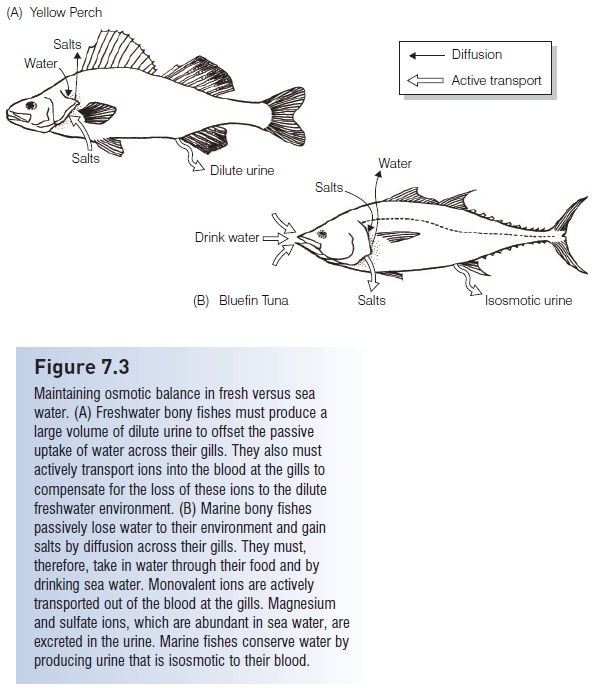 Some fishes are a glomerular, lacking glomeruli in their kidneys. At least 30 species of a glomerularteleost`s areknown from seven different families of mostly marine fishes, such as Batrachoididae, Ogcocephalidae, Lophiidae,Antennariidae, Gobiesocidae, Syngnathidae, and Cottidae(Hickman & Trump 1969; Bone et al. 1995). A glomerularkidneys are unable to excrete sugars and so are therefore of great interest to physiologists studying the function of glomeruli. It would be particularly interesting to study kidney function of freshwater members of the above families to see how they meet the problem of bailing out excess water if they lack glomeruli in their kidneys.