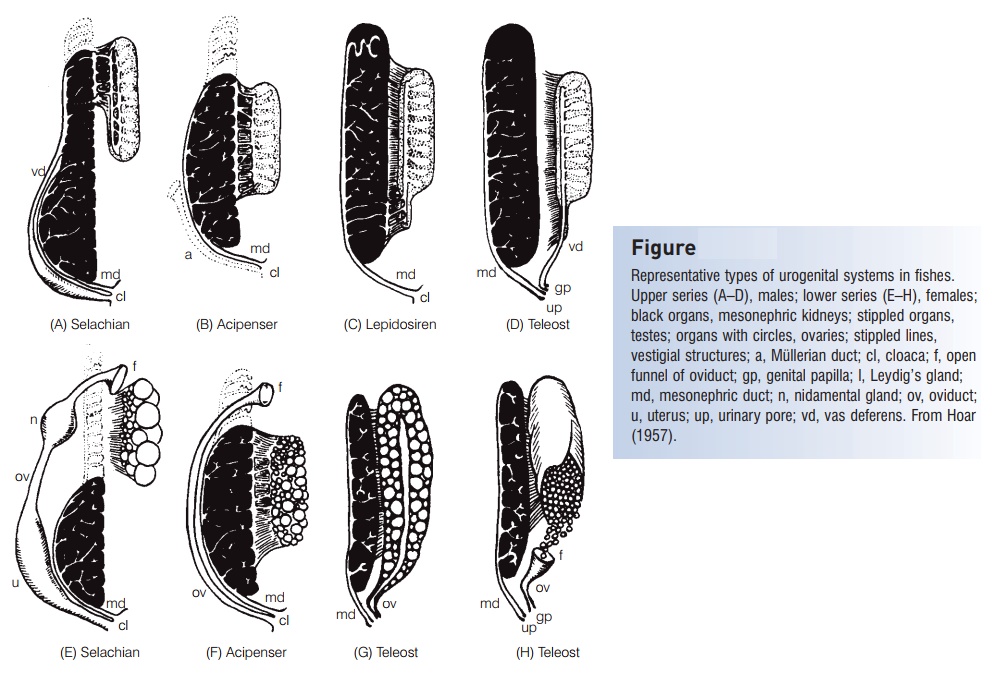 As in tetrapod’s, the sexes in fishes are usually separate (dioecious),with males having testes that produce sperm, and females having ovaries that produce eggs. “Fishes as a group exemplify almost every device known among sexually reproducing animals; indeed, they display some variations which may be unique in the animal kingdom” (Hoar 1969,p. 1).

The testes are internal, longitudinal, and usually paired. They are suspended by lengthwise mesenteries known as mesorchia. The testes lie lateral to the gas bladder when one is present. Kidney tubules and ducts serve variously among different groups of fishes to conduct sperm to the outside. Testes may constitute as much as 12% of body weight in some species at sexual maturity, although this proportion is usually smaller.

Hagfishes and lampreys have a single testis. Sperm isshed into the peritoneal cavity and then passes through paired genital pores into a urogenital sinus and out through a urogenital papilla.

Secretions of Leydig’s gland are involved in spermatophoreproduction. The sperm then go through a sperm duct, which is a modified mesonephric duct, and into aseminal vesicle, a temporary storage organ that is also secretory.

Among Actinopterygii, the situation is similar, but no true seminal vesicles or sperm sacs are present. Marinecatfishes (Ariidae), gobies (Gobiidae), and blennies (Blenniidae)have secondarily derived structures that have also been called seminal vesicles, but these are glandular developments from the sperm ducts and are not comparable to structures with the same names in tetrapod’s. These vesicles provide secretions that are important in sperm transfer or other breeding activities.

Lungfishes, sturgeons, and gars make varying use of kidney tubules and mesonephric (Wolffian) ducts (Fig.4.10). In the Bowfin (Amia), vasa efferentia bypass the kidney and go to a Wolffian duct. In Polypterus and theTeleostei, there is no connection between the kidney and gonads at maturity. The sperm duct is new and originates from the testes. Thus the sperm duct of more primitive fishes such as the Chondrichthyes and Chondrostei is not homologous with that in the Teleostei. 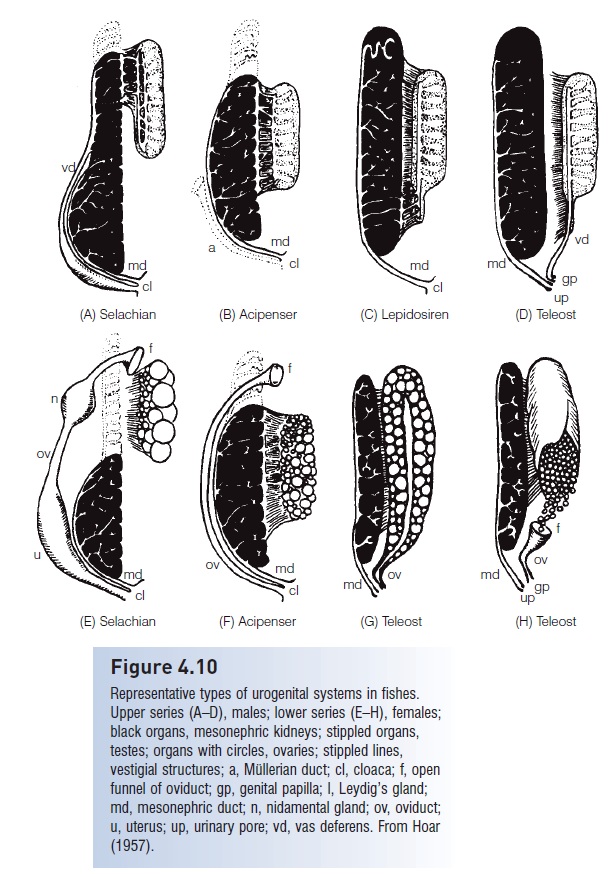 The tubular structure of the teleost testis has two basic types distinguished by the distribution of spermatogonia,the sperm-producing cells. In most teleost`s,spermatogonia occur along the entire length of the tubules, but in atherinomorphfishes the spermatogonia are confined to the distal end of the tubules (Grier 1981).

The ovaries are internal, usually longitudinal, and primitively paired but are often variously fused and shortened. Sometimes only one ovary is present in adults, as in some needlefishes (Belonidae). The number or relative lengths of the ovaries are a useful taxonomic character in some fishes,such as the needlefishes. The ovaries are suspended by a pair of lengthwise mesenteries, the mesovaria. The ovaries are typically ventral to the gas bladder. Kidney tubules and ducts are not used to transport eggs. Ovary mass can be ashigh as 70% of body weight and tends to increase with body size of individual females.

Ovaries of hagfishes and lampreys have the same basicstructure as do the male testes. There is a single ovary, and the eggs are shed into the body cavity and then pass throughpaired genital pores and out through a urogenital papilla.In Chondrichthyes, the ovarian capsule is not continuous with the oviduct so eggs are shed into the body cavity, the gymnovarian condition. The eggs enter the funnel of the oviduct, which is a Müllerian duct, not a modifiedmesonephric duct; it develops as a posterior continuation of the ovarian tunic. The anterior part of the oviduct isspecialized to form a nidamental or shell gland where fertilizationtakes place. The nidamental gland secretes a membranearound the fertilized egg. In oviparous (egg-laying)taxa, the membrane is horny, composed of keratin. Thenidamental gland may function as a seminal receptacle where sperm are nourished before fertilization. In viviparous(live-bearing) species, the posterior part of the oviductis modified to form a uterus, which houses the developingembryo.

In osteichthyan fishes, the primitive gymnovarian condition is found in lungfishes, sturgeons, and the Bowfin. Ingars and most teleost`s, the lumen of the hollow ovary is continuous with the oviduct, termed the cyst ovariancondition. In trout’s and salmons (Salmonoidei) and some other teleost’s, the oviducts have been secondarily lost in whole or in part, so the eggs are shed into the peritoneal cavity and reach the outside through pores.