A large network can often get into various kinds of trouble due to routers (dropping too many packets), hosts( going down) etc.

A large network can often get into various kinds of trouble due to routers (dropping too many packets), hosts( going down) etc. One has to keep track of all these occurence and adapt to such situations. A protocol has been defined. Under this scheme all entities in the network belong to 4 classes:

The managed nodes can be hosts,routers,bridges,printers or any other device capable of communicating status information to others. To be managed directly by SNMP, a node must be capable of running am SNMP management process, called SNMP agent. Network management is done by management stations by exchanging information with the nodes. These are basically general purpose computers running special management software. The management stations polls the stations periodically. Since SNMP uses unreliable service of UDP the polling is essential to keep in touch with the nodes. Often the nodes send a trap message indicating that it is going to go down. The management stations then periodically checks (with an increased frequency) . This type of polling is called trap directed polling. Often a group of nodes are represented by a single node which communicates with the management stations. This type of node is called proxy agent. The proxy agent can also server as a security arrangement. All the variables in these schemes are called Objects. Each variable can be referenced by a specific addressing scheme adopted by this system. The entire collection of all objects is called Management Information Base (MIB). The addressing is hierarchical as seen in the picture.

Internet is addressed as 1.3.61. All the objects under this domain has this string at the beginning. The information are exchanged in a standard and vendor-neutral way . All the data are represented in Abstract Syntax Notation 1 (ASN.1). It is similar to XDR as in RPC but it

have widely different representation scheme. A part of it actually adopted in SNMP and modified to form Structure Of Information Base. The Protocol specifies various kinds of messages that can be exchanged between the managed nodes and the management station. 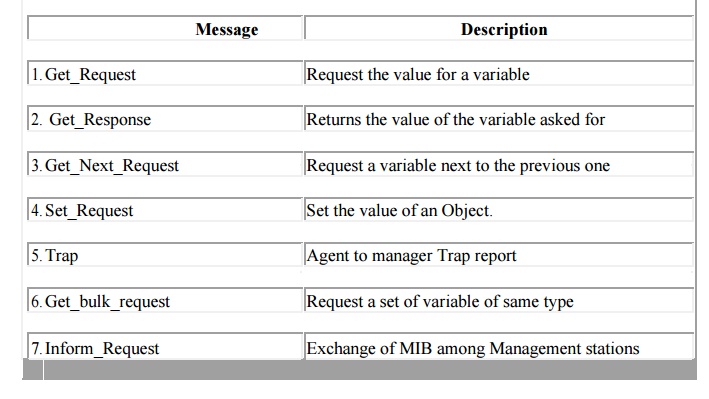 1. Get_Request : Request the value for a variable

2. Get_Response : Returns the value of the variable asked for

3. Get_Next_Request : Request a variable next to the previous one

4. Set_Request : Set the value of an Object.

6. Get_bulk_request : Request a set of variable of same type

The last two options have been actually added in the SNMPv2. The fourth option need some kind of authentication from the management station.

Following is an Example of the kind of address one can refer to when fetching a value in the table :-