Recent advances in technology have changed our use of audio and video. In the past, we listened to an audio broadcast through a radio and watched a video program broadcast through a TV. We used the telephone network to interactively communicate with another party. But times have changed. People want to use the Internet not only for text and image communications, but also for audio and video services.

We can divide audio and video services into three broad categories:

1.  Streaming stored audio/video, the files are compressed and stored on a server. A clientdownloads the files through the Internet.

2. Streaming live audio/video, a user listens to broadcast audio and video through the Internet.

3. Interactive audio/video, people use the Internet to interactively communicate with oneanother.

Before audio or video signals can be sent on the Internet, they need to be digitized.

When sound is fed into a microphone, an electronic analog signal is generated which represents the sound amplitude as a function of time. The signal is called an analog audio signal. An analog signal, such as audio, can be digitized to produce a digital signal. According to the Nyquist theorem, if the highest frequency of the signal is f, we need to sample the signal 21 times per second. There are other methods for digitizing an audio signal, but the principle is the same.

A video consists of a sequence of frames. If the frames are displayed on the screen fast enough, we get an impression of motion. The reason is that our eyes cannot distinguish the rapidly flashing frames as individual ones. There is no standard number of frames per second; in North America 25 frames per second is common. However, to avoid a condition known as flickering, a frame needs to be refreshed. The TV industry repaints each frame twice. This means 50 frames need to be sent, or if there is memory at the sender site, 25 frames with each frame repainted from the memory.

To send audio or video over the Internet requires compression

In predictive encoding, the differences between the samples are encoded instead of encoding all the sampled values. This type of compression is normally used for speech. Several standards have been defined such as GSM (13 kbps), G.729 (8 kbps), and G.723.3 (6.4 or 5.3 kbps).

The most common compression technique that is used to create CD-quality audio is based on the perceptual encoding technique. As we mentioned before, this type of audio needs at least 1.411 Mbps; this cannot be sent over the Internet without compression. MP3 (MPEG audio layer 3), a part of the MPEG standard (discussed in the video compression section), uses this technique.

Streaming live audio/video is similar to the broadcasting of audio and video by radio and TV stations. Instead of broadcasting to the air, the stations broadcast through the Internet. There are several similarities between streaming stored audio/video and streaming live audio/video. They are both sensitive to delay; neither can accept retransmission. However, there is a difference. In the first application, the communication is unicast and on-demand. In the second, the communication is multicast and live. Live streaming is better suited to the multicast services of IP and the use of protocols such as UDP and RTP. 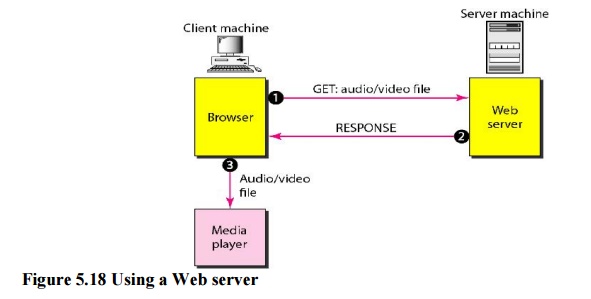 In real-time interactive audio/video, people communicate with one another in real time. The Internet phone or voice over IP is an example of this type of application. Video conferencing is another example that allows people to communicate visually and orally.