One of the most popular Internet services is electronic mail (e-mail). The designers of the Internet probably never imagined the popularity of this application program.

One of the most popular Internet services is electronic mail (e-mail). The designers of the Internet probably never imagined the popularity of this application program. Its architecture consists of several components. At the beginning of the Internet era, the messages sent by electronic mail were short and consisted of text only; they let people exchange quick memos.

To explain the architecture of e-mail, we give four scenarios. We begin with the simplest situation and add complexity as we proceed. The fourth scenario is the most common in the exchange of email.

In the first scenario, the sender and the receiver of the e-mail are users (or application programs) on the same system; they are directly connected to a shared system. The administrator has created one mailbox for each user where the received messages are stored. A mailbox is part of a local hard drive, a special file with permission restrictions. Only the owner of the mailbox has access to it. When Alice, a user, needs to send a message to Bob, another user, Alice runs a user agent (VA) program to prepare the message and store it in Bob's mailbox. The message has the sender and recipient mailbox addresses (names of files). Bob can retrieve and read the contents of his mailbox at his convenience, using a user agent.

In the second scenario, the sender and the receiver of the e-mail are users (or application programs) on two different systems. The message needs to be sent over the Internet. Here we need user agents (VAs) and message transfer agents (MTAs).

In the third scenario, Bob, as in the second scenario, is directly connected to his system. Alice, however, is separated from her system. Either Alice is connected to the system via a point-to-point WAN, such as a dial-up modem, a DSL, or a cable modem; or she is connected to a LAN in an organization that uses one mail server for handling e-mails-all users need to send their messages to this mail server. 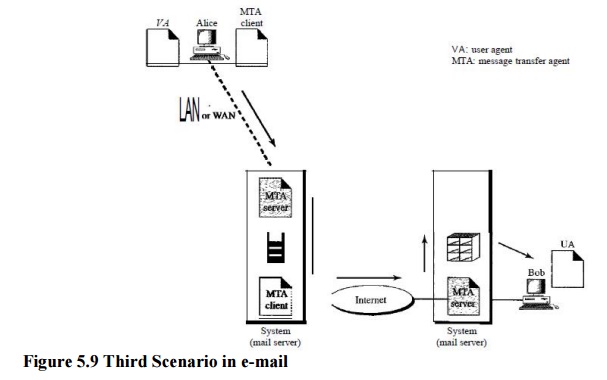 In the fourth and most common scenario, Bob is also connected to his mail server by a WAN or a LAN. After the message has arrived at Bob's mail server, Bob needs to retrieve it. Here, we need another set of client/server agents, which we call message access agents (MAAs). Bob uses an MAA client to retrieve his messages. The client sends a request to the MAA server, which is running all the time, and requests the transfer of the messages. 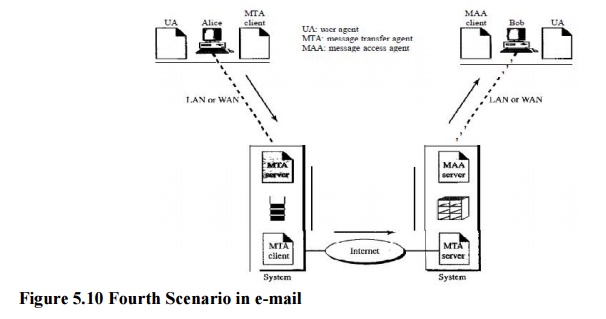 The first component of an electronic mail system is the user agent (VA). It provides service to the user to make the process of sending and receiving a message easier.

Services Provided by a User Agent

A user agent is a software package (program) that composes reads, replies to, and forwards messages. It also handles mailboxes.

Composing Messages A user agent helps the user compose the e-mail message to be sent out.Most user agents provide a template on the screen to be filled in by the user. Some even have a built-in editor that can do spell checking, grammar checking, and other tasks expected from a sophisticated word processor. A user, of course, could alternatively use his or her favourite text editor or word processor to create the message and import it, or cut and paste it, into the user agent template.

Reading Messages The second duty of the user agent is to read the incoming messages. When auser invokes a user agent, it first checks the mail in the incoming mailbox. Most user agents show a one-line summary of each received mail. Each e-mail contains the following fields.

2. A flag field that shows the status of the mail such as new, already read but not replied to, or read and replied to.

3. The size of the message.

There are two types of user agents: command-driven and GUI-based.

GUI-Based Modem user agents are GUI-based. They contain graphical-user interface (GUI)components that allow the user to interact with the software by using both the keyboard and the mouse. They have graphical components such as icons, menu bars, and windows that make the services easy to access. Some examples of GUI-based user agents are Eudora, Microsoft's Outlook, and Netscape.

Some examples of GUIÂ·based user agents are Eudora, Outlook, and Netscape.

The actual mail transfer is done through message transfer agents. To send mail, a system must have the client MTA, and to receive mail, a system must have a server MTA. The formal protocol that defines the MTA client and server in the Internet is called the Simple Mail Transfer Protocol (SMTP). As we said before, two pairs of MTA client/server programs are used in the most common situation (fourth scenario).

SMTP simply defines how commands and responses must be sent back and forth. Each network is free to choose a software package for implementation.

SMTP uses commands and responses to transfer messages between an MTA client and an MTA server. Each command or reply is terminated by a two-character (carriage return and line feed) end-of-line token.

Commands: Commands are sent from the client to the server. It consists of a keyword followedby zero or more arguments. SMTP defines 14 commands. The first five are mandatory; every implementation must support these five commands. The next three are often used and highly recommended. The last six are seldom used.

Responses: Responses are sent from the server to the client. A response is a three digit code thatmay be followed by additional textual information.

Post Office Protocol, version 3 (POP3) is simple and limited in functionality. The client POP3 software is installed on the recipient computer; the server POP3 software is installed on the mail server. Mail access starts with the client when the user needs to download e-mail from the mailbox on the mail server. POP3 has two modes: the delete mode and the keep mode. In the delete mode, the mail is deleted from the mailbox after each retrieval. In the keep mode, the mail remains in the mailbox after retrieval. The delete mode is normally used when the user is working at her permanent computer and can save and organize the received mail after reading or replying. The keep mode is normally used when the user accesses her mail away from her primary computer (e.g., a laptop). The mail is read but kept in the system for later retrieval and organizing.

Another mail access protocol is Internet Mail Access Protocol, version 4 (IMAP4). IMAP4 is similar to POP3, but it has more features; IMAP4 is more powerful and more complex