If there were no copper losses in the rotor, the output would equal rotor input and the rotor would run at synchronous speed Ns.

If Tg newton metre is the gross torque developed and N r.p.m is the speed of the rotor, then

If there were no copper losses in the rotor, the output would equal rotor input and the rotor would run at synchronous speed Ns. 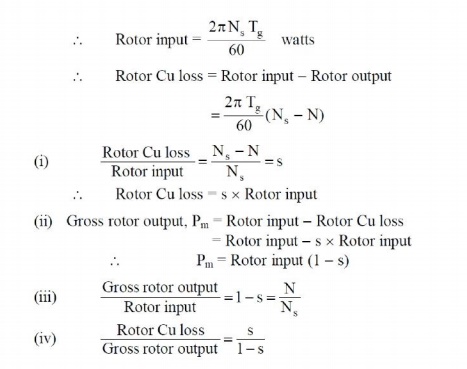 It is clear that if the input power to rotor is "Pr" then "s.Pr" is lost as rotor Cu loss and the remaining (1 - s) Pr is converted into mechanical power. Consequently, induction motor operating at high slip has poor efficiency.

The gross torque Tg developed by an induction motor is given by; 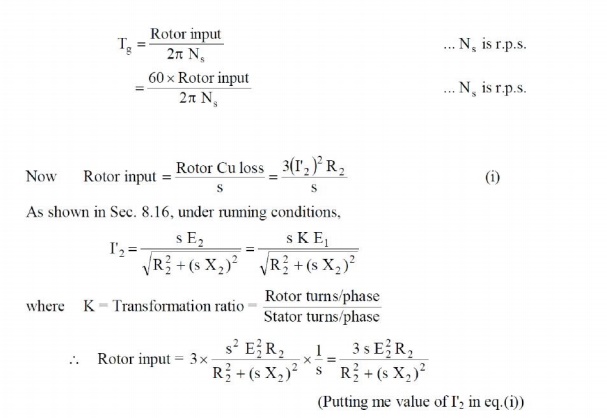 The torque T developed by the rotor is directly proportional to:

I2 = rotor current at standstill

Note. The values o rotor e.m.., rotor current and rotor power factor are taken or the given conditions. 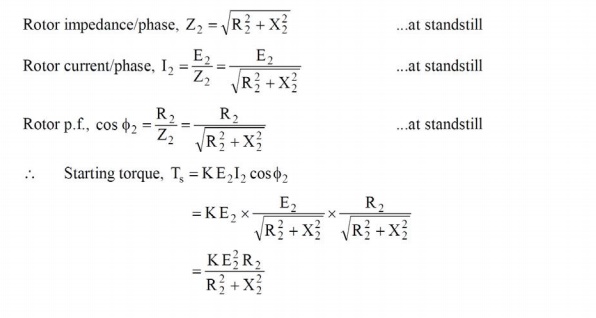 Generally, the stator supply voltage V is constant so that flux per pole  set up by the stator is also fixed. This in turn means that e.m.f. E2 induced in the rotor will be constant.

Where K1 is another constant.

It is clear that magnitude of starting torque would depend upon the relative values of R2 and X2 i.e., rotor resistance/phase and standstill rotor reactance/phase.

Note that here Ns is in r.p.s.

It can be proved that starting torque will be maximum when rotor resistance/phase is equal to standstill rotor reactance/phase.

Hence starting torque will be maximum when:

Under the condition of maximum starting torque,  ϕ2 = 45° and rotor power factor is 0.707 lagging.

5. Effect of Change of Supply Voltage 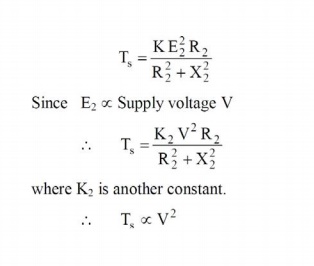