Every living organism responds to its environment. There are various ways by which organisms respond to abiotic conditions.

Every living organism responds to its environment. There are various ways by which organisms respond to abiotic conditions. Some organisms can maintain constant physiological and morphological conditions or undertake steps to overcome the environmental condition, which in itself is a response (Fig. 11.12). 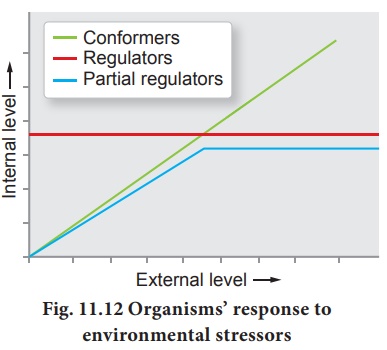 The types of responses observed are

• Regulate: Some organisms are able to maintain homeostasis by physiological means which ensures constant body temperature, ionic / osmotic balance. Birds, mammals and a few lower vertebrate and invertebrate species are capable of such regulation.

• Conform: Most animals cannot maintain a constant internal environment. Their body temperature changes with the ambient temperature. In aquatic animals like fishes, the osmotic concentration of the body fluids changes with that of the ambient water osmotic concentration. Such animals are called Conformers. In case of extreme condition, the inhabitants relocate themselves as in migration.

• Migrate: Organisms tend to move away temporarily from a stressful habitat to a new, hospitable area and return when the stressful period is over. Birds migrate from Siberia to Vedanthangal in Tamilnadu to escape from the severe winter periods.

• Suspend: In certain conditions, if the organisms is unable to migrate, it may avoid the stress by becoming inactive. This is seen commonly in bears going into hibernation during winter. Some snails and fish go into aestivation to avoid summer related problems like heat and desiccation. Some lower animals suspend a certain phase of their life cycle, which is referred to as diapause.