The density of a population refers to its size in relation to unit of space and time. 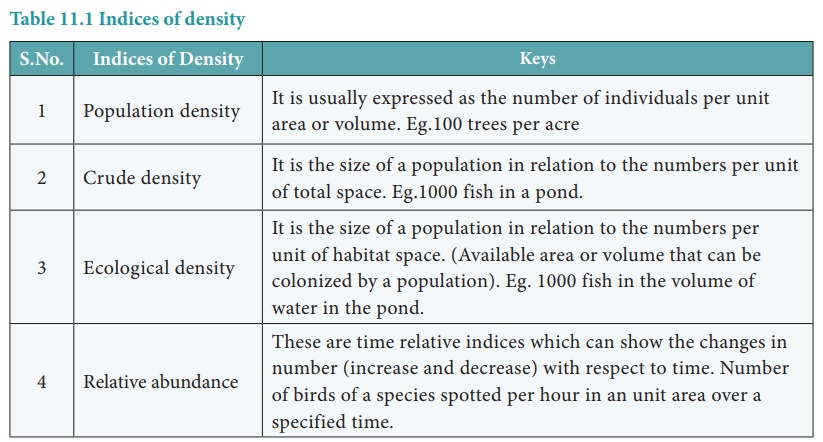 Populations increase because of natality. Natality is equivalent to birth rate and is an expression of the production of new individuals in the population by birth, hatching, germination (or) fission. The two main aspects of reproduction, namely fertility and fecundity play a significant role in a population. Natality rate may be expressed in crude birth rate number of organisms born per female per unit time.

Mortality is the population decline factor and is opposite to natality. Mortality can be expressed as a loss of individuals in unit time or death rate. Generally, mortality is expressed as specific mortality, that is, the number of members of an original population dying after the lapse of a given time. The crude death rate of a population can be calculated by the equation.

The rate of mortality (death) is determined by density. Mortality is high at high density because of the hazards of overcrowding, increased predation and spread of disease.

Mortality rates vary among species and are correlated and influenced by a number of factors such as destruction of nests, eggs or young by storms, wind, floods, predators, accidents and desertion by parents.

Populations have a tendency to disperse or spread out in all directions, until some barriers are reached. This is observed by the migration of individuals into (Immigration) or out (Emigration) of the population area.

Migration is a peculiar and unique kind of mass population movement from one place to another and back. To avoid the severe winter cold, Siberian cranes migrate from Siberia to Vedanthangal in Tamil Nadu and return back in spring. Some fishes are known to migrate from sea to fresh water (anadromous migration, Salmon) and some from fresh water to sea (catadromous migration, Eel).

Under natural conditions, emigration usually occurs when there is overcrowding. This is regarded as an adaptive behavior that regulates the population in a particular site and prevents over exploitation of the habitat. Further, it leads to occupation of new areas elsewhere.

It leads to a rise in population levels. If the population increases beyond the carrying capacity, it can result in increased mortality among the immigrants or decreased reproductive capacity of the individuals. Both emigration and immigration are initiated or triggered by weather and other abiotic and biotic factors.