A habitat can be considered as the ‘address’ of the organism.

A habitat can be considered as the ‘address’ of the organism. The collection of all the habitat areas of a species constitutes its geographical range. Organisms in a habitat interact with each other and can be part of trophic levels to form food chains and food webs.

Examples: In a xerophytic habitat, the camel is able to use water efficiently and effectively for evaporative cooling through their skin and respiratory system. They excrete highly concentrated urine and can also withstand dehydration upto 25% of the body weight. The hoofs and hump are also suitable adapta'tions for survival in this dry sandy environment.

In an aquatic media, maintaining homeosasis and osmotic balance is a challenge. So, marine animals have appropriate adaptations to prevent cell shrinkage. While freshwater organisms have suitable adaptations to withstand bursting of their cells. Apart from this, organisms such as fish have a wide range of adaptations like fins (locomotion), streamlined body (aerodynamic), lateral line system (sensory), gills (respiration), air sacs (floatation) and kidneys (excretion).

Charles Elton (1927) was the first to use the term ‘niche’ as the functional status of an organism in its community. Groups of species with comparable role and niche dimensions within a community are termed ‘guilds’. Species that occupy the same niche in different geographical regions, are termed ‘ecological equivalents’.

Many animals share the same general habitat. But their niches are well defined. The life style of an individual population in the habitat is known as its niche. For example, crickets and grasshoppers are closely related insects that live in the same habitat, yet they occupy different ecological niches. The grasshopper is very active during daylight. It can usually be found on a plant, feeding on the plant parts. Although the cricket lives in the same field, it is quite different. During the day, the cricket hides under leaves or plant debris and is usually inactive. It is active at night time (nocturnal). The cricket and the grasshopper do not interfere with each other’s activities in the same habitat. Thus, niche of an organism can be defined as the total position and function of an individual in its environment.

In a pond ecosystem, where Catla, Rohu and Mrigal are present, the ecological niche of the Catla is a surface feeder, Rohu is a column feeder and Mrigal is a bottom feeder. Their mouths are designed to suit their niche and hence have different positions and functions in their habitat. (Fig.11.1) 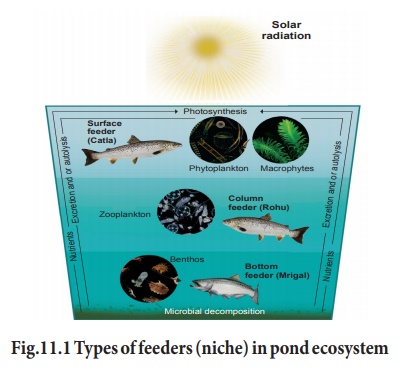