Organisms belonging to different populations interact for food, shelter, mating or for other necessities.

Organisms belonging to different populations interact for food, shelter, mating or for other necessities. Interaction may be intra specific (interaction within the members of same species) or inter specific (among organisms of different species).

Intra specific association is observed for all livelihood processes like feeding, territoriality, breeding and protection.

Interspecific associations or interactions can be:

Neutral: where different species live together but do not affect each other.

Positive: it is a symbiotic relationship in which no organism in association is harmed and either one or both may be benefitted. It is of two types – Mutualism and Commensalism.

Negative: One or both of the interacting organisms will be affected as in case of competition, predation, parasitism.

The common types of interspecific inter actions are:

AMENSALISM (--, 0): This is the ecological interaction in which an individiual species harm another without obtaining benefit, large powerful animals harm weak animals. eg., animals destroyed at the feet of elephants

MUTUALISM (+, +): It is the type of interaction where both species benefit from the interaction. Mutualism may be facultative when the species involved are capable of existence independent of one another, or obligate, when the relationship is imperative of the existence of one or both species. Examples:

• Certain bacteria in the caeca and intestine of herbivores aid in the digestion of cellulose. In return the host provides suitable environment for the growth of the bacteria.

• The cross pollination of flowers by insects and birds seeking nectar and pollen which is of great importance in agriculture.

• The hermit crab carries along on its shell a Sea anemone (a sedentary coelenterate). The crab is protected from its enemies by the stinging cells of the anemone while the anemone gets its food (Fig. 11.15).

COMMENSALISM (+, 0): This defines the interaction in which two or more species are mutually associated in activities centering on food and one species at least, derives benefit from the association while the other associates are neither benefited nor harmed. The concept of commensalism has been broadened in recent years, to apply to coactions other than those centering on food such as cover, support, production, and locomotion. Examples:

• Barnacles attached to Whales travel thousands of miles collecting and filtering food from the moving water. The whales are not affected by the barnacles.

• Egrets usually are present near cattle. They catch insects which are disturbed by the cattle. The bird benefits, while the cattles are not affected (Fig. 11.16).

COMPETITION (--, --): It refers to the type of interaction in which individuals of a species or members of different species vie for limited availability of food, water, nesting space, cover, mates or other resources. When resources are in more than adequate to meet the demands of the organisms seeking them, competition does not occur, but when inadequate to satisfy the need of the organisms seeking them, the weakest, least adapted, or least aggressive individuals are often forced to face challenges. This phenomenon is known as the competitive exclusion principle of Hardin.

DEGREE OF COMPETITION - Competition is usually keen between individuals of the same species (intraspecific competition) because they have identical requirements for food, mates, and so on. Interspecific competition occurs where different species require at least some resource materials or conditions in common. The severity of competition depends on the extent of similarity or overlap in the requirements of different individuals and the shortage of the supply in the habitat as birds compete with squirrels for nuts, and seeds; insects and ungulates compete for food in grasslands (Fig. 11.17). 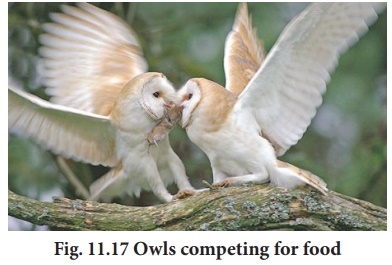 PARASITISM (+, --): It is a kind of harmful interaction between two species, wherein one species is the ‘parasite’ and the other its ‘host’. The parasite benefits at the expense of the host. A parasite derives shelter, food and protection from the host. Parasites exhibit adaptations to exploit their hosts. The parasites may be viral parasites (plant animal viruses), microbial parasites (e.g., bacteria / protozoa / fungi), phytoparasites (plant parasites) and zooparasites (animal parasites such as Platyhelminthes, nematodes, arthropods). Parasites may inhabit or attach to the surface of the host (Ectoparasites - Head lice, Leech) or live within the body of the host (endoparasites – ascaris, tapeworm). The endoparasites usually live in the alimentary tract, body cavities, various organs or blood or other tissues of the host.

PREDATION (+, --): It is a form of interaction, where one animal kills another animal for food. Like parasitism, predation is important in community dynamics, but both differ in the point that a predator tends to be larger than its prey, and it catches its prey from without, while a parasite is smaller than its host and consumes it from within.

By their hunting activities predators can be regarded as specialized or generalized.

Specialized predators are those adapted to hunt only a few specific species. Lion and deer exhibit predator – prey relationship, where the Lion is the predator and the deer is the prey. This type of interaction helps in the transfer of energy up the trophic levels and is an essential strategy in population regulation (Fig. 11.18). 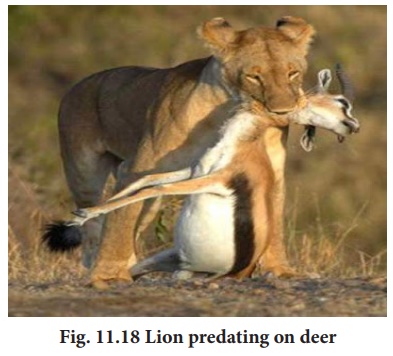