Concept of biome and their distribution

Biomes are large regions of earth that have similar or common vegetation and climatic conditions.

Concept of biome and their distribution

Biomes are large regions of earth that have similar or common vegetation and climatic conditions. They play a crucial role in sustaining life on Earth. They are defined by their soil, climate, flora and fauna. Biomes have distinct biological communities that have been formed in response to a shared physio-chemical climate. Biomes are seen to even spread across continents. Thus, it can be observed that a biome is a broader term than habitat. Any biome can comprise a variety of habitats. Factors such as temperature, light, water availability determine what type of organisms and adaptations are observed in a biome (Fig. 11.4). 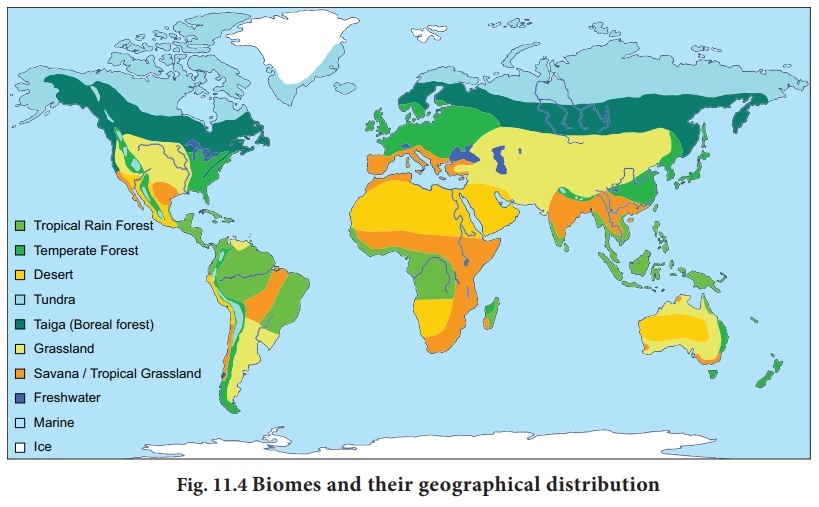 Characters of a biome

• Boundaries between biomes are not always sharply defined. Transition or transient zones are seen as in case of grassland and forest biomes. (Fig. 11.5) 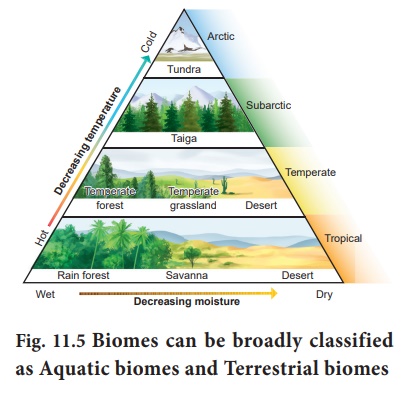 Aquatic Biomes: They occupy about 71% of the biosphere. The aquatic biome is home to millions of aquatic organisms like fishes. The climate of coastal zones are influenced by aquatic bodies. (Fig. 11.6). 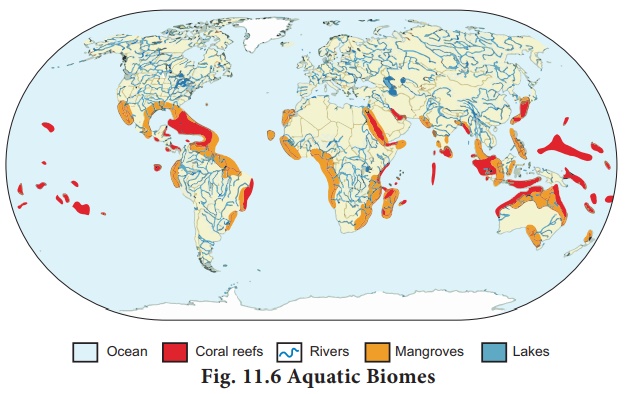 These are large communities of plants and animals that occupy a distinct region. They

include grassland, tundra, desert, tropical rainforest, and deciduous and coniferous forests. Terrestrial biomes are distinguished primarily by their predominant vegetation, and are mainly determined by climate, which in turn, determines the organisms inhabiting them. These include the keystone species and indicator species which are unique to their respective biomes. The terrestrial biomes are a source of food, O2 and act as CO2 sink, apart from the climate regulatory role. (Fig. 11.7). 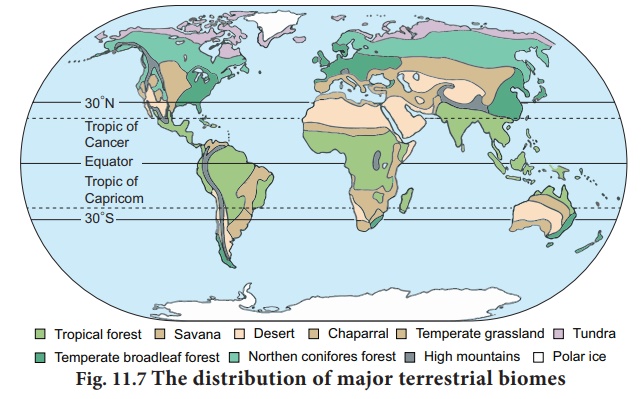 Major Biomes of the Earth

• This is the almost treeless plain in the northern parts of Asia, Europe and North America.

•• Winters are long with little daylight, Summers are short, with long daylight hours.

• Precipitation is less than 250 mm per year.It is a zone of permafrost.

• Because of the severe winters, many of the animals are migratory.  For example, the many shore birds and waterfowl  such as ducks and geese, nest in the Tundra during the summer and migrate south for the winter.

•Short season of growth and reproduction

•Energy and nutrients in the form of dead organic material

• This area has long and cold winters.

• The Taiga is a forest of coniferous trees such as spruce, fir and pine. This is a major source for the logging industry.

• Important  migratory  herbivores  include moose, elk, deer and reindeer. Moose and reindeer migrate to the Taiga for winter and to the Tundra for summers. The common smaller mammals are herbivorous squirrels, snowshoe hare and predatory pine martens. Important predators include the timber wolf, grizzly bear, black bear, bobcat and wolverines. (Fig. 11.8). 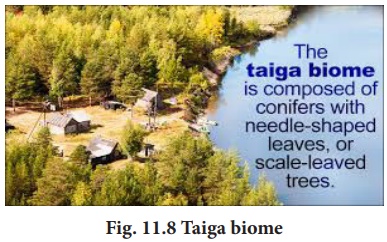 • Grasslands occur in temperate and in the tropical regions.

• They have hot summers, cold winters, and irregular rainfall.

• Often they are characterized by high winds.

• The low irregular rainfall is the factor which makes the difference between a temperate deciduous forest and a temperate grassland. 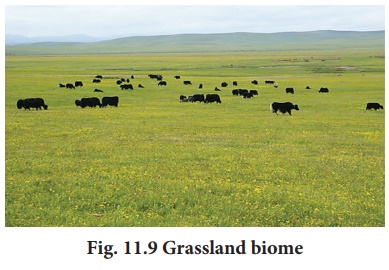 • The alpine zone (zone between timber line and snow zone) includes in the descending order, a sub-snow zone immediately below the snow zone, a meadow zone in the centre and a shrub zone which gradually merges into the timber zone.

• The snow zone of Himalayas lies over 5100m above mean sea level and alpine zone exists at a height of 3600m. From an ecological view point, the zone above the limits of tree growth (timber line) exhibits extreme environmental conditions which greatly influence the biota of this region.

• Alpine zone of Himalayas is characterized by sparseness of animal groups. Many invertebrates of alpine zone are predatory and occur in lakes, streams and ponds. Among fishes, amphibians and vertebrates are totally lacking and reptilian fauna is greatly impoverished.

Forest is a broad term used to describe areas where there are a large number of trees (Fig. 11.10). The forest biomes include a complex assemblage of different kinds of biotic communities. The major forest biomes are the Tropical forests and the Temperate forests. 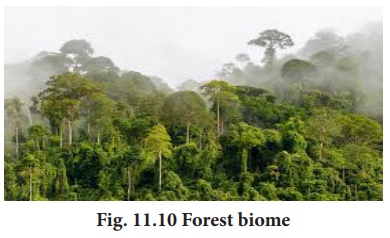 • The major characteristic of tropical forests is their distinct seasons. Only two seasons are present (rainy and dry). Winter is absent. The length of daylight is about 12 hours and varies little.

• The average annual temperature ranges between 20° C and 25° C.

• Precipitation is evenly distributed throughout the year with annual rainfall exceeding 2000 mm.

• Soil is nutrient-poor and acidic. Decomposition is rapid and soils are subject to heavy leaching.

• They are characterized by the greatest diversity of fauna which includes birds, bats, small mammals, and insects.

Based on the seasonal distribution of rainfall, the types of tropical forests are

• Moist/dry deciduous forest (monsoon): the length of the dry season increases further as rainfall decreases (all trees are deciduous).

More than half of earth’s tropical forests have already been destroyed.

• Have well-defined seasons with a distinct winter. Moderate climate and a growing season of 140-200 days during 4- 6 frost-free months distinguish temperate forests.

• Canopy is moderately dense and allows light to penetrate, resulting in well-developed and richly diversified understorey vegetation and stratification of animals.

• Flora is characterized by 3 -4 tree species per km2. Trees have broad leaves that are lost annually such as oak, hickory, beech, hemlock, maple, basswood, cottonwood, elm, willow, and spring-flowering herbs.

Based on seasonal distribution of rainfall, the types of temperate forests are

• Deserts cover about one fifth of the earth's surface and occur where rainfall is >500 mm/year.

• Soils are course-textured, shallow, rocky or gravely with good drainage and have no subsurface water. The finer dust and sand particles are blown elsewhere, leaving heavier pieces behind. Sand dunes are common.

• Mean annual temperatures range from 20-25° C. The extreme maximum ranges from 43.5 - 49° C. Minimum temperatures sometimes drop to -18° C. Based on the temperature range, deserts can be Hot deserts and Cold deserts.

• Hot deserts such as the Sahara of North Africa and the deserts of the southwestern U.S., Mexico, Australia and India (Thar desert) occur at low latitudes.

• Soils often have abundant nutrients because they need only water to become very productive and have little or no organic matter.

• Only animals which can tap available water or capable of storing sufficient water and withstand the heat can survive in the desert. The animals include small nocturnal (active at night) carnivores. The dominant animals are burrowers and have cursorial, fossorial and saltatorial adaptations.

• The animals stay inactive in protected hideaways during the hot day and come out to forage at dusk, dawn or at night, when the desert is cooler.

• The dominant animals of warm deserts are reptiles and small mammals. The Indian Spiny-tailed lizard, the blackbuck, the white-footed fox are the common fauna of the Thar deserts. There are also insects, arachnids and birds (Fig. 11.11). 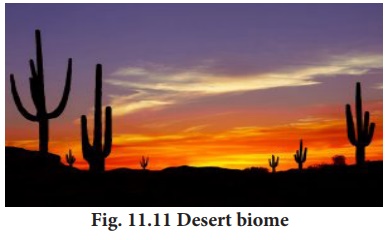 • Cold deserts are characterized by cold winters with snowfall and high overall rainfall throughout the winter and occasionally over the summer.

• They occur in the Antarctic, Greenland and the Nearctic realm, parts of USA and in parts of western Asia and the Ladakh region in India.

• Winters receive quite a bit of snow. The mean annual precipitation ranges from 150-250 mm.

• The soil is heavy, silty and salty.