The abiotic factors include the chemical and physical factors which influence or affect organisms and their functioning in their environment.

The abiotic factors include the chemical and physical factors which influence or affect organisms and their functioning in their environment. The common abiotic factors are:

Temperature or degree of hotness and coldness is an essential and variable factor in any environment. It influences all forms of life by affecting many vital activities of organisms like metabolism, behaviour, reproduction, development and even death in the Biosphere. The minimum and maximum temperature of an environment regulates the survival of a cell.

The metabolism of organisms is regulated by enzymes which are temperature sensitive. In many organisms, determination of sex and sex ratio, maturation of gonads, gametogenesis and reproduction is influenced by temperature. In certain environments, the size and colouration of animals are influenced by temperature. Birds and mammals attain greater body size in colder regions than warmer regions (Bergmann’s rule). Warm blooded animals, living in colder climates, tend to have shorter limbs, ears and other appendages when compared to the members of the same species in warmer climates (Allen’s rule). In some aquatic environments, an inverse relationship between water temperature and fish meristic characters is observed - lower the temperature, more the vertebrae (Jordon’s rule). 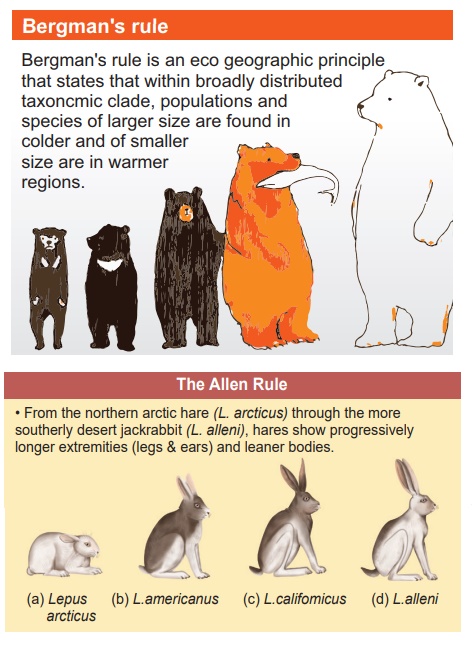 Temperature influences the distribution of organisms. The tropics have higher diversity and density of populations, when compared to temperate and polar regions.

Adaptation to temperature is essential for the survival of the species/organisms. Organisms which can survive a wide range of temperature are referred to as Eurytherms (cat, dog, tiger, human). Eurythermy can be an evolutionary advantage: adaptations to cold temperatures (cold-eurythemy) are seen as essential for the survival of species during ice ages. In addition, the ability to survive in a wide range of temperatures increases a species' ability to inhabit other areas, an advantage for natural selection. Eurythermy is an aspect of thermoregulation in organisms.

Those organisms which can tolerate only a narrow range of temperature are Stenotherms (Fish, Frogs, Lizards and Snakes).

Over the course of time, by evolution, animals of different ecological habitats have developed different variations and adaptations to temperature changes. It enabled them to survive in different habitats and develop niches. In case of extreme temperatures, organisms have adapted by forming heat resistant spores, cysts (Entamoeba), antifreeze proteins (Arctic fishes). Hibernation (winter sleep) and Aestivation (Summer sleep) are useful adaptations to overcome extreme winters and summers. In certain conditions, migration is an appropriate adaptation to overcome extreme temperatures and resultant water and food scarcity. (Fig 11.2). 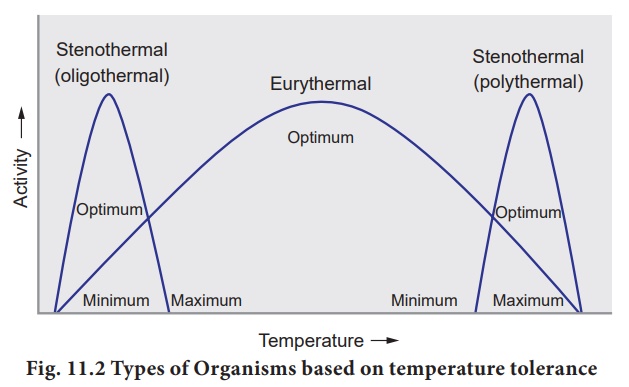 It is an important and essential abiotic factor. Ecologically, the quality (wavelength or colour), the intensity (actual energy in gram calories) and duration (length of day) of light are considered significant for organisms.

Light  influences  growth,  pigmentation,migration and reproduction. The intensity and frequency of light influences metabolic activity, induce gene mutations (UV, X- rays). Light is essential for vision. This is proved by the poorly developed or absence of eyes in cave dwelling organisms. Diapause is also influenced by light in animals. Gonads of birds become more active with increasing light in summer. Light influences the locomotion and movement of lower animals.

Phototaxis: The movement of organism in response to light, either towards the source of light as in Moths (positive phototaxis) or away from light (Euglena, Volvox, earthworm (negative phototaxis).

Life on earth began in the seas and water is essential for the survival of all forms of life. About three-fourth of the earth’s surface is covered with water (hydrosphere). Water is found in three states: gaseous, liquid, and solid.

There are two types of water on Earth. They are the Fresh water (rivers, lakes, ponds) and the Salt water (seas and oceans). Based on the dissolved salts, water can be hard water (sulphates/nitrates of Calcium/Magnesium) or soft water. If hardness can be removed by boiling, it is temporary hard water, and if boiling does not help, it is permanent hard water.

• Water is one of the main agents in Pedogenesis (soil formation).

• It is the medium for several different ecosystems.

• It is present as moisture in the atmosphere and the outer layers of the lithosphere and is uneven in distribution on the earth.

• Water is heavier than air and imparts greater buoyancy to the aquatic medium. This enables organism to float at variable levels.

• Water has high heat capacity and latent heat, due to which it can withhold large amounts of heat. Thus, oceans and lakes tend to maintain a relatively constant temperature, and the biosphere is relatively thermostable.

• Water is physically unique because it is less dense as a solid (ice) than as a liquid.

• When water freezes (0⁰C), it contracts. The maximum density of liquid water occurs at 4ºC. Below that, it expands markedly. This enables ice to float on the top of water bodies. Hence, only the surface of water bodies will freeze, while below the surface, water will be in liquid form, sustaining life (Fig. 11.3). 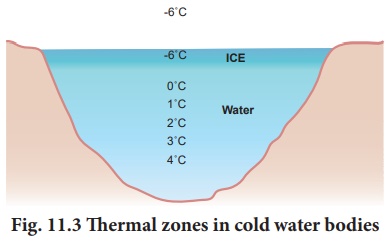 • Water is considered as the Universal solvent. It is the main medium by which chemical constituents are transported from abiotic components to the living components of an ecosystem.

• Water has high surface tension. This allows pollen, dust, and even water striders to remain at the surface of a water body even though they are denser than the water.

It is a mixture of organic matter, minerals, gases, liquids and organisms that together support life. The soil zone is known as Pedosphere. Soil is formed from rocks which are the parent materials of soil, by weathering and is called embryonic soil (Pedogenesis).

It has four major functions-

• means for water storage and purification

• habitat for many organisms, which in turn modify the soil

Soil is formed of many horizontal layers called as Soil Profile.

1. Texture of soil – The texture of soil is determined by the size of the soil particles. The types of soil include sand, silt and clay on the basis of their size differences.

2. Porosity – The space present between soil particles in a given volume of soil are called pore spaces. The percentage of soil volume occupied by pore space or by the interstitial spaces is called porosity of the soil.

4. Soil Temperature-Soil gets its heat energy from solar radiation, decomposing organic matter, and heat from the interior of earth. Soil temperature effects the germination of seeds, growth of roots and biological activity of soil-inhabiting micro-and macro-organisms.

5. Soil water- In soil, water is not only important as a solvent and transporting agent, but also maintains soil texture, arrangement and compactness of soil particles, making soil habitable for plants and animals.

Wind is the natural movement of air of any velocity from a particular direction. The two main causes are differential heating between the equator and the poles and the rotation of the planet (Coriolis effect). Wind helps to transport pollen grains, seeds, and even flight of birds. While it is the source of wind energy, it also causes erosion. Wind speed is measured with an Anemometer.

Moisture in the form of invisible vapor in the atmosphere is called humidity. which is generally expressed in terms of absolute humidity, relative humidity or specific humidity. Absolute humidity is the total mass of water vapour present in a given volume or mass of air. It does not take temperature into consideration.

This factor is mainly the elevation or gradient and it affects temperature and precipitation in an ecosystem or biome. As altitude increases, temperature and density of oxygen decreases. Higher altitudes usually receive snow instead of rain because of low temperature.

Animals are known to modify their response to environmental changes (stress) in reasonably short time spans. This is known as Acclimatization. This is observed when people who have moved from the plains to higher altitudes show enhanced RBC count within a few days of settling in their new habitat. This helps them cope with lower atmospheric oxygen and higher oxygen demand.