RSV primarily infects the bronchi, bronchioles, and alveoli of the lung.

RSV primarily infects the bronchi, bronchioles, and alveoli of the lung.

The illnesses  clinically categorized as croup, bronchitis, bronchiolitis or pneumonia are extremely common in infants. The acute phase of cough, wheezing and respiratory distress lasts 1 to 3 weeks. The severity of respiratory involvement and the high prevalence during outbreaks both account for a large number of hospitalizations on pediatric units each year. Elderly or immunocompromised patients are also frequently susceptible and can be severely affected.

Community outbreaks of RSV infection occur annually commencing at any time fromlate fall to early spring. The usual outbreak lasts 8 to 12 weeks and can involve nearly one half of all families with children. In the family setting, it appears that older siblings often introduce the virus into the home, and secondary infection rates can be almost 50%. The usual duration of virus shedding is 5 to 7 days; young infants, however, may shed virus for 9 to 20 days or longer.

Spread of RSV in the hospital setting is also a major problem. Control is difficult, but includes careful attention to handwashing between contacts with patients, isolation, and exclusion of personnel and visitors who have any form of respiratory illness. Masks are not effective in controlling nosocomial spread.

RSV is spread to the upper respiratory tract by contact with infective secretions. Infection appears to be confined primarily to the respiratory epithelium, with progressive involve-ment of the middle and lower airways. Viremia occurs rarely. The direct effect of virus on respiratory tract epithelial cells is similar to that previously described for influenza viruses, and cytotoxic T cells appear to play a similar role in early control of the acute infection.

The apparent enhanced severity of disease, particularly in very young infants, is not yet clearly understood but may have an immunologic basis. Factors that have been pro-posed to play a role include (1) qualitative or quantitative deficits in humoral or secretory antibody responses to critical virus-specified proteins, (2) formation of antigen–antibody complexes within the respiratory tract resulting in complement activation, or (3) exces-sive damage from inflammatory cytokines. Experimental evidence suggests that patients who respond to RSV infections with CD4+ cells that are predominantly of the TH type 2 have more severe disease than those with predominant THtype 1 responses. This is thought to be due to the inflammatory cytokines produced by TH type 2 cells, including interleukin (IL)-4, IL-5, IL-6, IL-10, and IL-13.

The major pathologic findings are in the bronchi, bronchioles, and alveoli. These in-clude necrosis of epithelial cells; interstitial mononuclear cell inflammatory infiltrates, which sometimes also involve the alveoli and alveolar ducts; and plugging of smaller air-ways with material containing mucus, necrotic cells, and fibrin (Fig 33–2). Multinucle-ated syncytial cells with intracytoplasmic inclusions are occasionally seen in the affected tracheobronchial epithelium. 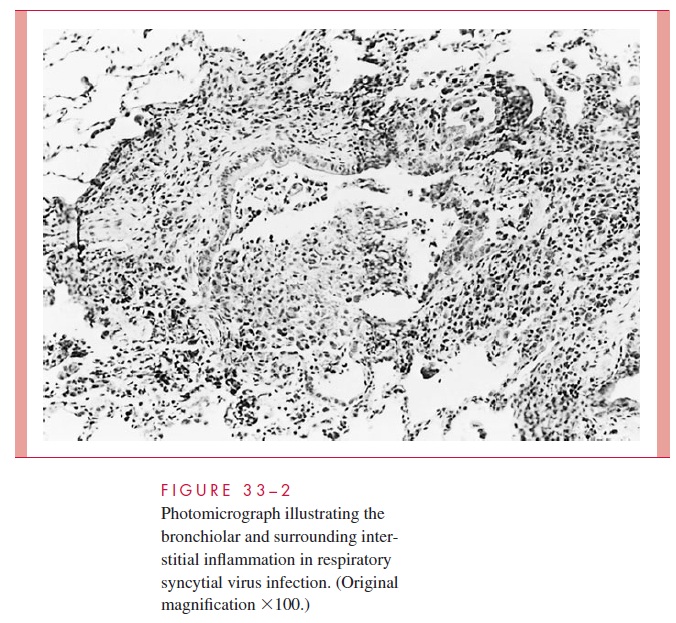 Infection results in IgG and IgA humoral and secretory antibody responses. However, immunity to reinfection is quite tenuous, as demonstrated by patients who have recovered from a primary acute episode and have become reinfected with disease of similar severity in the same or succeeding year. Illness severity appears to diminish with increasing age and successive reinfection.