Type 1 and 2 adenoviruses are highly endemic; type 5 is the next most common.

Type 1 and 2 adenoviruses are highly endemic; type 5 is the next most common. Most primary infections with these viruses occur early in life and are spread by the respiratory or fecal–oral route. Overall, only about 45% of adenovirus infections result in disease. Their most significant contribution to acute illness is in children, particularly those under 2 years of age (approximately 10% of acute febrile illness). Adenoviruses are also major causes of acute respiratory disease in military recruits, usually by types 4 and 7.

Infections caused by serotypes 1, 2, and 5 are generally most frequent during the first few years of life. All serotypes can occur during any season of the year but are encoun-tered most frequently during late winter or early spring. Sharp outbreaks of disease caused by serotypes 3 and 7 have been traced to inadequately chlorinated swimming pools. Conjunctivitis is the illness most commonly associated with these episodes. Other outbreaks of conjunctivitis have been traced to physicians’ offices and appear to have been spread by contaminated ophthalmic medications or diagnostic equipment.

The adenoviruses usually enter the host by inhalation of droplet nuclei or by the oral route. Direct inoculation onto nasal or conjunctival mucosa by hands, contaminated towels, or ophthalmic medications may also occur. The virus replicates in epithelial cells, producing cell necrosis and inflammation. Viremia sometimes occurs and can result in spread to dis-tant sites, such as the kidney, bladder, liver, lymphoid tissue (including mesenteric nodes), and, occasionally, the CNS. In the acute phase of infection, the distant sites may also show inflammation; for example, abdominal pain is occasionally seen with severe illnesses and is believed to result from mesenteric lymphadenitis caused by the viruses.

After the acute phase of illness, the viruses may remain in tissues, particularly lym-phoid structures such as tonsils, adenoids, and intestinal Peyer’s patches, and become reactivated and shed without producing illness for 6 to 18 months thereafter. This reacti-vation is enhanced by stressful events (stress reactivation), such as infection by other agents. Integration of adenoviral DNA into the host cell genome has been shown to occur; this latent state can persist for years in tonsillar tissue and peripheral blood lymphocytes.

Like the viruses described previously, adenoviruses have a primary pathology involv-ing epithelial cell necrosis with a predominantly mononuclear inflammatory response. In some instances, smudgy intranuclear inclusions may be seen in infected cells (Fig 33–4). A potentially important pathogenic feature of the virion is the presence of pentons, which are located at each of the 12 corners of the icosahedron. These fiber-like projections with knob-like terminal structures are believed to bind to a cellular receptor that is similar or identical to the one for group B coxsackieviruses. The pentons also appear to be responsi-ble for a toxic effect on cells, which manifests as clumping and detachment in vitro. 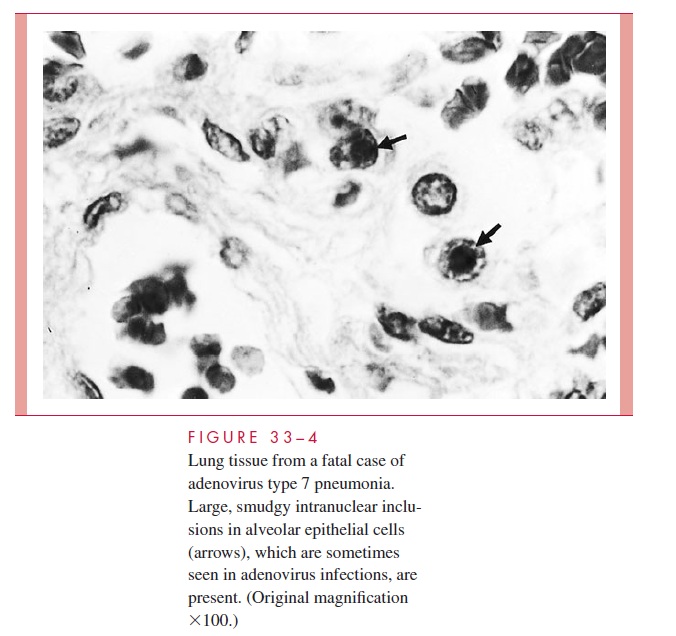 In addition, adenoviruses have developed other novel strategies to survive in the host yet produce deleterious effects. These include encoding a protein in its early E3 genomic region that binds class I MHC antigens in the endoplasmic reticulum, thus restricting their expression on the surface of infected cells and interfering with recognition and attack by cytotoxic T cells. This ability to evade immunosurveillance may be vital to establishment of latency. Another early protein (E1A) has been associated with increased susceptibility of epithelial cells to destruction by tumor necrosis factor and other cytokines.

Other aden-oviral proteins have been described that have a variety of effects on cell function and susceptibility to cytolysis. One of these, called the adenovirus death protein, is considered important for efficient lysis of infected cells and release of newly formed virions.

Immunity after infection is serotype specific and usually long lasting. In addition to type- specific immunity, group-specific complement-fixing antibodies appear in response to infection. These antibodies are useful indicators of infection, but do not specify the in- fecting serotype.