Influenza viruses are members of the orthomyxovirus group, which are enveloped, pleo- morphic, single-stranded RNA viruses.

Influenza viruses are members of the orthomyxovirus group, which are enveloped, pleo- morphic, single-stranded RNA viruses. They are classified into three major serotypes, A, B, and C, based on different ribonucleoprotein antigens. Influenza A viruses are the most extensively studied of the three, and much of the following discussion is based on knowledge of this type.

They generally cause more severe disease and more extensive epidemics than the other types; naturally infect a wide variety of species, including mammals and birds; and have a great tendency to undergo significant antigenic changes (Table 33–1). Influenza B viruses are more antigenically stable; are only known to natu-rally infect humans; and usually occur in more localized outbreaks. Influenza C viruses appear to be relatively minor causes of disease, affecting humans and pigs.

Influenza A and B viruses each consist of a nucleocapsid containing eight segments of negative-sense, single-stranded RNA, which is enveloped in a glycolipid membrane de-rived from the host cell plasma membrane. The inner side of the envelope contains a layer of virus-specified protein (M1). Two virus-specified glycoproteins, hemagglutinin and neuraminidase, are embedded in the outer surface of the envelope and appear as “spikes” over the surface of the virion. Figure 33–1 illustrates the makeup of influenza A virus. In-fluenza B is somewhat similar but has a unique NB protein instead of M2. Influenza C differs from the others in that it possesses only seven RNA segments and has no neur-aminidase, although it does possess other receptor-destroying capability . In addition, the hemagglutinin of influenza C binds to a cell receptor different from that for types A and B. 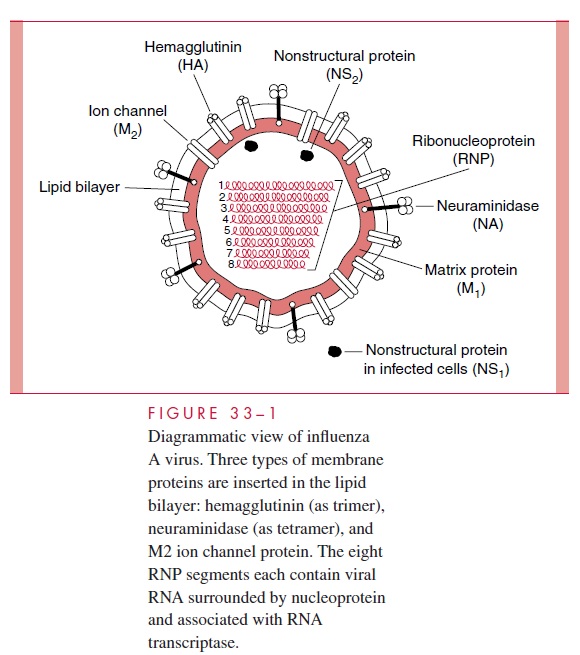 The virus-specified glycoproteins are antigenic and have special functional impor-tance to the virus. Hemagglutinin is so named because of its ability to agglutinate red blood cells from certain species (eg, chickens, guinea pigs) in vitro.

Its major biological function is to serve as a point of attachment to N-acetylneuraminic (sialic) acid– only containing glycoprotein or glycolipid receptor sites on human respiratory cell surfaces, which is a critical first step in initiating infection of the cell.

Neuraminidase is an antigenic hydrolytic enzyme that acts on the hemagglutinin recep-tors by splitting off their terminal neuraminic (sialic) acid. The result is destruction of recep-tor activity. Neuraminidase serves several functions. It may inactivate a free mucoprotein receptor substance in respiratory secretions that could otherwise bind to viral hemagglutinin and prevent access of the virus to the cell surface. It is important in fusion of the viral enve-lope with the host cell membrane as a prerequisite to viral entry. It also aids in the release of newly formed virus particles from infected cells, thus making them available to infect other cells. Type-specific antibodies to neuraminidase appear to inhibit the spread of virus in the infected host and to limit the amount of virus released from host cells.

Influenza A viruses were initially isolated in 1933 by intranasal inoculation of ferrets, which developed febrile respiratory illnesses. The viruses replicate in the amniotic sac of embryonated hen’s eggs, where their presence can be detected by the hemagglutination test. Most strains can also be readily isolated in cell culture systems, such as primary monkey kidney cells. Some cause cytopathic effects in culture.

The most efficient method of detection is demonstration of hemadsorption by adher-ence of erythrocytes to infected cells expressing hemagglutinin or by agglutination of erythrocytes by virus already released into the extracellular fluid. The virus can then be identified specifically by inhibition of these properties by addition of antibody directed specifically at the hemagglutinin. This method is called hemadsorption inhibition or hemagglutination inhibition, depending on whether the test is performed on infectedcells or extracellular virus, respectively. Because the hemagglutinin is antigenic, hemag-glutination inhibition tests can also be used to detect antibodies in infected subjects. Research has shown that antibody directed against specific hemagglutinin is highly effec-tive in neutralizing the infectivity of the virus.