Respiratory system provides a means of acquiring oxygen and eliminating CO2. Various laws are involved in the understanding of respiratory functions.

Respiratory system provides a means of acquiring oxygen and eliminating CO2. Various laws are involved in the understanding of respiratory functions.

Various Gas laws are given below:

1.     BOYLE’S LAW: It states that at constant temperature, the volume of gas varies inversely with the pressure.

2. CHARLE’S LAW: It states that, at constant pressure, the volume of gas isdirectly proportional to the absolute temperature.

3 . HENRY’S LAW : It states that, if the temperature is constant, the quantity of a gas that goes into a solution is directly proportional to the partial pressure of that gas . The gas with the greater partial pressure will have more mass in solution.

4. DALTON’S LAW    : It states that, the total pressure exerted by a mixture of gases is equal to the sum of the partial pressures of various gases.

.External respiration  is the exchange of gases between the lungs and blood stream .

Only a portion of the air entering the respiratory system actually reaches the alveoli . The volume of air that is not available for gas exchange with the blood is known as dead air . The total dead space is less less than 30 percentage of the total volume .

Tidal volume is the depth of breathing or the volume of gas inspired or expired during each respiratory cycle. It is equal to 500 ml for a normal person .

It is the maximal amount of gas that can be inspired from the end- inspiratory position ( Extra inspiration from the high peak tidal volume . It is equal to 3600 ml for a normal person

It is the maximal amount of gas that can be end expiratory level. It is equal to 1200 ml.

It is the amount of gas remaining in the lungs at the end of maximal expiration. It is equal to 1200 ml.

It is the volume of air breathed normally for 1 minute.

It is the amount of gas contained in the lungs at the end of maximal inspiration and it is the sum of inspiratory capacity(IC) and functional residual capacity (FRC). TLC is of 6000 ml for a normal person.

It is the maximum amount of gas that can be expelled from the lungs by forceful effort from maximal inspiration. It is 4800 ml for a normal person.

It is the maximum amount of gas that can be inspired from the resting expiratory level and it is the sum of tidal volume and inspiratory reserve volume. It is equal to 3600 ml for a normal person.

It is the amount of gas remaining in the lungs at the resting expiratory level. FRC = ERV + RV

It relates to the ease with air flows through tubular respiratory structures. In smaller tubes, airway resistance is high.

It is the ability of the alveoli and lung tissue to expand on inspiration.

In this method the transducer is hold by an elastic band which goes around the chest.The respiratory movements results in a corresponding resistance changes of the strain gauge. It is connected as one arm of a wheatstone bridge circuit. Its output varies with chest expansion. This output corresponds to the respiration activity.

Generally there is a temperature difference between inspired and expired air. This temperature is sensed by placing thermistor in front of nostrils. Thermistor is placed by using suitable stand. The thermistor is connected with the bridge circuit. So unbalance signal is amplified to get the respiratory activity.

This is the indirect method of measurement . impedance pneumography is based on the fact that , the a.c impedance across the chest of a patient changes as respiration occurs . 50-50KHz a.c signal is produced by oscillator circuit and is given to the chest of the patient through electrodes.

The signal voltage applied to the amplifier (Differential amplifier) block is the voltage drop across the resistance .

I= Current through the chest (A)

R= change of chest impedance due to respiration (Q)

The output of the amplifier is given to demodulator and filter block. Hence low pass filter is used to remove the residual carrier signal. The output of the impedance pneumograph contains respirating rate data.

Respiration rate can be measured by measuring CO2 in expired air. This CO2 method of measurement is based on the absorption property of infrared rays by certain gases .When infrared rays are passed through the expired air which contains certain amount of CO2, some of radiations are absorbed by it. So, there is loss of heat energy associated with the rays .The detector changes the loss in heating effect of the rays into an electrical signal. It is used to get the average respiration rate. Two infrared sources are available in this set up. The beam from one infrared source falls on the test cuvette side. The beam from another infrared source falls on the reference cuvette side.

Apnoea is the stopping of breathing. It leads to the arrest of the circulation. It can be occurred at the conditions like head injury, drug overdose, etc. It can also occur in premature babies during the first week of life because of their immature nervous system. If apnoea persists for a prolonged period, then brain functions can be severly damaged. So apnoea patients are closely monitored. Apnoea monitor is used to watch the apnoea patients respiration rate. Apnoea monitor gives audio signals and visual signals, when no inspiration occurs for a particular period of time. Input from the sensor is connected with the amplifier circuit having high input impedance. 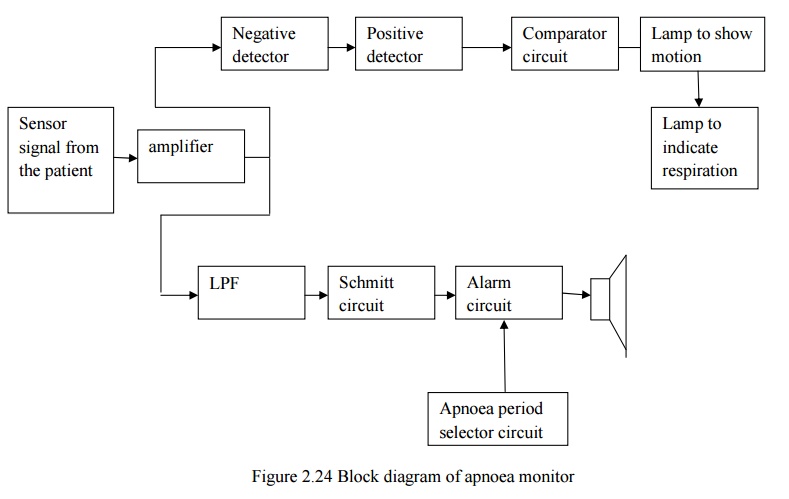 The frequency below the threshold is sensed by negative detector. The output of the motion channel is connected with comparator circuit. It compares the amplitude of motion and respiration. Based on the output corresponding lamp will glow. In the respiration channel, low pass filter is used to remove high frequency signal. If there is no respiration, then schmid trigger circuit gives the output to switch on the alarm.

Apnoea period selector circuits contain low frequency alarm oscillator and tone oscillator, and audio amplifier. Apnoea perriod selector circuit drives the alarm circuit. The output of alarm circuit is connected with the sp eaker. So, where there is no respiration for a period of 10 or 20 sec, then audio signal through the speaker and visual signal through the flash light is delivered.