Measures the color intensity of a flame supported by O2 and a specific substance. Sample’s emission of light is measured (rather than the absorbance of light).Typically used to determine the conc. of pure metals and/or Na+, K+, Li+ and Ca++

In this method, fine droplets of the sample is aspirated into gas flame that burns in a chimney. A known amount of lithium salt is added to the sample, as a reference. As a result, red light is emitted by the lithium and yellow and violet beam are emitted due to sodium and potassium respectively. These diffracted colours are made to incident on photodiodes. The photo detector circuits consists of a reverse biased diode in which the current flow increases as intensity of incident light increases. A calibration potentiometer is used in every channel. Since the lithium is used as a standard reference, the output of sodium and potassium channel are calibrated in terms of differences with the known lithium. The output can be compared with the spectral illustration.

The general name given to the group of instruments whose principle of operation is based on the fact that substances of clinical interest selectively absorb or emit EM energy (light) at different wavelengths.

·        Spectrophotometer can be used to determine the entity of an unknown substance, or the concentration of a number of known substances.

·        The type of source / filters used typically determines the type of the spectrophotometer.

·        Rays of light bend around sharp corners, where the amount of bending depends on the wavelength! This results in separation of light into a spectrum at each line.

·        In spectrophotometer, selection filter of colorimeter is replaced by a monochromator. Monochromatic uses a diffraction grating G to disperse light from the lamp. Light falls through the slit S0 into its spectral components.

·        Slit S1 is used for selecting a narrow band of the spectrum which is used to measure the absorption of a sample in the cuvette.

·        Light absorption is varied when the wavelength is varied. Mirror M is used to reduce the size of the instruments. 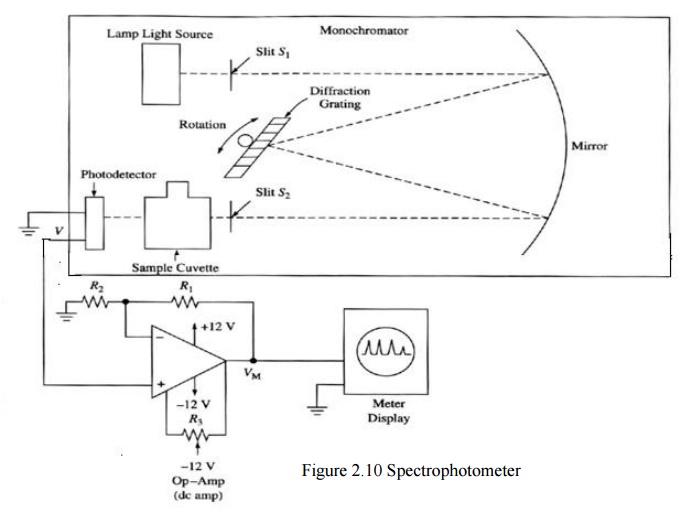