A random variable is a variable that is subject to randomness, which means it could take on different values.

Let the random experiment be the toss of a coin. When ‘n’ coins are tossed, one may be interested in knowing the number of heads obtained. When a pair of dice is thrown, one may seek information about the sum of sample points. Thus, we associate a real number with each outcome of an experiment. In other words, we are considering a function whose domain is the set of possible outcomes and whose range is subset of the set of real numbers. Such a function is called random variable.

Some of the examples of random variable:

(ii) The return on an investment in one-year period.

(iii) Faces on rolling a die.

(iv) Number of customers who arrive at a bank in the regular interval of one hour between 9.00 a.m and 4.30 p.m  from Monday to Friday.

(v)  The sale volume of a store on a particular day. 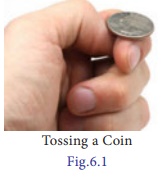 From the above said example, for each outcomes ω, there corresponds a real number X(ω)Since the points of the sample space ‘S’ corresponds to outcomes is defined for each ω ∈S.