For some animal viruses, red blood cells from one or more animal species contain receptors for the virion attachment proteins.

For some animal viruses, red blood cells from one or more animal species contain receptors for the virion attachment proteins. Because the receptors and attachment proteins are present in multiple copies on the cells and virions, respectively, an excess of virus particles coats the cells and causes them to aggregate. This aggregation phenomenon was first dis-covered with influenza virus and is called hemagglutination. The virion attachment pro-tein on the influenza virion is appropriately called the hemagglutinin. Furthermore, the presence of the hemagglutinin in the plasma membrane of the infected cell means that the cells as well as the virions will bind the red blood cells. This reaction, called hemad-sorption, is a useful indicator of infection by certain viruses .

Hemagglutination can be used to estimate the titer of virus particles in a virus-containing sample. Serially diluted samples of the virus preparation are mixed with a constant amount of red blood cells, and the mixture is allowed to settle in a test tube. Agglutinated red blood cells settle to the bottom to form a thin, dispersed layer. If there is insufficient virus to agglu-tinate the red blood cells, they will settle to the bottom of the tube and form a tight pellet. The difference is easily scored visually and the endpoint of the agglutination is used as a rel-ative measure of the virus concentration in the sample.

The plaque assay is a method for determining the titer of infectious virions in a virus prepa-ration or lysate. The sample is diluted serially and an aliquot of each dilution is added to a vast excess of susceptible host cells. For an animal virus, the host cells are usually attached to the bottom of a plastic petri dish; for bacterial cells, adsorption is typically carried out in a cell suspension. In both cases the cells are then immersed in a semisolid medium such as agar, which prevents the released virions from spreading throughout the entire cell popula-tion. Thus the virus released from the initial and subsequent rounds of infection can only in-vade the cells in the immediate vicinity of the initial infected cell on the plate. The end result is an easily visible clearing of dead cells at each of the sites on the plate where one of the original infected cells was located. The clearing is called aplaque (Fig 6 – 12). Visualization in the case of animal cells usually requires staining the cells. By counting the number of plaques and correcting for the dilution factor, the virus titer in the original sample can be calculated. The titer is usually expressed as the number of plaque-forming units per milliliter (pfu/mL). 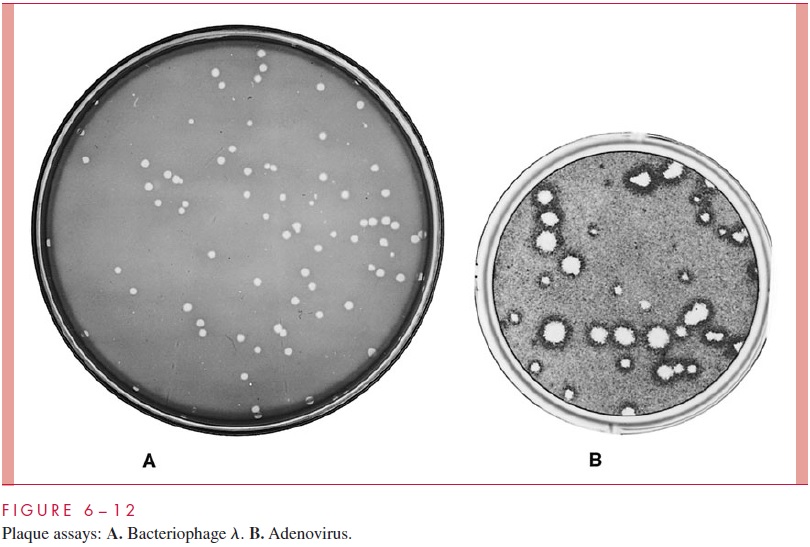