To describe an infection in temporal and quantitative terms it is useful to perform a one-step growth experiment.

To describe an infection in temporal and quantitative terms it is useful to perform a one-step growth experiment (Fig 6 – 1). The objective in such an experiment is to infect every cell in a culture so that the whole population proceeds through the infection process in a synchronous fashion. The ratio of infecting plaque-forming units to cells is called the multiplicity of infection (MOI). By infecting at a high MOI (eg, 10 as in Fig 6 – 1), one can be certain that every cell is infected. 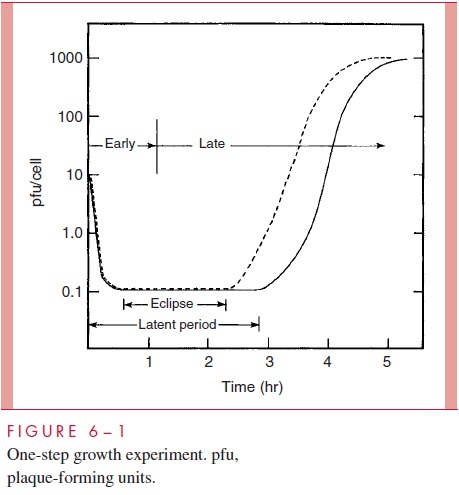 The time course and efficiency of adsorption can be followed by the loss of infectious virus from the medium after removal of the cells (solid line in Fig 6 – 1). In the example shown, adsorption takes about a half-hour and all but 1% of the virus is adsorbed. If sam-ples of the culture containing the infected cells are treated so as to break open the cells prior to assaying for virus (broken line in Fig 6 – 1), it can be observed that infectious virus initially disappears, because no infectious particles are detectable above the back-ground of unadsorbed virus. The period of infection in which no infectious viruses are found inside the cell is called the eclipse phase and emphasizes that the original virions lose their infectivity soon after entry. Infectivity is lost because, as is discussed later, the virus particles are dismantled as a prelude to their reproduction. Later, infectious virus particles rapidly reappear in increasing numbers and are detected inside the cell prior to their release into the environment (see Fig 6 – 1).

The length of time from the beginning of infection until progeny virions are found outside the cells is referred to as thelatentperiod. Latent periods range from 20 minutes to hours for bacteriophages and from a fewhours to many days for animal viruses.

The time in the infection at which genome replication begins is typically used to divide the infection operationally into early and late phases. Early viral gene expression is largely restricted to the production of those proteins required for genome replication; later, the pro-teins synthesized are primarily those necessary for construction of the new virus particles.

The average number of plaque-forming units released per infected cell is called the burst size for the infection. In the example shown, the burst size is about 1000. Burst sizes range from less than 10 for some relatively inefficient infections to millions for some highly virulent viruses.