The first step in every viral infection is the attachment or adsorption of the infecting particle to the surface of the cell.

The first step in every viral infection is the attachment or adsorption of the infecting particle to the surface of the cell. A prerequisite for this interaction is a collision between the virion and the cell. Viruses do not have any capacity for locomotion, and so the collision event is simply a random process determined by diffusion. Therefore, like any bimolecular reaction, the rate of adsorption is determined by the concentrations of both the virions and the cells.

Only a small fraction of the collisions between a virus and its host cell lead to a suc-cessful infection, because adsorption is a highly specific reaction that involves protein molecules on the surface of the virion called virion attachment proteins and certain molecules on the surface of the cell called receptors. Typically there are 104 to 105 recep-tors on the cell surface. Receptors for some bacteriophages are found on pili, although the majority adsorb to receptors found on the bacterial cell wall. Receptors for animal viruses are usually glycoproteins located in the plasma membrane of the cell.

Table 6 – 1 lists some of the receptors that have been identified for medically important viruses. It appears that viruses have evolved to make use of a wide variety of surface molecules as receptors, which are normally signaling devices or immune system components. Any attempts to de-sign agents that block viral infections by binding to the receptors must consider the possi-bility that the loss of the normal cellular function associated with the receptors would have serious consequences for the host organism. 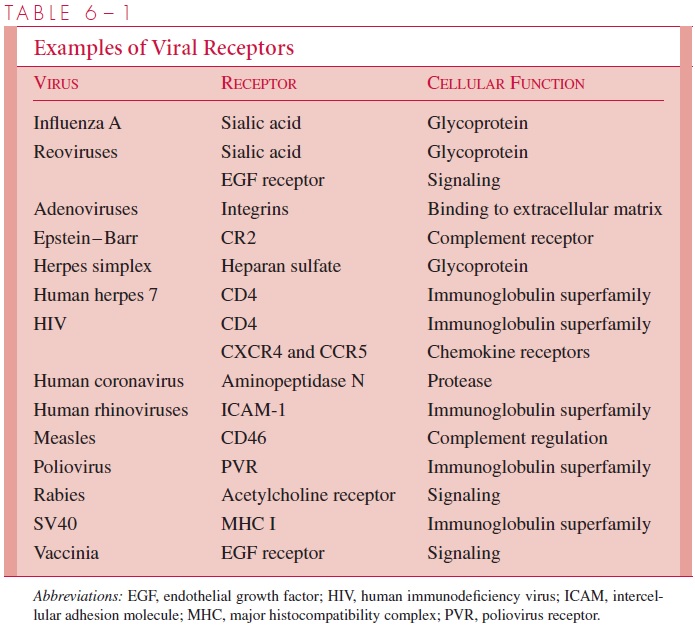 For some viruses, two different surface molecules, called coreceptors, are in-volved in adsorption. Although CD4 was originally thought to be the sole receptor for human immunodeficiency virus type 1 (HIV-1), the discovery of a family of corecep-tors that normally function as chemokine receptors may explain why natural resistance against the virus is found in individuals with variant forms of these signaling mole-cules. Receptors for some animal viruses are also found on red blood cells of certain species and are responsible for the phenomena of hemagglutination and hemadsorp-tion discussed later.

In some cases, a region of the capsid protein serves the function of the attachment protein. For polioviruses, rhinoviruses, and probably other picornaviruses, the region on the capsid that binds to the receptor is found at the bottom of a cleft or trough that is too narrow to allow access to antibodies. This particular arrangement is clearly advantageous to the virus because it precludes the production of antibodies that might directly block re-ceptor recognition. 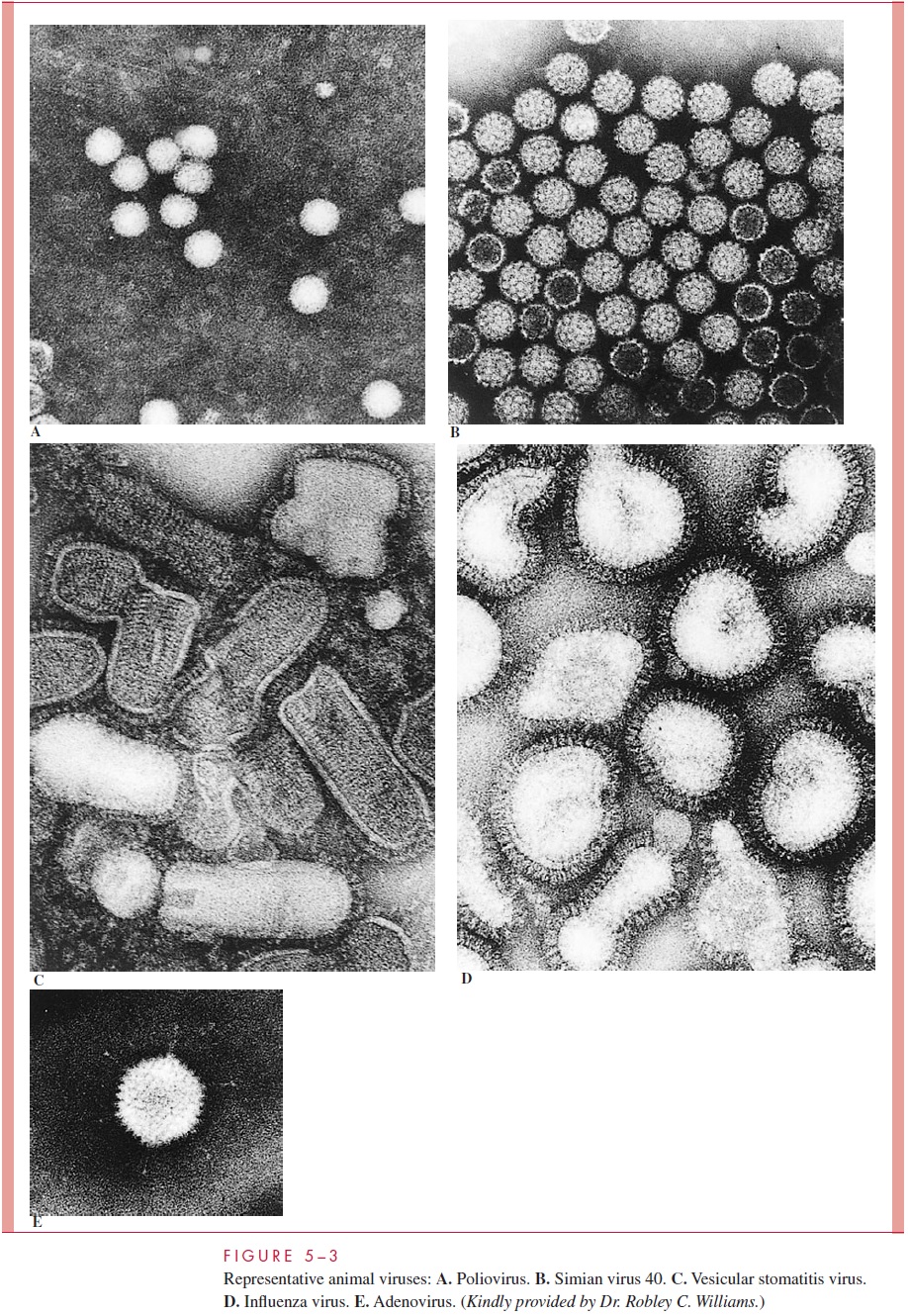 The repeating subunit structure of capsids and the multiplicity of spikes on enveloped viruses are probably important in determining the strength of the binding of the virus to the cell. The binding between a single virion attachment protein and a single receptor pro-tein is relatively weak, but the combination of many such interactions leads to a strong association between the virion and the cell. The fluid nature of the animal cell membrane may facilitate the movement of receptor proteins to allow the clustering that is necessary for these multiple interactions.

A particular kind of virus is capable of infecting only a limited spectrum of cell types called its host range. Thus, although a few viruses can infect cells from differ-ent species, most viruses are limited to a single species. For example, dogs do not con-tract measles, and humans do not contract distemper. In many cases, animal viruses infect only a particular subset of the cells found in their host organism. Clearly this kind of tissue tropism is an important determinant of viral pathogenesis. In most cases studied, the specific host range of a virus and its associated tissue tropism are deter-mined at the level of the binding between the cell receptors and virion attachment pro-teins. Thus, these two protein components must possess complementary surfaces that fit together in much the same way as a substrate fits into the active site of an enzyme. It follows that adsorption occurs only in that fraction of collisions that lead to success-ful binding between receptors and attachment proteins and that the inability of a virus to infect a cell type is usually due to the absence of the appropriate receptors on the cell.

The exquisite specificity of these interactions is well illustrated by the case of a particular mouse reovirus. It has been found that the tissue tropism, and therefore, the resultant pathology, are altered by a point mutation that changes a single amino acid in the virion attachment protein. A few cases are known in which the host range of a virus is determined at a step after adsorption and penetration, but these are the excep- tions rather than the rule.

Once a virus particle has penetrated to the inside of a cell, it is essentially hidden from the host immune system. Thus, if protection from a virus infection is to be accom- plished at the level of antibody binding to the virions, it must occur before adsorption and prevent the virus from attaching to and penetrating the cell. It is therefore not surprising that most neutralizing antibodies, whether acquired as a result of natural infection or vac- cination, are specific for virion attachment proteins.