The disappearance of infectious virus during the eclipse phase is a direct consequence of the fact that viruses are dismantled prior to being replicated.

The disappearance of infectious virus during the eclipse phase is a direct consequence of the fact that viruses are dismantled prior to being replicated. As is discussed later, the un-coating step may be simultaneous with entry or may occur in a series of steps. Ultimately the nucleocapsid or core structure must be transported to the site or compartment in the cell where transcription and replication will occur.

The processes of penetration and uncoating are simultaneous for all bacteriophages. Thus, the viral capsids are shed at the surface, and only the nucleic acid genome enters the cell. In some cases, a small number of virion proteins may accompany the genome into the cell, but these are probably tightly associated with the nucleic acid or are essential en-zymes needed to initiate the infection.

Bacteriophages with tails have evolved these special appendages to facilitate the en-try of the genome into the cell. The process of penetration and uncoating for bacterio-phage T4 is shown schematically in Figure 6 – 2. The tail fibers extending from the end of the tail are responsible for the attachment of the virion to the cell wall, and, in the next step, the end of the tail itself makes intimate contact with the cell surface. Finally the DNA of the virus is injected from the head directly into the cell through the hollow tail structure. The process has been likened to the action of a syringe, but the energetics and the nature of the orifice in the cell surface through which the DNA travels are poorly understood.

Paramyxoviruses (eg, measles), some retroviruses (eg, HIV-1), and herpesviruses en-ter by a process called direct fusion (see Fig 6 – 3). The envelopes of these viruses con-tain protein spikes that promote fusion of the viral membrane with the plasma membrane of the cell, releasing the nucleocapsid directly into the cytoplasm. Because the viral enve-lope becomes incorporated into the plasma membrane of the infected cell and still pos-sesses its fusion proteins, infected cells have a tendency to fuse with other uninfected cells. Cell – cell fusion is a hallmark of infections by paramyxoviruses and HIV-1 and can be important in the pathology of diseases such as measles and acquired immunodefi-ciency syndrome (AIDS). 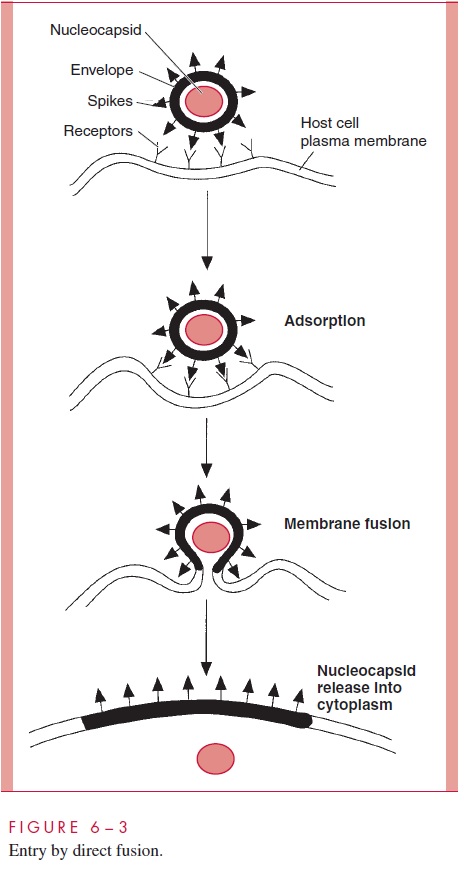 The mechanism for the entry of most of the remaining enveloped animal viruses, such as orthomyxoviruses (eg, influenza viruses), togaviruses (eg, rubella virus), rhabdoviruses (eg, rabies), and coronaviruses, is shown in Figure 6 – 4. Following adsorption, the virus particles are taken up by a cellular mechanism called receptor-mediated endocytosis, which is normally responsible for internalizing growth factors, hormones, and some nutri-ents. When it involves viruses, the process is referred to as viropexis. 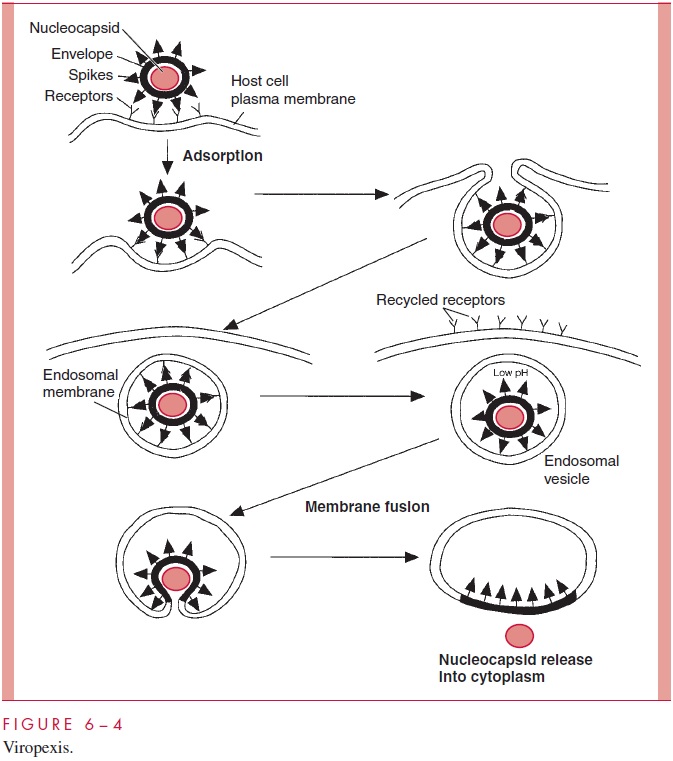 In viropexis, the adsorbed virions become surrounded by the plasma membrane in a reaction that is probably facilitated by the multiplicity of virion attachment proteins on the surface of the particle. Pinching off of the cellular membrane by fusion encloses the virion in a cytoplasmic vesicle termed the endosomal vesicle. The nucleocapsid is now surrounded by two membranes, the original viral envelope and the newly acquired endo-somal membrane. The surface receptors are subsequently recycled back to the plasma membrane, and the endosomal vesicle is acidified by a normal cellular process. The low pH of the endosome leads to a conformational change in a viral spike protein, which results in the fusion of the two membranes and release of the nucleocapsid into the cyto-plasm. In some cases, the contents of the endosomal vesicle may be transferred to a lyso-some prior to the fusion step that releases the nucleocapsid.

Naked capsid viruses, such as poliovirus, reovirus, and adenovirus, also appear to enter the cell by viropexis. However, in this case, the virus cannot escape the endosomal vesicle by membrane fusion as described earlier for enveloped viruses. For poliovirus it appears that the viral capsid proteins in the low-pH environment of the endosome expose hydrophobic domains. This process results in the binding of the virions to the membrane and release of the nucleic acid genome into the cytoplasm.

In other cases the virions may escape into the cytoplasm by simply promoting the lysis of the vesicle. This step is a potential target of antiviral chemotherapy, and some drugs have been developed that bind to the capsids of picornaviruses and prevent the release of the virus particles from the endosome.

Reovirus is unusual in that prior to release into the cytoplasm, the contents of the en-dosome are transferred to a lysosome where the lysosomal proteases strip away part of the capsid proteins and activate virion-associated enzymes required for transcription.

Even in the relatively simple bacterial cell, there is evidence that the entering nucleic acid must be directed to a particular cellular locus to initiate the infection process. Pilot pro-teins have been described that accompany the phage genome into the bacterial cell andserve the function of “piloting” the nucleic acid to a particular target, such as a membrane site where transcription and replication are to occur.

The ultimate fate of internalized animal virus particles depends on the particular virus and on the cellular compartment where replication occurs. Most RNA viruses with the ex-ception of influenza viruses and the retroviruses replicate in the cytoplasm, the immediate site of entry. Retroviruses, influenza viruses, and all the DNA viruses except the poxviruses must move from the cytoplasm to the nucleus to replicate. The larger DNA viruses, such as herpesviruses and adenoviruses, must uncoat to the level of cores prior to entry into the nucleus. The smaller DNA viruses, such as the parvoviruses and the papo-vaviruses, enter the nucleus intact through the nuclear pores and subsequently uncoat in-side. The largest of the animal viruses, the poxviruses, carry out their entire replicative cycle in the cytoplasm of the infected cell.