From the commercial point of view, proteins may be classified into the following categories.

Blood carries out several functions and is one of the best mediums for transportation in an animal. A better understanding of haematapoiesis (formation of blood cells) as well as factors responsible for blood coagulation has led to the discovery of several useful proteins. Several proteins from blood and plasma have been commercially available for decades. While these products have traditionally been obtained from blood donated by human volunteers, some are now produced by recombinant DNA technology. For example Factor VIII for treatment of Haemophilia A, Factor IX for treatment of Haemophlia B, Hepatitis B vaccine for prevention of hepatitis etc.

Polyclonal antibodies have been used for more than a century for therapeutic purposes. More recently monoclonal antibody preparations as well as antibody fragments produced by recombinant DNA technology have found therapeutic use. For example tissue plasminogen activator (t-PA) is a proteolytic enzyme used to digest blocks in arteries following myocardial infarctions. A monoclonal antibody OKT-3 is used to prevent rejection following kidney transplantation because the antibody blocks those immune cells which attack foreign grafts.

A number of hormone preparations have been used clinically for many decades. Though insulin was prepared from the pancreas of cows and pigs, the ability to genetically transfer human insulin gene into bacteria and the ability to modify amino acid residues (protein engineering) has facilitated the development of modified forms which are faster acting like humulin. Humulin acts in 15 min unlike pig insulin which takes 3 hours. Another growth factor- platelet derived growth factor has been approved for diabetics who develop skin ulcers. Several other growth factors are under various stages of clinical trials.

Several new regulatory factors were discovered that did not fit the classical definition of a hormone. Initially they were known as cytokines. These include interferons, interleukins, tumor necrosis factor and colony stimulating factors. The interferon family of INF alpha, beta and gamma have found widespread therapeutic application; interferon alpha is used for treatment of Hepatitis C, beta for Multiple Sclerosis and gamma for Chronic Granulomatous disease.

Enzymes and antibodies have found a range of analytical applications in the diagnosis of diseases; hexokinase for quantitative estimation of glucose in serum, uricase for uric acid levels in serum, horse radish peroxidise and alkaline phosphates in ELISA etc.

Functional non-catalytic proteins are those which have properties such as emulsification, gelation, water binding, whipping and foaming etc. (Table 2). For example kappa casein, a component of casein is involved in micelle stabilisation of milk proteins and keep the proteins suspended uniformly in milk because it behaves like a lipid molecule (2/3rd of the protein is hydrophobic). The food industry has exploited these non-catalytic proteins as illustrated in the below. 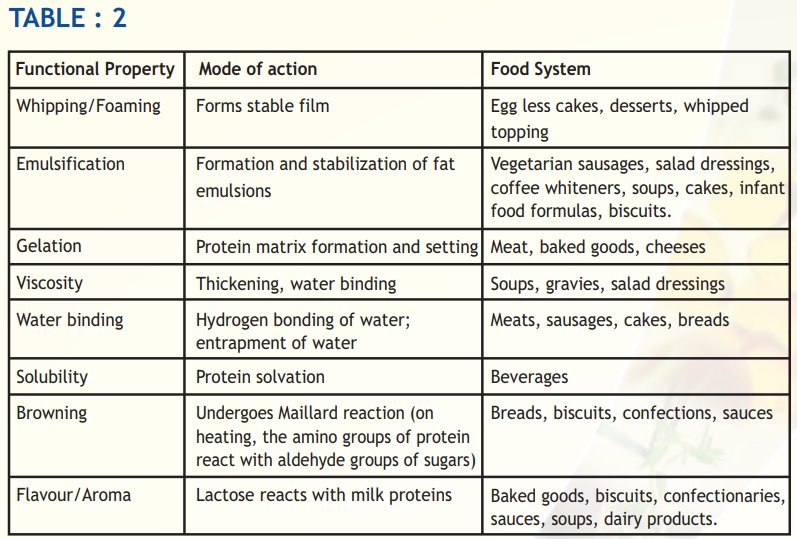 Nutraceutical is a word coined from combination of nutrition and pharmaceuticals. It has been observed that several nutritional proteins also have therapeutic functions. For example whey protein concentrates, lactose free milk (for lactose intolerant babies) and infant food formulations.

Where does one get the raw building materials such as amino acids needed to make all body proteins? During infancy we depend on milk. Baby milk formulations are also there (Amul, Lactogen etc.) which have been formulated to have similar composition as mother's milk. All these food materials provide the essential components nutritionally for growth and development during the first few months of our existence. A typical composition of milk from buffalo, human and cow sources is given in theTable 3 from which baby milk formulations can be made to suit an infant.

Table 3. Composition of milk from buffalo, human and cow. 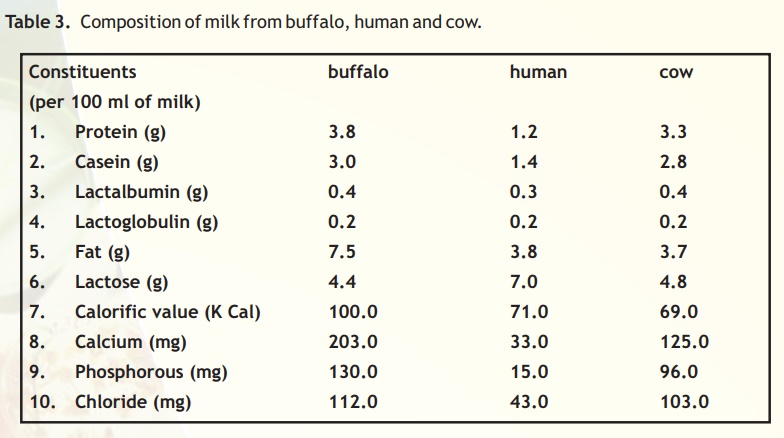 From the Table 3 it can be observed that milk contains several proteins, carbohydrates, lipids, vitamins, antibodies, minerals etc. It is interesting to note that human milk has nearly half the amount of casein as compared to cow and buffalo. Besides use of milk as a nutritional source, claims have been made to the effect that curd is beneficial in the management of some types of intestinal infections according to our ancient Sanskrit scriptures dating back to 6000 BC. Since time immemorial whey (liquid part of curds) has been administered to the sick for the treatment of numerous ailments. In 1603, Baricelli reported on the therapeutic use of cow's or goat’s whey, sometimes mixed with honey and herbs. The spectrum of illnesses treated with whey include jaundice, infected skin lesions, genitor-urinary tract infections. Gallen and Hippocrates insisted on a minimum daily drinking of one litre of whey. Using modern scientific research it has been possible to explain these observations. Whey proteins result in the elevation of a tripeptide glutathione(gamma-glutamyl cysteinyl glycine) in cells. This peptide is a reducing compound and has a broad range of functions including detoxification of xenobiotics and protection of cellular components from the effect of oxygen intermediates and free radicals. More recently curd has also been used as a pro-biotic (administered with antibiotics) because it is a good source of beneficial bacteria which can colonise the intestinal tract. Table 4 gives the useful components of whey. 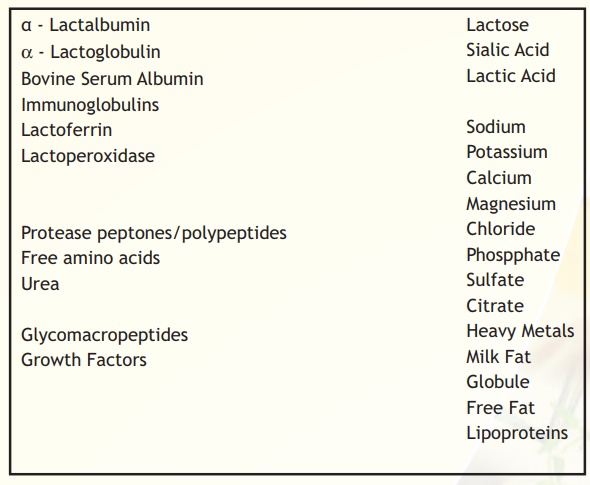