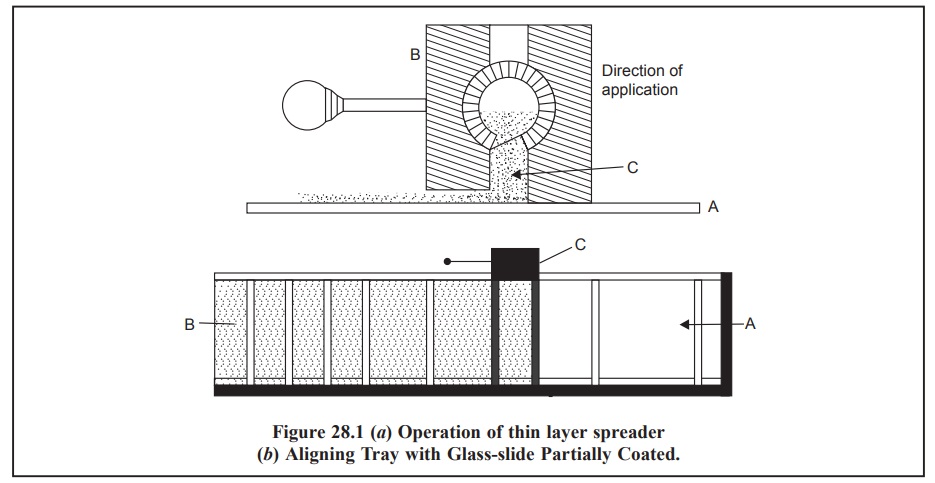 The paramount importance with regard to the preparation of thin layer is that it must be uniform and consistent throughout.

PREPARATION OF THIN LAYERS ON PLATES

The paramount importance with regard to the preparation of thin layer is that it must be uniform and consistent throughout. Various means have been put forward to apply thin layers of powdered or their suspen-sions or their slurries to the carrier plates with a view to achieve an uniform layer throughout the length of the plates. These are namely :

In order to obtain layers of equal thickness, a measured amount of the suspen-sion or slurry is placed on a given-size plate that is rested on an absolutely labelled surface. The plate is subsequently tipped backward and forward to permit the slurry (or suspension) to spread uniformly on the surface of the plate.

Peifer* in 1962, was pioneer in introducing this technique, whereby two plates at a time back-to-back are dipped together in a slurry of the adsorbent in either chloroform or chloroform-methanol. However, this particular methods is not much in use now-a-days.

Reitsema** was first to develop this method by making use of a small paint-sprayer for the distribution of the suspension or slurry onto the surface of the glass-plate.

(i) Non-uniformity of layers on a single-plate, and

(ii) Variation observed from one plate to the other was significant.

In this particular case, the suspension or slurry is put in an ‘applicator’, which is subsequently moved either over the stationary glass-plate or vice-versa i.e., it is held stationary while the glass plate is pulled or pushed through. This technique termed as ‘spreading’ usually yields uniform thin layers on the glass plates.

·              placing them between glass or metal guides which are thicker than glass plates by the amount that is desired for the adsorbent layer, and

(i) Aligning Tray : It is a tray on which the glass plates are placed in a series or in-a-line, and

(ii) Spreader : It holds the spreading mixture (as a slurry or suspension) and applies it uniformly in a thin-layer.

Figure 28.1 (a) shows the operation of thin-layer spreader ; while Figure 28.1 (b) depicts the aligning tray with glass-slide partially coated. 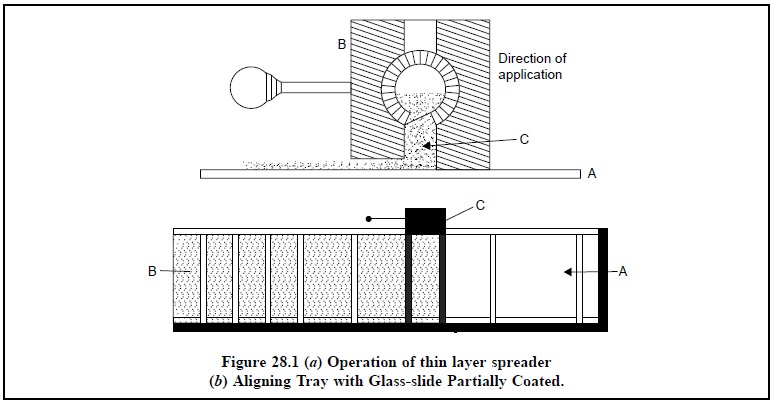 C = Slurry of the adsorbent.

Here, the slurry (C) is put in the spreader (B) and then moved along the direction of application onto the surface of the glass plate (A) to obtain an uniform layer,

B = Layer of adsorbent, and

The slurry of the adsorbent is introduced into the aligning tray (C) which is then moved onto the glass plate (A) to obtain an uniform layer of adsorbent (B).

In 1962, a well known West German firm DESAGA introduced a much improved and simplified ver-sion of a TLC-spreader that could conveniently give uniform layer thickness raging from 0.00 to 2,0 mm.

(i) Ready-for-use TLC Plates with Cellulose-F, and

Interestingly, these precoated TLC-plates essentially have : first, a special abrasive-resistant layer con-taining no gypsum ; and secondly, the layer contains a reliable fluorescent indicator that is excited to emit a fluorescence under either a short-wave or a long-wave UV light.

Advantages : These ‘ready-for-use’ TLC-plates have the following advantages namely :

·              The properties of the layer minimise spot-diffusion that helps both more strong concentration of spots and more distinctive separations with higher sensitivity,

·              It may accept more corrosive spray-reagents, for example : conc. sulphuric acid, phosphoric acid, phosphomolybdic acid, perchloric acid on antimony trichloride ; and the sprayed plates could be heated upto 110-120 °C without any darkening whatsoever,

·              The migration rate is slightly enhanced when compared to hand coated plates, and