Prediction of Human PK/PD Based on Preclinical Information

Prior to first human studies, several preclinical in vivo and in vitro experiments are performed to understand the PK of potential new drugs as well as their safety and efficacy in animal models.

Prediction of Human PK/PD Based on Preclinical Information 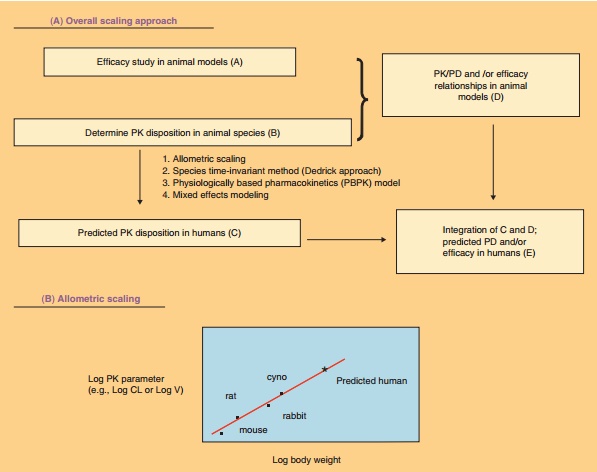 Over the years, many theories and different approaches have been proposed and used for scaling preclinical data to clinical data. Figure 8 illustrates the prediction of human PK/PD based on preclinical information. Allometric scaling is the simplest and most widely used method, which is based on the power law relationship between body size and physiological and anatomical parameters. This can be described by equation: Y¼a⋅ BWb, where Y is the PK parameter (such as CL, V); BW is the bodyweight; a is the coefficient; b is the exponent of the allometric equations. Maximum life potential, brain weight, and two-term power equation have been proposed as correction factors to improve the predic-tion for CL. The accuracy of prediction of PK parameters by allometric scaling is dependent on many factors, such as species, experimental design, analytical errors, and others (Mahmood, 2005; Tangand Mayersohn, 2005). However, there are only few reports on PK predictions using allometric scaling for mAbs. Lin et al. (1999) projected the CL of bevacizu-mab in human as ~2.4 mL/day/kg based on simple allometric scaling principles. Also Kelley et al. (2006) used simple allometry to predict the CL of the anti-CD40 mAb of about 12 mL/day/kg in humans. For these two examples, the human clearance was con-firmed to be in agreement with the preclinical prediction by allometry.

Another approach for interspecies scaling is physiologically based pharmacokinetic (PBPK) mod-eling, which establishes the animal PK based on preclincial in vitro and in vivo data in the first step. In the second step, the model is then scaled to humans by using human physiological information such as blood flow, tissue volumes as well as potentially some additional human in vitro data. Although PBPK modeling provides a mechanism based evaluation of drug disposition, this approach is costly, mathemati-cally complex and time consuming. Therefore in drug development and discovery, PBPK models are not as widely used compared to allometry. However, for mAb interspecies scaling, PBPK modeling allows to explore some physiological factors by simulation technology which can not be incorporated into empirical allometric scaling methods, such as the binding affinity, binding kinetics and non-linear PK. Baxter et al. (1995) used PBPK models to predict PK of mAb against carcinoembryonic antigen in human in different tissues including tumor compartments. It also has been shown that a PBPK model including FcRn components worked very well to describe the PK of an intact mAb and its Fab in different tissues in mice, with or without tumor (Ferl et al., 2005).

In addition, species-invariant time method (Mahmood, 2005) and non-linear mixed-effect model-ing (Martin-Jimenez and Riviere, 2002; Jolling et al., 2005) have been used for interspecies scaling for small molecules. Species-invariant time method, also called Dedrick approach, was first described in 1973 (Dedrick, 1973). Physiological time, the time required to complete a species independent physiological event, can be obtained by transformation of chron-ological time into a species invariant time (equivalent time, kallynochrons, apolysichron, and dieneti-chrons). In the case that PK follows allometric principles the transformation of chronological to physiological time should provide superimposed concentration-time profiles for all species. In his pioneering work Dedrick demonstrated this for methotrexate as model compound (Dedrick, 1973).

Interspecies allometric scaling can also be performed using a population approaches (non-linear mixed effect modeling techniques). Allometric coeffi-cients and exponents as well as the variability from inter-animals, intra-animals and inter-species and random errors can be estimated in one single step by using this approach.

Due to the complexity of PD, any extrapolation to human requires more complex considerations than for PK. Through PK/PD modeling and integration the interspecies scaling of PK, the PD in human may bepredicted if the PK/PD relationship is assumed to be the same between the animal models and humans. For example, a PK/PD model was first developed to optimize the dosing regimen of the mAb against EGF/r3 using tumor bearing nude mice as an animal model of human disease (Duconge et al., 2004). This PK/PD model was then integrated with allometric

scaling to calculate the dosage schedule required in a potential clinical trial to achieve a certain effect (Duconge et al., 2004).

In summary, species differences in antigen density, antigen–antibody binding, and antigen ki-netics, differences in FcRn binding between species, the immunogenicity and other factors need to be considered during PK/PD scaling of mAbs from animals to humans.