How Antibodies Function as Therapeutics

HOW ANTIBODIES FUNCTION AS THERAPEUTICS

The pharmacological effects of antibodies are first initiated by the specific interaction between antibody and antigen. Monoclonal antibodies generally exhibit exquisite specificity for the target antigen. The binding site on the antigen called the epitope can be linear or conformational, and may comprise contin-uous or discontinuous amino acid sequences. The epitope is the primary determinant of the antibody’s modulatory functions and depending on the epitope, the antibody may exert antagonist or agonist effects, or it may be non-modulatory. The epitope may also influence the antibody’s ability to induce ADCC and CDC. Monoclonal antibodies exert their pharmacolo-gical effects via multiple mechanisms that include direct modulation of the target antigen, CDC and ADCC, and delivery of a radionuclide or immuno-toxin to target cells.

The complement system is an important part of the innate (i.e., non-adaptive) immune system. It consists of many enzymes that form a cascade with each enzyme acting as a catalyst for the next. CDC results from interaction of cell-bound monoclonal antibodies with proteins of the complement system. CDC is initiated by binding of the complement protein, C1q, to the Fc domain. The IgG1 and IgG3 isotypes have the highest CDC activity, while the IgG4 isotype lacks C1q binding and complement activation (Presta, 2002). Upon binding to immune complexes, C1q undergoes a conformational change and the resulting activated complex initiates an enzymatic cascade involving complement proteins C2 to C9 and several other factors. This cascade spreads rapidly and ends in the formation of the membrane attack complex (MAC), which inserts into the membrane of the target and causes osmotic disruption and lysis of the target. Figure 4 illustrates the mechanism for CDC with rituximab (a chimeric antibody, which targets the CD20 antigen) as an example.

ADCC is a mechanism of cell-mediated immunity whereby an effector cell of the immune system actively lyses a target cell that has been bound by specific antibodies. It is one of the mechanisms through which antibodies, as part of the humoral immune response, can act to limit and contain infection. Classical ADCC is mediated by natural killer (NK) cells, monocytes or macrophages but an alternate ADCC is used by eosinophils to kill certain parasitic worms known as helminths. ADCC is part of the adaptive immune response due to its dependence on a prior antibody response. The typical ADCC involves activation of NK cells, monocytes or macrophages and is dependent on the recognition of antibody-coated infected cells by Fc receptors on the surface of these cells. The Fc receptors recognize the Fc portion of antibodies such as IgG, which bind to the surface of a pathogen-infected target cell. The Fc receptor that exists on the surface of NK cell is called CD16 or FcγRIII. Once bound to the Fc receptor of IgG the NK cell releases cytokines such as IFN-γ, and cytotoxic granules like perforin and granzyme that enter the target cell and promote cell death by triggering apoptosis. This is similar to, but independent of, responses by cyto-toxic T-cells. Figure 5 illustrates the mechanism for ADCC with rituximab as an example. 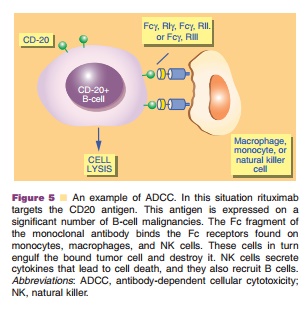 Monoclonal antibodies achieve their therapeutic effect through various mechanisms. In addition to the above mentioned effector functions they can have direct effects in producing apoptosis or programmed cell death. It is characterized by nuclear DNA degradation, nuclear degeneration and condensation, and phago-cytosis of the cell remains.