PK/PD modeling has been used to characterize efalizumab plasma concentrations and CD11a expres-sion on CD3-positive lymphocytes in chimpanzees and in subjects with psoriasis.

In clinical drug development, PK/PD modeling approaches can be applied as analytical tools for identifying and characterizing the dose-response relationships of drugs and the mechanisms and modulating factors involved. Additionally, they may be used as predictive tools for exploring various dosage regimens as well as for optimizing further clinical trial designs, which might allow one to perform fewer, more focused studies with improved efficiency and cost effectiveness. The PK/PD database established during the preclinical and clinical learning phases in the development process and supplemented by population data analysis provides the backbone for these assessments.

PK/PD modeling has been used to characterize efalizumab plasma concentrations and CD11a expres-sion on CD3-positive lymphocytes in chimpanzees and in subjects with psoriasis (Bauer et al., 1999). As the PK data revealed that CL of efalizumab was not constant across dose levels, one of the models described by Bauer et al. (1999) incorporated a Michaelis–Menten clearance term into the PK equa-tions and utilized an indirect-response relationship to describe CD11a turnover. However in the above model the exposure-response relationship of efalizu-mab was not addressed and another report expanded on the developed receptor-mediated PK and PD model by incorporating data from five Phase I and II studies to develop a PK–PD-efficacy (E) model to further increase the understanding of efalizumab interaction with CD11a on T-cells and consequent reduction in severity of psoriasis (Ng et al., 2005). A general outline of the mechanistic modeling approach for various molecules is presented alongside the model for efalizumab in Figure 14A. The description of the PK–PD-efficacy model of efalizumab in psoriasis patients is described below and is schema-tically represented in Figure 14B. Details on para-meters utilized in the model can be found in the paper by Ng et al. (2005). 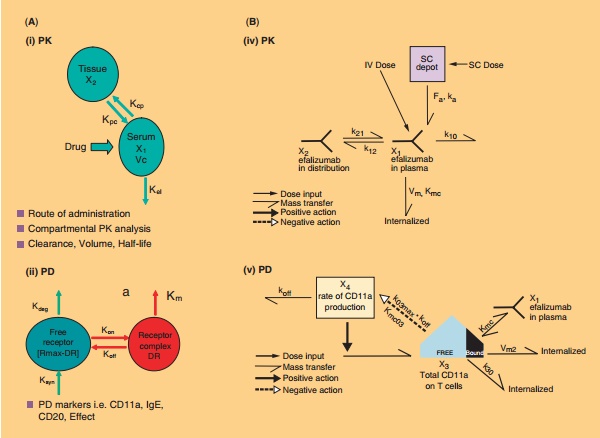 A first-order absorption, two-compartment model with both linear and Michaelis-Menten elimination was used to describe the plasma efalizumab concen-tration data. This model is schematically represented in Figure 14B (iv).

A receptor-mediated PD model previously developed was used to describe the dynamic interaction of efalizumab to CD11a, resulting in the removal of efalizumab from the circulation and reduction of cell surface CD11a (Bauer, Dedrick et al., 1999). This model is schematically represented in Figure 14B (v).

profile of efalizumab was reasonably described by use of the first-order a b s o r p t i o n , t w o - c o m p a r t m e n t m o d e l w i t h Michaelis–Menten elimination from the central com-partment. In addition, the PD model described the observed CD11a-time data from all the studies reasonably well. In the efficacy model an additional CD11a-independent component to psoriasis skin production accounted for incomplete response to efalizumab therapy and the model described the observed data well. Figure 15 depicts the fit of the model to the PK/PD/efficacy data. 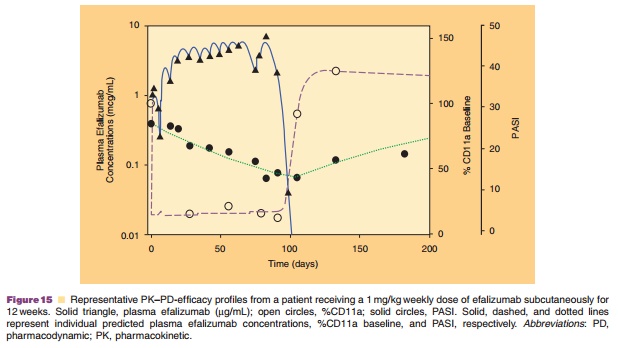 The PK–PD-efficacy model developed for efali-zumab has a broad application to antibodies that target cell-bound receptors, subjected to receptor-mediated clearance, and for which coating and modulation of the receptors are expected to be related to clinical response (Mould et al., 1999). Despite the non-linear PK of these agents, the model can be used to describe the time course of the PD effect and efficacy after different dosing regimens.