The structures of spironolactone and amiloride are shown in Figure 15–9. Spironolactone is a synthetic steroid that acts as a competitive antagonist to aldosterone. Onset and duration of its action are determined by the kinetics of the aldosterone response in the tar-get tissue. Substantial inactivation of spironolactone occurs in the liver. Overall, spironolactone has a rather slow onset of action, requiring several days before full therapeutic effect is achieved. Eplerenone is a spironolactone analog with much greater selectiv-ity for the mineralocorticoid receptor. It is several hundredfold less active on androgen and progesterone receptors than spironolac-tone, and therefore, eplerenone has considerably fewer adverse effects. 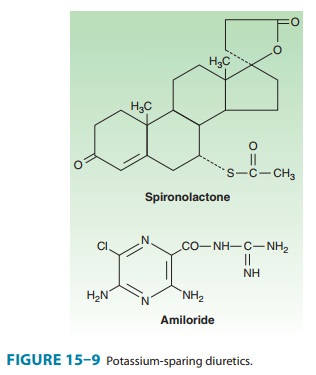 Amiloride and triamterene are direct inhibitors of Na+ influx in the CCT (cortical collecting tubule). Triamterene is metabolized in the liver, but renal excretion is a major route of elimination for the active form and the metabolites. Because triamterene is exten-sively metabolized, it has a shorter half-life and must be given more frequently than amiloride (which is not metabolized).

Potassium-sparing diuretics reduce Na+ absorption in the collect-ing tubules and ducts. Potassium absorption (and K+ secretion) at this site is regulated by aldosterone, as described above. Aldosterone antagonists interfere with this process. Similar effects are observed with respect to H+ handling by the intercalated cells of the collect-ing tubule, in part explaining the metabolic acidosis seen with aldosterone antagonists (Table 15–2). 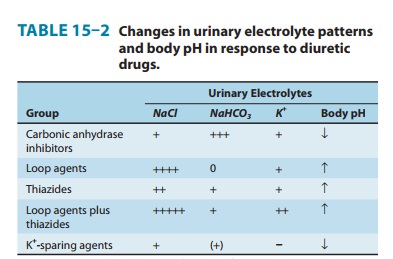 Spironolactone and eplerenone bind to mineralocorticoid recep-tors and blunt aldosterone activity. Amiloride and triamterene do not block aldosterone, but instead directly interfere with Na+ entry through the epithelial Na+ channels (ENaC, Figure 15-5), in the apical membrane of the collecting tubule. Since K+ secretion is coupled with Na+ entry in this segment, these agents are also effec-tive K+-sparing diuretics.

The actions of the aldosterone antagonists depend on renal pros-taglandin production. The actions of K+-sparing diuretics can be inhibited by NSAIDs under certain conditions.

Potassium-sparing diuretics are most useful in states of mineralo-corticoid excess or hyperaldosteronism (also called aldosteronism), due either to primary hypersecretion (Conn’s syndrome, ectopic adrenocorticotropic hormone production) or secondary hyperal-dosteronism (evoked by heart failure, hepatic cirrhosis, nephrotic syndrome, or other conditions associated with diminished effec-tive intravascular volume). Use of diuretics such as thiazides or loop agents can cause or exacerbate volume contraction and may cause secondary hyperaldosteronism. In the setting of enhanced mineralocorticoid secretion and excessive delivery of Na+ to distal nephron sites, renal K+ wasting occurs. Potassium-sparing diuret-ics of either type may be used in this setting to blunt the K+ secre-tory response. 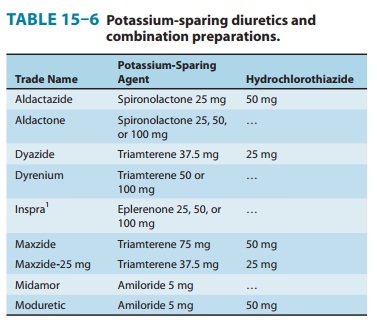 It has also been found that low doses of eplerenone (25–50 mg/d) may interfere with some of the fibrotic and inflammatory effects of aldosterone. By doing so, it can slow the progression of albu-minuria in diabetic patients. More important is that eplerenone has been found to reduce myocardial perfusion defects after myo-cardial infarction. In one clinical study, eplerenone reduced mortality rate by 15% (compared with placebo) in patients with mild to moderate heart failure after myocardial infarction.

Unlike most other diuretics, K+-sparing diuretics reduce urinary excretion of K+ (Table 15–2) and can cause mild, moderate, or even life-threatening hyperkalemia. The risk of this complication is greatly increased by renal disease (in which maximal K+ excre-tion may be reduced) or by the use of other drugs that reduce or inhibit renin (β blockers, NSAIDs, aliskiren) or angiotensin II activity (angiotensin-converting enzyme inhibitors, angiotensin receptor inhibitors). Since most other diuretic agents lead to K+ losses, hyperkalemia is more common when K+-sparing diuretics are used as the sole diuretic agent, especially in patients with renal insufficiency. With fixed-dosage combinations of K+-sparing and thiazide diuretics, the thiazide-induced hypokalemia and meta-bolic alkalosis are ameliorated. However, because of variations in the bioavailability of the components of fixed-dosage forms, the thiazide-associated adverse effects often predominate. Therefore, it is generally preferable to adjust the doses of the two drugs separately.

By inhibiting H+ secretion in parallel with K+ secretion, the K+-sparing diuretics can cause acidosis similar to that seen with type IV renal tubular acidosis.

Synthetic steroids may cause endocrine abnormalities by actions on other steroid receptors. Gynecomastia, impotence, and benign prostatic hyperplasia (very rare) all have been reported with spironolactone. Such effects have not been reported with epler-enone, presumably because it is much more selective than spironolactone for the mineralocorticoid receptor and virtually inactive on androgen or progesterone receptors.

The combination of triamterene with indomethacin has been reported to cause acute renal failure. This has not been reported with other K+-sparing diuretics.

Triamterene is only slightly soluble and may precipitate in the urine, causing kidney stones.

Potassium-sparing agents can cause severe, even fatal, hyper-kalemia in susceptible patients. Patients with chronic renal insuf-ficiency are especially vulnerable and should rarely be treated with these diuretics. Oral K+ administration should be discontinued if K+-sparing diuretics are administered. Concomitant use of other agents that blunt the renin-angiotensin system (β blockers, ACE

inhibitors, ARBs) increases the likelihood of hyperkalemia. Patients with liver disease may have impaired metabolism of tri-amterene and spironolactone, so dosing must be carefully adjusted. Strong CYP3A4 inhibitors (eg, erythromycin, fluconazole, dilti-azem, and grapefruit juice) can markedly increase blood levels of eplerenone, but not spironolactone.