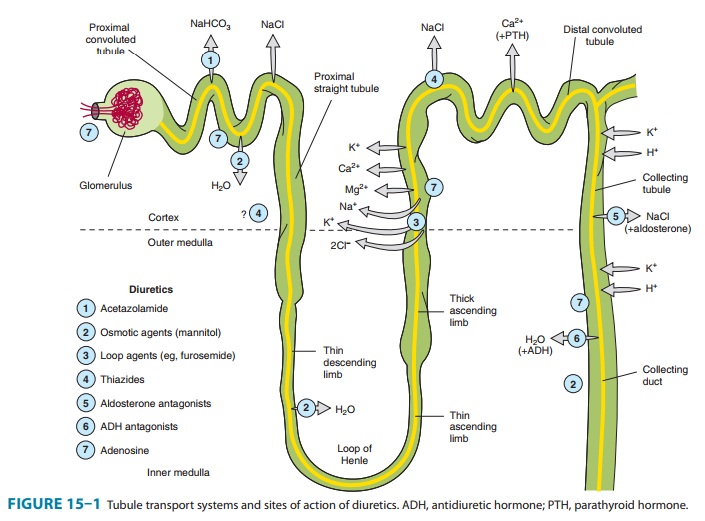 The collecting tubule system that connects the DCT to the renal pelvis and the ureter consists of several sequential tubular segments:

The collecting tubule system that connects the DCT to the renal pelvis and the ureter consists of several sequential tubular segments: the connecting tubule, the collecting tubule, and the collecting duct (formed by the connection of two or more collecting tubules). Although these tubule segments may be anatomically distinct, the physiologic gradations are more gradual, and in terms of diuretic activity it is easier to think of this complex as a single segment of the nephron containing several distinct cell types. The collecting tubule system is responsible for only 2–5% of NaCl reabsorption by the kidney. Despite this small contribution, it plays an important role in renal physiology and in diuretic action. As the final site of NaCl reabsorption, the collecting system is responsible for tight regulation of body fluid volume and for determining the final Na+ concentra-tion of the urine. Furthermore, the collecting system is the site at which mineralocorticoids exert a significant influence. Lastly, this is the most important site of K+ secretion by the kidney and the site at which virtually all diuretic-induced changes in K+ balance occur. 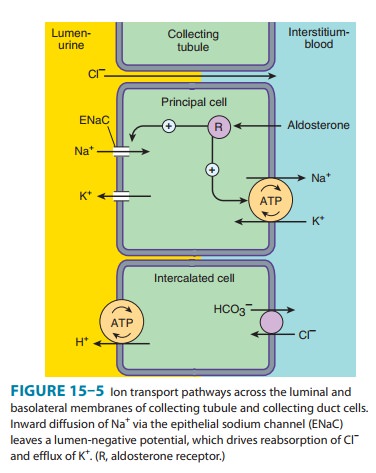 The mechanism of NaCl reabsorption in the collecting tubule system is distinct from the mechanisms found in other tubule seg-ments. The principal cells are the major sites of Na+, K+, and water transport (Figures 15–5 and 15–6), and the intercalatedcells (α,β) are the primary sites of H+(αcells) or bicarbonate (βcells) secretion. The α and β intercalated cells are very similar, except that the membrane locations of the H+-ATPase and Cl/HCO3− exchanger are reversed. Principal cells do not contain apical 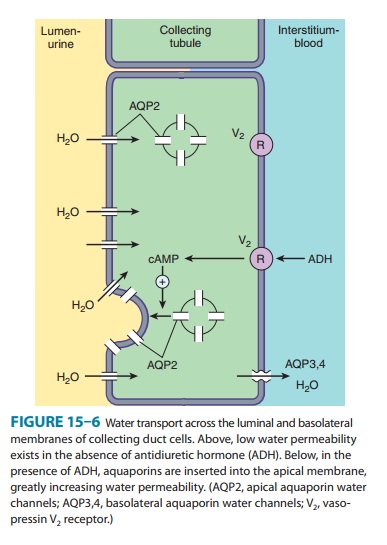 cotransport systems for Na+ and other ions, unlike cells in other nephron segments. Principal cell membranes exhibit separate ion channels for Na+ and K+. Since these channels exclude anions, transport of Na+ or K+ leads to a net movement of charge across the membrane. Because Na+ entry into the principal cell pre-dominates over K+ secretion into the lumen, a 10–50 mV lumen-negative electrical potential develops. Sodium that enters the principal cell from the tubular fluid is then transported back to the blood via the basolateral Na+/K+-ATPase (Figure 15–5). The 10–50 mV lumen-negative electrical potential drives the transport of Cl− back to the blood via the paracellular pathway and draws K+ out of cells through the apical membrane K+ channel. Thus, there is an important relationship between Na+ delivery to the collecting tubule system and the resulting secretion of K +. Upstream diuretics increase Na+ delivery to this site and enhance K+ secretion. If Na+ is delivered to the collecting system with an anion that cannot be reabsorbed as readily as Cl− (eg, HCO3−), the lumen-negative potential is increased, and K+ secretion is enhanced. This mechanism, combined with enhanced aldosterone secretion due to volume depletion, is the basis for most diuretic-induced K+ wasting. Adenosine antagonists, which act upstream at the proximal tubule, but also at the collecting duct, are perhaps the only diuretics that violate this principle . Reabsorption of Na+ via the epithelial Na channel (ENaC) and its coupled secretion of K+is regulated by aldosterone. This steroid hormone, through its actions on gene transcription, increases the activity of both apical mem-brane channels and the basolateral Na+/K+-ATPase. This leads to an increase in the transepithelial electrical potential and a dramatic increase in both Na+ reabsorption and K+ secretion.

The collecting tubule system is also the site at which the final urine concentration is determined. In addition to their role in con-trol of Na+ absorption and K+ secretion (Figure 15–5), principal cells also contain a regulated system of water channels (Figure 15–6). Antidiuretic hormone (ADH, also called arginine vasopres-sin, AVP) controls the permeability of these cells to water by regulat-ing the insertion of pre-formed water channels (aquaporin-2, AQP2) into the apical membrane. Vasopressin receptors in the vas-culature and central nervous system (CNS) are V1 receptors, and those in the kidney are V2 receptors. V2 receptors act via a G pro-tein-coupled, cAMP-mediated process. In the absence of ADH, the collecting tubule (and duct) is impermeable to water, and dilute urine is produced. ADH markedly increases water permeability, and this leads to the formation of a more concentrated final urine. ADH also stimulates the insertion of urea transporter UT1 molecules into the apical membranes of collecting duct cells in the medulla.

Urea concentration in the medulla plays an important role maintaining the high osmolarity of the medulla and in the con-centration of urine. ADH secretion is regulated by serum osmola-lity and by volume status. A new class of drugs, the vaptans (see under Agents That Alter Water Excretion), are ADH antagonists. 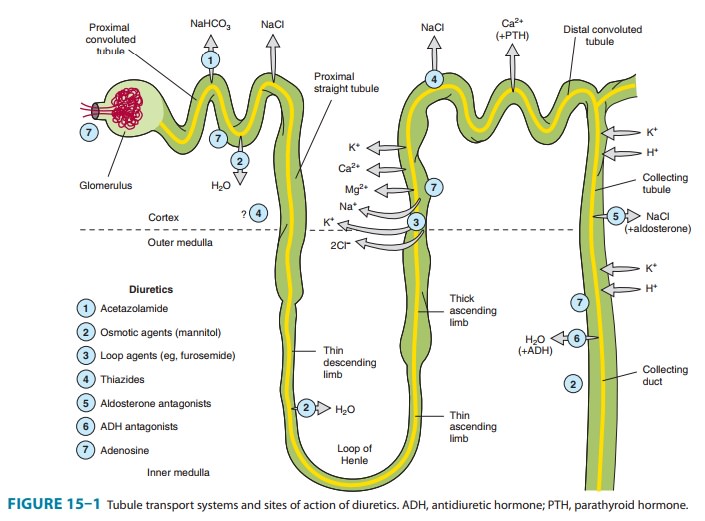