The proximal tubule and descending limb of Henle’s loop are freely permeable to water.

The proximal tubule and descending limb of Henle’s loop are freely permeable to water (Table 15–1). Any osmotically active agent that is filtered by the glomerulus but not reabsorbed causes water to be retained in these segments and promotes a water diure-sis. Such agents can be used to reduce intracranial pressure and to promote prompt removal of renal toxins. The prototypic osmotic diuretic is mannitol. Glucose is not used clinically as a diuretic but frequently causes osmotic diuresis (glycosuria) in patients with hyperglycemia. 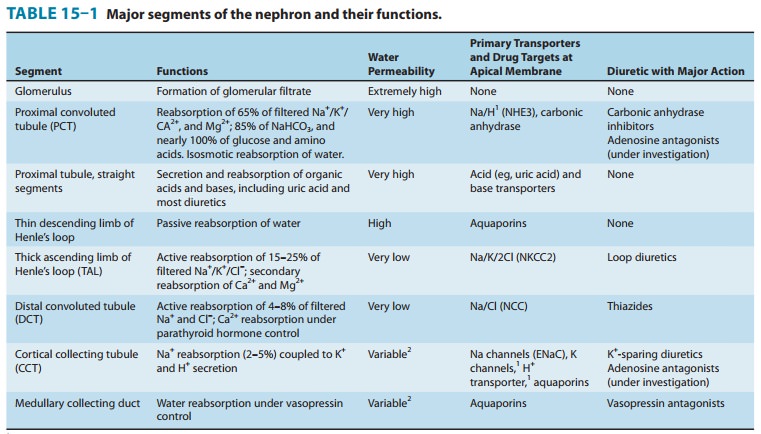 Mannitol is poorly absorbed by the GI tract, and when adminis-tered orally, it causes osmotic diarrhea rather than diuresis. For systemic effect, mannitol must be given intravenously. Mannitol is not metabolized and is excreted by glomerular filtration within 30–60 minutes, without any important tubular reabsorption or secretion. It must be used cautiously in patients with even mild renal insufficiency .

Osmotic diuretics have their major effect in the proximal tubule and the descending limb of Henle’s loop. Through osmotic effects, they also oppose the action of ADH in the collecting tubule. The presence of a nonreabsorbable solute such as mannitol prevents the normal absorption of water by interposing a countervailing osmotic force. As a result, urine volume increases. The increase in urine flow rate decreases the contact time between fluid and the tubular epithelium, thus reducing Na+ as well as water reabsorp-tion. The resulting natriuresis is of lesser magnitude than the water diuresis, leading eventually to excessive water loss and hypernatremia.

A. Increase of Urine Volume

Osmotic diuretics are used to increase water excretion in prefer-ence to sodium excretion. This effect can be useful when avid Na+ retention limits the response to conventional agents. It can be used to maintain urine volume and to prevent anuria that might other-wise result from presentation of large pigment loads to the kidney (eg, from hemolysis or rhabdomyolysis). Some oliguric patients do not respond to osmotic diuretics. Therefore, a test dose of mannitol (12.5 g intravenously) should be given before starting a continu-ous infusion. Mannitol should not be continued unless there is an increase in urine flow rate to more than 50 mL/h during the 3 hours after the test dose. Mannitol (12.5–25 g intravenously) can be repeated every 1–2 hours to maintain urine flow rate greater than 100 mL/h. Prolonged use of mannitol is not advised.

B. Reduction of Intracranial and Intraocular Pressure

Osmotic diuretics alter Starling forces so that water leaves cells and reduces intracellular volume. This effect is used to reduce intrac-ranial pressure in neurologic conditions and to reduce intraocular pressure before ophthalmologic procedures. A dose of 1–2 g/kg mannitol is administered intravenously. Intracranial pressure, which must be monitored, should fall in 60–90 minutes.

Mannitol is rapidly distributed in the extracellular compartment and extracts water from cells. Prior to the diuresis, this leads to expansion of the extracellular volume and hyponatremia. This effect can complicate heart failure and may produce florid pulmo-nary edema. Headache, nausea, and vomiting are commonly observed in patients treated with osmotic diuretics.

B. Dehydration, Hyperkalemia, and Hypernatremia

Excessive use of mannitol without adequate water replacement can ultimately lead to severe dehydration, free water losses, and hyper-natremia. As water is extracted from cells, intracellular K+ concen-tration rises, leading to cellular losses and hyperkalemia. These complications can be avoided by careful attention to serum ion composition and fluid balance.

When used in patients with severe renal impairment, parenterally administered mannitol cannot be excreted and is retained intrave-nously. This causes osmotic extraction of water from cells, leading to hyponatremia.

Vasopressin and desmopressin are used in the treatment of cen-tral diabetes insipidus. Their renal action appears to be mediated primarily via V2 ADH recep-tors, although V1a receptors may also be involved.

Until recently, two nonselective agents, lithium and demeclocycline, were used for their well-known interfer-ence with ADH activity. The mechanism for this interference has not been completely determined for either of these agents. Demeclocycline is used more often than lithium because of the many side effects of lithium administration. However, demeclocy-cline is now being rapidly replaced by several specific ADH recep-tor antagonists (vaptans), which have yielded encouraging clinical results.

There are three known vasopressin receptors,V1a, V1b, and V2. V1 receptors are expressed in the vasculature and CNS, while V2 recep-tors are expressed specifically in the kidney. Conivaptan (currently available only for intravenous use) exhibits activity against both V1a and V2 receptors . The oral agentstolvaptan, lixivaptan, and satavaptan are selectively active against the V2 receptor. Lixivaptan and satavaptan are still under clinical investigation, but tolvaptan, which recently received Food and Drug Administration approval, is very effective in treatment of hyponatremia and as an adjunct to standard diuretic therapy in patients with CHF.

The half-life of conivaptan and demeclocycline is 5–10 hours, while that of tolvaptan is 12–24 hours.

Antidiuretic hormone antagonists inhibit the effects of ADH in the collecting tubule. Conivaptan and tolvaptan are direct ADH receptor antagonists, while both lithium and demeclocycline reduce ADH-induced cAMP by mechanisms that are not yet com-pletely clarified.

A. Syndrome of Inappropriate ADH Secretion

Antidiuretic hormone antagonists are used to manage SIADH when water restriction has failed to correct the abnormality. This generally occurs in the outpatient setting, where water restriction cannot be enforced, but can occur in the hospital when large quantities of intravenous fluid are needed for other purposes. Demeclocycline (600–1200 mg/d) or tolvaptan (15–60 mg/d) can be used for SIADH. Appropriate plasma levels of demeclocycline (2 mcg/mL) should be maintained by monitoring, but tolvaptan levels are not routinely monitored. Unlike demeclocycline or tolvaptan, conivaptan is administered intravenously and is not suitable for chronic use in outpatients. Lixivaptan and satavaptan may also soon be available for oral use.

B. Other Causes of Elevated Antidiuretic Hormone

Antidiuretic hormone is also elevated in response to diminished effec-tive circulating blood volume, as often occurs in heart failure. When treatment by volume replacement is not desirable, hyponatremia may result. As for SIADH, water restriction is often the treatment of choice. In patients with heart failure, this approach is often unsuccess-ful in view of increased thirst and the large number of oral medica-tions being used. For patients with heart failure, intravenous conivaptan may be particularly useful because it has been found that the blockade of V1a receptors by this drug leads to decreased periph-eral vascular resistance and increased cardiac output.

If serum Na+ is not monitored closely, any ADH antagonist can cause severe hypernatremia and nephrogenic diabetes insipidus. If lithium is being used for a psychiatric disorder, nephrogenic dia-betes insipidus can be treated with a thiazide diuretic or amiloride (see Diabetes Insipidus, below).

Both lithium and demeclocycline have been reported to cause acute renal failure. Long-term lithium therapy may also cause chronic interstitial nephritis.

Dry mouth and thirst are common with many of these drugs. Tolvaptan may cause hypotension. Demeclocycline should be avoided in patients with liver disease  and in children younger than 12 years.