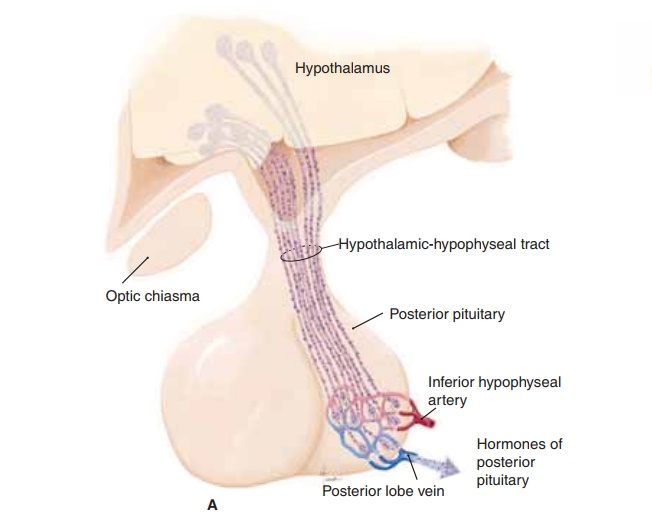 Antidiuretic hormone (ADH, also called vaso-pressin) increases the reabsorption of water by kidney tubules, which decreases the amount of urine formed. The water is reabsorbed into the blood, so as urinary output is decreased, blood volume is increased, which helps maintain normal blood pressure. ADH also decreases sweating, but the amount of water con-served is much less than that conserved by the kidneys.

The stimulus for secretion of ADH is decreased water content of the body. If too much water is lost through sweating or diarrhea, for example, osmore-ceptors in the hypothalamus detect the increased “saltiness” of body fluids. The hypothalamus then transmits impulses to the posterior pituitary to increase the secretion of ADH and decrease the loss of more water in urine.

Any type of dehydration stimulates the secretion of ADH to conserve body water. In the case of severe hemorrhage, ADH is released in large amounts and will also cause vasoconstriction, especially in arteri-oles, which will help to raise or at least maintain blood pressure. This function gives ADH its other name, vasopressin.

Ingestion of alcohol inhibits the secretion of ADH and increases urinary output. If alcohol intake is exces-sive and fluid is not replaced, a person will feel thirsty and dizzy the next morning. The thirst is due to the loss of body water, and the dizziness is the result of low blood pressure.

Oxytocin stimulates contraction of the uterus at the end of pregnancy and stimulates release of milk from the mammary glands.

As labor begins, the cervix of the uterus is stretched, which generates sensory impulses to the hypothalamus, which in turn stimulates the posterior pituitary to release oxytocin. Oxytocin then causes strong contractions of the smooth muscle (myo-metrium) of the uterus to bring about delivery of the baby and the placenta. The secretion of oxytocin is one of the few positive feedback mechanisms within the body, and the external brake or shutoff of the feedback cycle is delivery of the baby and the placenta.

It has been discovered that the placenta itself secretes oxytocin at the end of gestation and in an amount far higher than that from the posterior pitu-itary gland. Research is continuing to determine the exact mechanism and precise role of the placenta in labor.

When a baby is breast-fed, the sucking of the baby stimulates sensory impulses from the mother’s nipple to the hypothalamus. Nerve impulses from the hypo-thalamus to the posterior pituitary cause the release of oxytocin, which stimulates contraction of the smooth muscle cells around the mammary ducts. This release of milk is sometimes called the “milk let-down” reflex. The hormones of the posterior pituitary are summa-rized in Table 10–1.

Both ADH and oxytocin are peptide hormones with similar structure, having nine amino acids each. And both have been found to influence aspects of behavior such as nurturing and trustfulness. Certain brain cells have receptors for vasopressin, and they seem to be involved in creating the bonds that sustain family life. Trust is part of many social encounters such as friendship, school, sports and games, and buy-ing and selling, as well as family life. These two small hormones seem to have some influence on us mentally as well as physically.