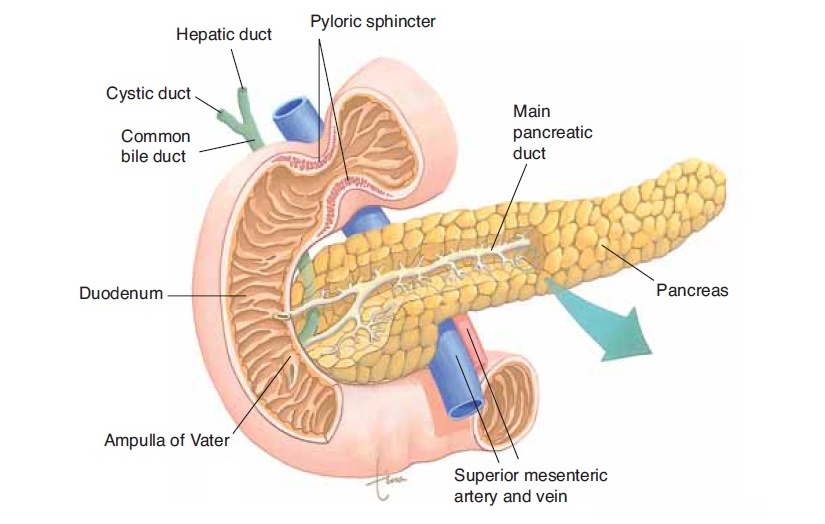 The pancreas is located in the upper left quadrant of the abdominal cavity, extending from the curve of the duodenum to the spleen.

The pancreas is located in the upper left quadrant of the abdominal cavity, extending from the curve of the duodenum to the spleen. Although the pancreas is both an exocrine (digestive) gland as well as an endocrine gland, only its endocrine function will be discussed here. The hormone-producing cells of the pancreas are called islets of Langerhans (pancreatic islets; see Fig. 16–7); they contain alpha cells that produce glucagon and beta cells that produce insulin. 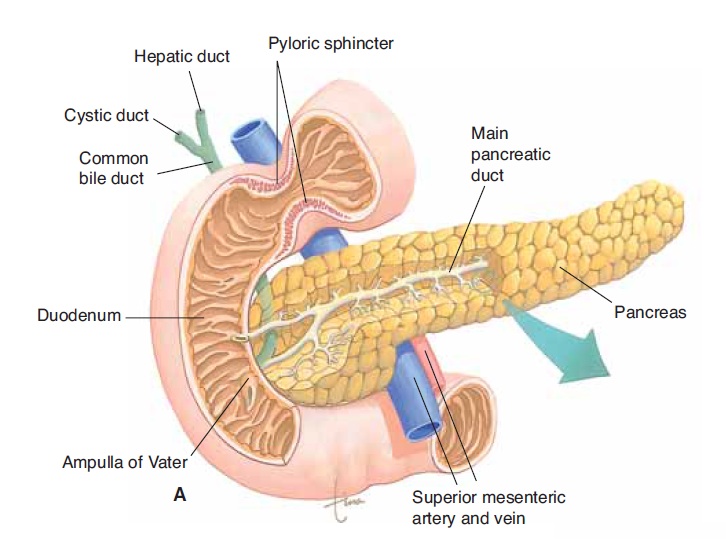 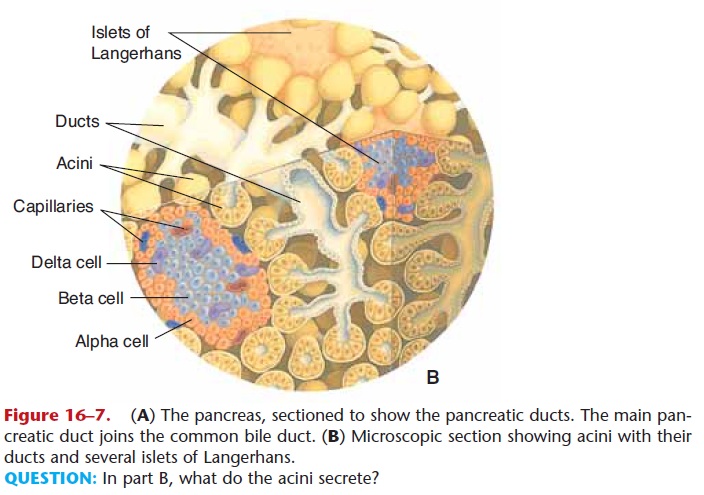 Glucagon stimulates the liver to change glycogen to glucose (this process is called glycogenolysis, which literally means “glycogen breakdown”) and to increase the use of fats and excess amino acids for energy pro-duction. The process of gluconeogenesis (literally, “making new glucose”) is the conversion of excess amino acids into simple carbohydrates that may enter the reactions of cell respiration. The overall effect of glucagon, therefore, is to raise the blood glucose level and to make all types of food available for energy production.

The secretion of glucagon is stimulated by hypo-glycemia, a low blood glucose level. Such a state may occur between meals or during physiological stress sit-uations such as exercise (Fig. 10–8). 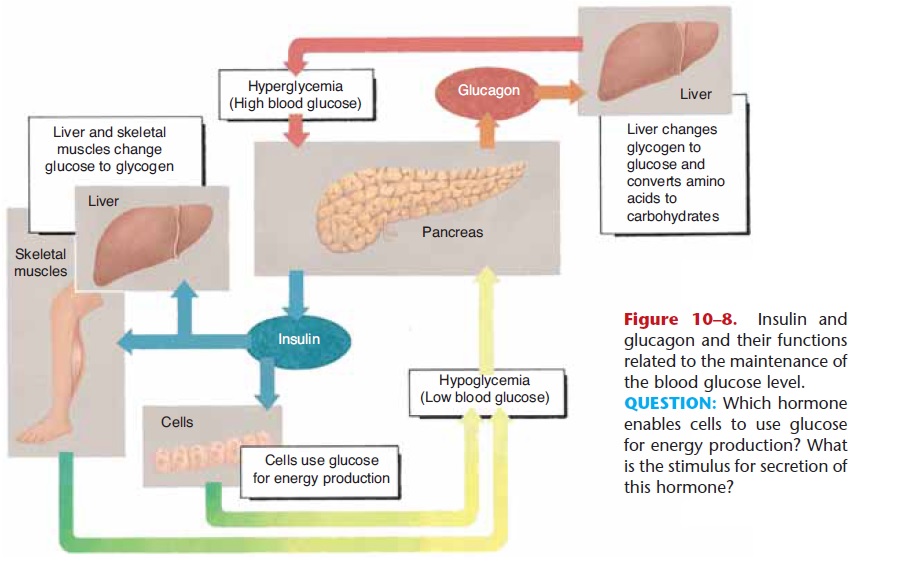 Figure 10–8. Insulin and glucagon and their functions related to the maintenance of the blood glucose level.

QUESTION: Which hormone enables cells to use glucose for energy production? What is the stimulus for secretion of this hormone?

Insulin increases the transport of glucose from the blood into cells by increasing the permeability of cell membranes to glucose. (Brain, liver, and kidney cells, however, are not dependent on insulin for glucose intake.) Once inside cells, glucose is used in cell respiration to produce energy.

The liver and skele-tal muscles also change glucose to glycogen (glycoge-nesis, which means “glycogen production”) to be stored for later use. Insulin is also important in the metabolism of other food types; it enables cells to take in fatty acids and amino acids to use in the synthesis of lipids and proteins (not energy production). Without insulin, blood levels of lipids tend to rise and cells accu-mulate excess fatty acids. With respect to blood glu-cose, insulin decreases its level by promoting the use of glucose for energy production. The antagonistic func-tions of insulin and glucagon are shown in Fig. 10–8.

Insulin is a vital hormone; we cannot survive for very long without it. A deficiency of insulin or in its functioning is called diabetes mellitus.

Secretion of insulin is stimulated by hyper-glycemia, a high blood glucose level. This state occurs after eating, especially of meals high in carbo-hydrates. As glucose is absorbed from the small intes-tine into the blood, insulin is secreted to enable cells to use the glucose for immediate energy. At the same time, any excess glucose will be stored in the liver and muscles as glycogen.

You will also notice in Fig. 16–7 the cells called delta cells. These produce the hormone somatostatin, which is identical to growth hormone–inhibiting hor-mone from the hypothalamus. Pancreatic somato-statin acts locally to inhibit the secretion of insulin and glucagon, and it seems to slow the absorption of the end products of digestion in the small intestine. The hormones of the pancreas are summarized in Table 10–5.