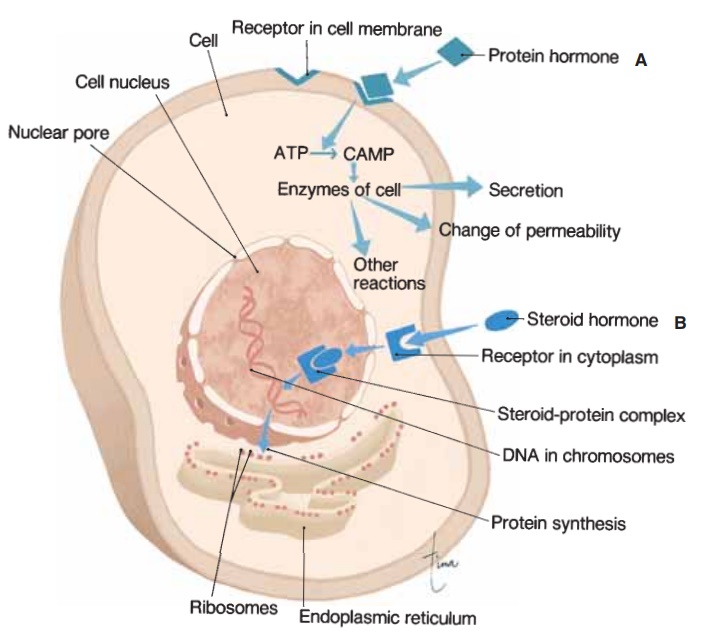 Exactly how hormones exert their effects on their tar-get organs involves a number of complex processes, which will be presented simply here A hormone must first bond to a receptor for it on or in the target cell.

Exactly how hormones exert their effects on their tar-get organs involves a number of complex processes, which will be presented simply here A hormone must first bond to a receptor for it on or in the target cell. Cells respond to certain hor-mones and not to others because of the presence of specific receptors, which are proteins. These receptor proteins may be part of the cell membrane or within the cytoplasm or nucleus of the target cells. A hor-mone will affect only those cells that have its specific receptors. Liver cells, for example, have cell mem-brane receptors for insulin, glucagon, growth hor-mone, and epinephrine; bone cells have receptors for growth hormone, PTH, and calcitonin. Cells of the ovaries and testes do not have receptors for PTH and calcitonin, but do have receptors for FSH and LH, which bone cells and liver cells do not have. Once a hormone has bonded to a receptor on or in its target cell, other reactions will take place.

The two-messenger mechanism of hormone action involves “messengers” that make something happen, that is, stimulate specific reactions. Protein hor-mones usually bond to receptors of the cell mem-brane, and the hormone is called the first messenger. The hormone–receptor bonding activates the enzyme adenyl cyclase on the inner surface of the cell mem-brane. Adenyl cyclase synthesizes a substance called cyclic adenosine monophosphate (cyclic AMP or cAMP) from ATP, and cyclic AMP is the second mes-senger.

Cyclic AMP activates specific enzymes within the cell, which bring about the cell’s characteristic response to the hormone. These responses include a change in the permeability of the cell membrane to a specific substance, an increase in protein synthesis, activation of other enzymes, or the secretion of a cel-lular product.

In summary, a cell’s response to a hormone is deter-mined by the enzymes within the cell, that is, the reac-tions of which the cell is capable. These reactions are brought about by the first messenger, the hormone, which stimulates the formation of the second messen-ger, cyclic AMP. Cyclic AMP then activates the cell’s enzymes to elicit a response to the hormone (Fig. 10–12). 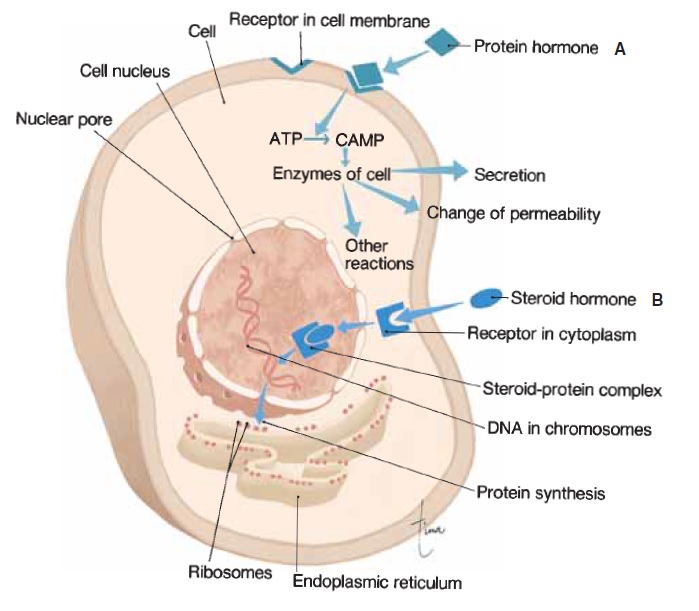 Figure 10–12. Mechanisms of hormone action. (A) Two- messenger mechanism of the action of protein hormones. (B) Action of steroid hormones. See text for description.

QUESTION: What must a cell have in order to be a target cell for a particular hormone?

Steroid hormones are soluble in the lipids of the cell membrane and diffuse easily into a target cell. Once inside the cell, the steroid hormone combines with a protein receptor in the cytoplasm, and this steroid-protein complex enters the nucleus of the cell. Within the nucleus, the steroid-protein complex activates spe-cific genes, which begin the process of protein syn-thesis. The enzymes produced bring about the cell’s characteristic response to the hormone (see Fig. 10–12).