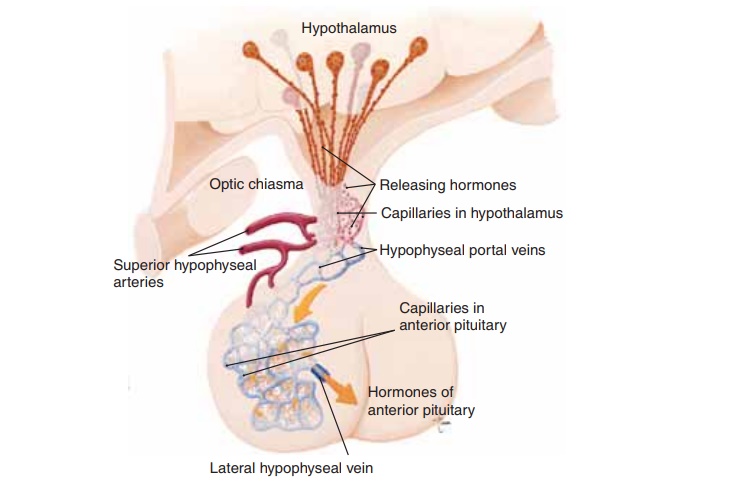 The hormones of the anterior pituitary gland regulate many body functions. 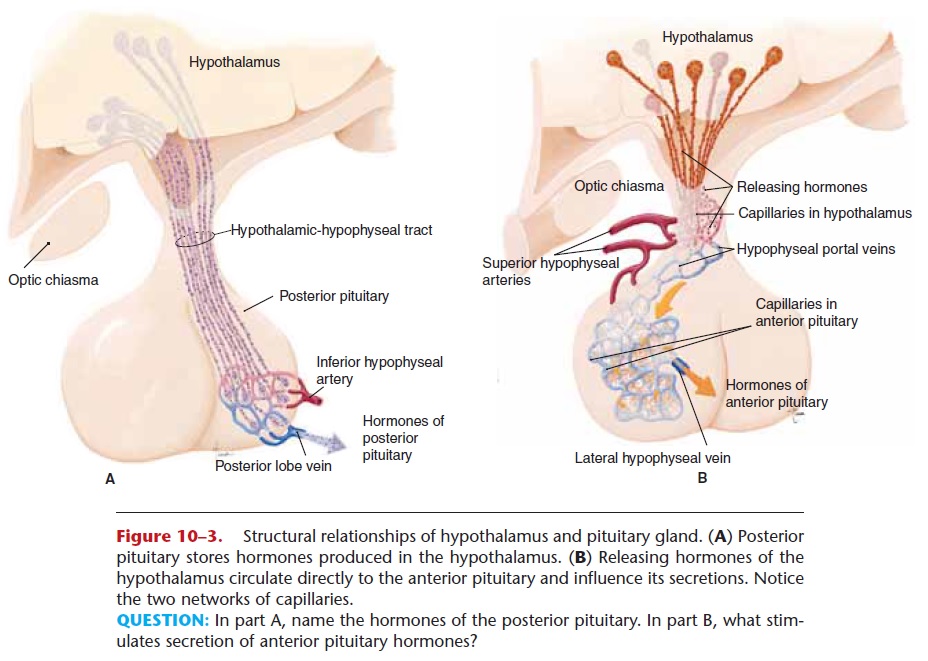 Growth hormone (GH) is also called somatotropin, and it does indeed promote growth (see Fig. 10–4). GH stimulates cells to produce insulin-like growth fac-tors (IGFs), intermediary molecules that bring about the functions of GH. Growth hormone increases the transport of amino acids into cells, and increases the rate of protein synthesis. Amino acids cannot be stored in the body, so when they are available, they must be 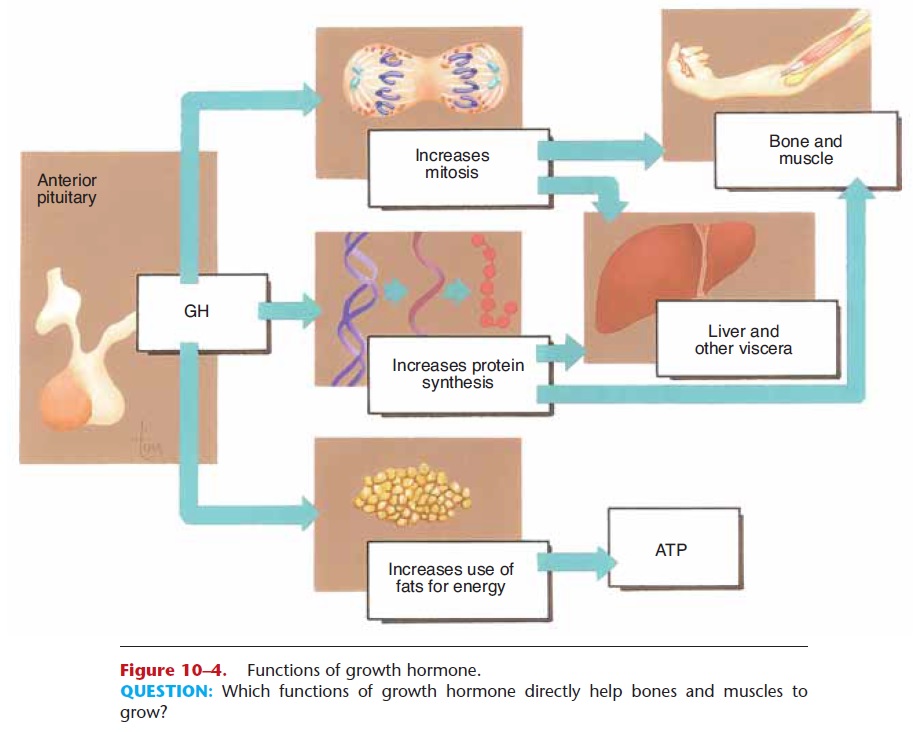 QUESTION: Which functions of growth hormone directly help bones and muscles to grow?

used in protein synthesis. Excess amino acids are changed to carbohydrates or fat, for energy storage. Growth hormone ensures that amino acids will be used for whatever protein synthesis is necessary, before the amino acids can be changed to carbohydrates. Growth hormone also stimulates cell division in those tissues capable of mitosis. These functions contribute to the growth of the body during childhood, especially growth of bones and muscles.

You may now be wondering if GH is secreted in adults, and the answer is yes. The use of amino acids for the synthesis of proteins is still necessary. Even if the body is not growing in height, some tissues will require new proteins for repair or replacement. GH also stimulates the release of fat from adipose tissue and the use of fats for energy production. This is important any time we go for extended periods with-out eating, no matter what our ages.

The secretion of GH is regulated by two releasing hormones from the hypothalamus. Growth hormone– releasing hormone (GHRH), which increases the secretion of GH, is produced during hypoglycemia and during exercise. Another stimulus for GHRH is a high blood level of amino acids; the GH then secreted will ensure the conversion of these amino acids into protein. Somatostatin may also be called growth hor-mone inhibiting hormone (GHIH), and, as its name tells us, it decreases the secretion of GH. Somatostatin is produced during hyperglycemia.

Thyroid-stimulating hormone (TSH) is also called thyrotropin, and its target organ is the thyroid gland. TSH stimulates the normal growth of the thyroid and the secretion of thyroxine (T4) and triiodothyronine (T3).

The secretion of TSH is stimulated by thyrotropin-releasing hormone (TRH) from the hypothalamus. When metabolic rate (energy production) decreases, TRH is produced.

Adrenocorticotropic hormone (ACTH) stimulates the secretion of cortisol and other hormones by the adrenal cortex. Secretion of ACTH is increased by corticotropin-releasing hormone (CRH) from the hypothalamus. CRH is produced in any type of phys-iological stress situation such as injury, disease, exer-cise, or hypoglycemia (being hungry is stressful).

Prolactin, as its name suggests, is responsible for lac-tation. More precisely, prolactin initiates and main-tains milk production by the mammary glands. The regulation of secretion of prolactin is complex, involv-ing both prolactin-releasing hormone (PRH) and prolactin-inhibiting hormone (PIH) from the hypo-thalamus. The mammary glands must first be acted upon by other hormones such as estrogen and proges- terone, which are secreted in large amounts by the placenta during pregnancy. Then, after delivery of the baby, prolactin secretion increases and milk is pro-duced. If the mother continues to breast-feed, pro-lactin levels remain high.

Follicle-stimulating hormone (FSH) is one of the gonadotropic hormones; that is, it has its effects on the gonads: the ovaries or testes. FSH is named for one of its functions in women. Within the ovaries are ovarian follicles that contain potential ova (egg cells). FSH stimulates the growth of ovarian follicles; that is, it initiates egg development in cycles of approximately 28 days. FSH also stimulates secretion of estrogen by the follicle cells. In men, FSH initiates sperm produc-tion within the testes.

The secretion of FSH is stimulated by the hypo-thalamus, which produces gonadotropin-releasing hormone (GnRH). FSH secretion is decreased by inhibin, a hormone produced by the ovaries or testes.

Luteinizing hormone (LH) is another gonadotropic hormone. In women, LH is responsible for ovulation, the release of a mature ovum from an ovarian follicle. LH then stimulates that follicle to develop into the corpus luteum, which secretes progesterone, also under the influence of LH. In men, LH stimulates the interstitial cells of the testes to secrete testosterone.

Secretion of LH is also regulated by GnRH from the hypothalamus. We will return to FSH and LH.

The hormones of the anterior pituitary are summa-rized in Table 10–2. 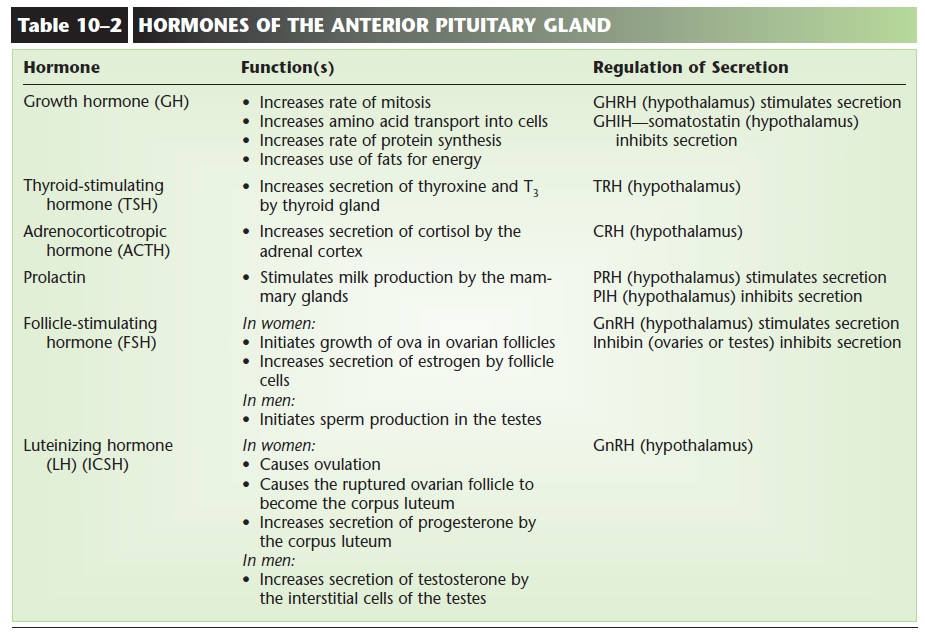