• Mirror is an optical device with a polished surface that reflects the light falling on it.

• Curved mirrors have surfaces that are spherical, cylindrical, parabolic and ellipsoid.

• If the curved mirror is a part of a sphere, then it is called a ‘spherical mirror’.

• A spherical mirror, in which the reflection of light occurs at its concave surface, is called a concave mirror.

• A spherical mirror, in which the reflection of light occurs at its convex surface, is called a convex mirror.

• The focal length of a spherical mirror is half of its radius of curvature.

• Concave mirrors form a real image and it can be caught on a screen.

• Convex mirrors are used in vehicles as rearview mirrors.

• The number of images formed by a mirror depends on the angle of inclination of the mirrors.

1. Center of Curvature The center of the sphere from which the mirror is made.

2. Dispersion of light Splitting of white light into its seven constituent colours (wavelength).

3. Focal length Distance between the pole and the principal focus.

4. Focus Point where the reflected rays converge at or appear to diverge from a pointon the principal axis.

6. Periscope Instrument used for viewing objects, which are over and around another body.

7. Pole Point on the mirror’s surface where the principal axis meets the mirror.

8. Principal Axis Line joining the pole of the mirror and its center of curvature.

9. Radius of Curvature Distance between the center of the sphere and the vertex.

10. Reflection Bouncing back of the light rays as they fall on the smooth, shiny and polished surface.

11. Refraction of light Bending of light about the normal, at the point of incidence; as it passes from one transparent medium to another. 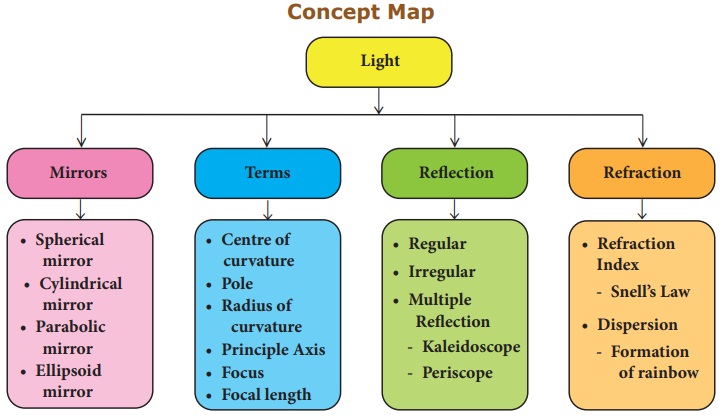