We use mirrors in our daily life for various purposes. Mainly, we use them for beautifying us.

We use mirrors in our daily life for various purposes. Mainly, we use them for beautifying us. The mirror is an optical device with a polished surface that reflects the light falling on it. A typical mirror is a glass sheet coated with aluminium or silver on one of its sides to produce an image. Mirrors have a plane or curved surface. Curved mirrors have surfaces that are spherical, cylindrical, parabolic and ellipsoid. The shape of a mirror determines the type of image it forms. Plane mirrors form the perfect image of an object. Whereas, curved mirrors produce images that are either enlarged or diminished.

Method of coating a glass platewith a thin layer of reflecting metals was in practice during the 16th century in Venice, Italy. They used an amalgam of tin and mercury for this purpose. Nowadays, a thin layer of molten aluminium or silver is used for coating glass plates that will then become mirrors.

Spherical mirrors are one form of curved mirrors. If the curved mirror is a part of a sphere, then it is called a ‘spherical mirror’. It resembles the shape of a piece cut out from a spherical surface. One side of this mirror is silvered and the reflection of light occurs at the other side. 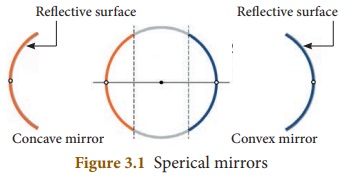 A spherical mirror, in which the reflection of light occurs at its concave surface, is called a concave mirror. These mirrors magnify the object placed close to them. The most common example of a concave mirror is the make-up mirror.

A spherical mirror, in which the reflection of light occurs at its convex surface, is called a convex mirror. The image formed by these mirrors is smaller than the object. Most common convex mirrors are rear viewing mirrors used in vehicles.

Convex mirrors used invehicles as rear-view mirrorsare labeled with the safety warning: ‘Objects in the mirror are closer than they appear’. This is because inside the mirrors, vehicles will appear to becoming at a long distance.

A parabolic mirror, which is in the shape of a parabola, is one type of curved mirror. It has a concave reflecting surface and this surface directs the entire incident beam of light to converge at its focal point.

In the same way, light rays generated by the source placed at the focal point will fall on this surface and they will be diverged in a direction, which is parallel to the principal axis of the parabolic mirror. Hence, the light rays will be reflected to travel a long distance, without getting diminished. 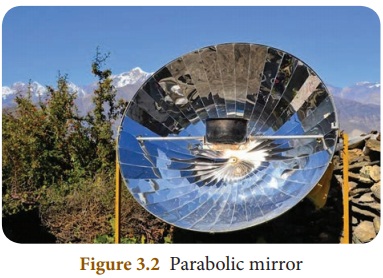 The principle behind the working of a parabolic mirror has been known since the Greco-Roman times. The first mention of these structures was found in the book, ‘On Burning Mirrors’, written by the mathematician Diocles. They were also studied in the 10th century, by a physicist called Ibn Sahl. The first parabolic mirrors were constructed by Heinrich Hertz, a German physicist, in the form of reflector antennae in the year 1888.