Concave mirrors are used while applying make-up or shaving, as they provide a magnified image.

1. Concave mirrors are used while applying make-up or shaving, as they provide a magnified image.

2. They are used in torches, search lights and head lights as they direct the light to a long distance.

3. They can collect the light from a larger area and focus it into a small spot. Hence, they are used in solar cookers.

4. They are used as head mirrors by doctors to examine the eye, ear, nose and throat as they provide a shadow-free illumination of the organ.

5. They are also used in reflecting telescopes. 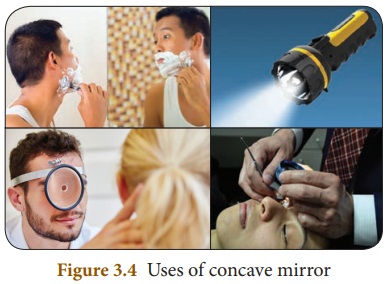 1. Convex mirrors are used in vehicles as rear view mirrors because they give an upright image and provide a wider field of view as they are curved outwards.

2. They are found in the hallways of various buildings including hospitals, hotels, schoolsand stores. They are usually mounted on a wall or ceiling where hallways make sharp turns.

3. They are also used on roads where there are sharp curves and turns.

(i) It is used as torch to reflect the light.

(ii) It is used in the aircraft landing at the airports to guide the aeroplanes.

(iii) In shaving mirrors to get an enlarged and erect image of face.

(iv) In front light of cars.

(v) In marine lighthouses to guide the ships and

(i) Used as side - view mirror of a car as it forms an erect and smaller image.

(ii) Suitable for convenient shop and big supermarket any other comer where need anti - thief.

(iii) In the turning off the road and parking.

(iv) In making lenses of sunglasses.

(v) In securities and used in telescopes.

(vi) Used as street light reflectors because they can spread the light over a bigger area.