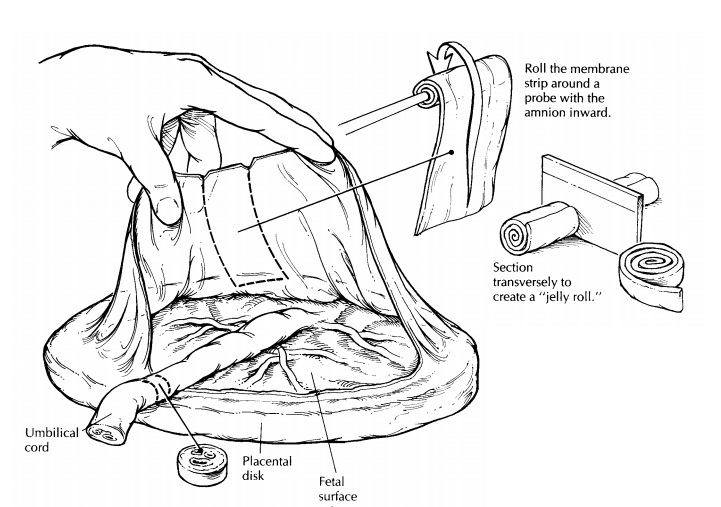 Placentas are submitted for evaluation because of maternal conditions, fetal/neonatalcondi-tions, or gross anomalies of the placenta and in all multiple gestations.

Placentas are submitted for evaluation because of maternal conditions, fetal/neonatalcondi-tions, or gross anomalies of the placenta and in all multiple gestations. Many abnormalities can be recognized with a thorough gross examina-tion. Approach each placenta by systematically evaluating the three main components: the fetal membranes, the umbilical cord, and the placen-tal disk.

Placentas should initially be examined in the fresh, unfixed state. Choose a work area that allows for the drainage of blood and fluid, which is copiously expressed from the placental bed on sectioning. Always be aware of the clinical his-tory before proceeding, and check the contents of the container in which the placenta was received for any separate blood clots. Orient the placenta by placing the spongy, red maternal surface face down and the shiny, membranous fetal surface with umbilical cord face up. Invert the mem-branes, if necessary, so that they are draped around the fetal surface.

Begin your examination with the fetal mem-branes, noting their color, lucency, and insertion. Normal membranes should be shiny and clear and should insert at the edge of the placental disk. Look for any opacities, which may indicate inflammation; small white nodules, which indi-cate amnion nodosum; and meconium staining, which may indicate intrauterine fetal hypoxia. As illustrated, membrane insertion within the cir-cumference of the fetal surface is called placentaextrachorialis and can be subdivided into either circummarginate (a smooth chorionic surface at the insertion) or circumvallate (a grooved or ridged chorionic surface at the insertion). Both may reflect previous bleeding from earlier pla-cental separation. Next, re-create the gestational sac by gently lifting the membranes, and cut a 2- to 3-cm-wide strip of membrane from the ruptured margin to the placental margin. Begin-ning at the ruptured end, roll the membrane strip with the amnion inward around a small probe. Remove the probe, and cut the newly created ‘‘membrane roll’’ transversely for histologic exam-ination. The membranes can now be removed by trimming them along the placental margin.

The umbilical cord is examined next. Record its length and site of insertion. Although the length provided may be artificially shortened if a seg-ment was removed in the delivery room, exces-sively short (less than 30 cm) or long (more than 70 cm) cords are significant because of their asso-ciation with abnormal fetal development and activity. Insertions at the edge of the placenta or in the membranes may be associated with exposed vessels, which should be examined carefully for any tears or thrombi. Remove the umbilical cord at its insertion, and examine the entire length of the cord for thinning, thrombi, or knots. True knots can be undone when the umbilical cord ends are freed, whereas false knots cannot. Make several transverse cuts along the cord, and examine the vessels. There should be two small thick-walled arteries and one large thin-walled vein. At the insertion site, many vessels join together and they may not be fused into their terminal vessel until just above this point. Also, twisted regions of the umbilical cord can give the artificial appearance of an increased number of vessels on cross section. Therefore, for an accurate documentation of the number of vessels, it is best to submit a transverse section of the umbilical cord for examination from an area that is not excessively twisted and at least 1 cm above the insertion site. 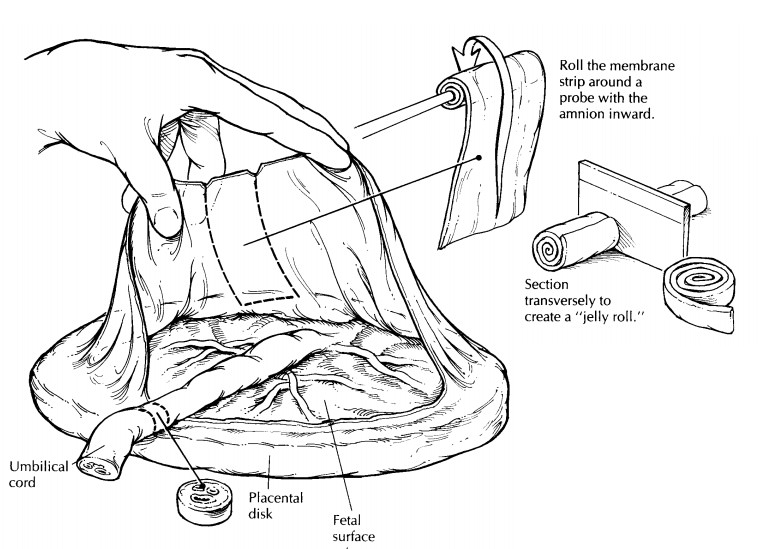 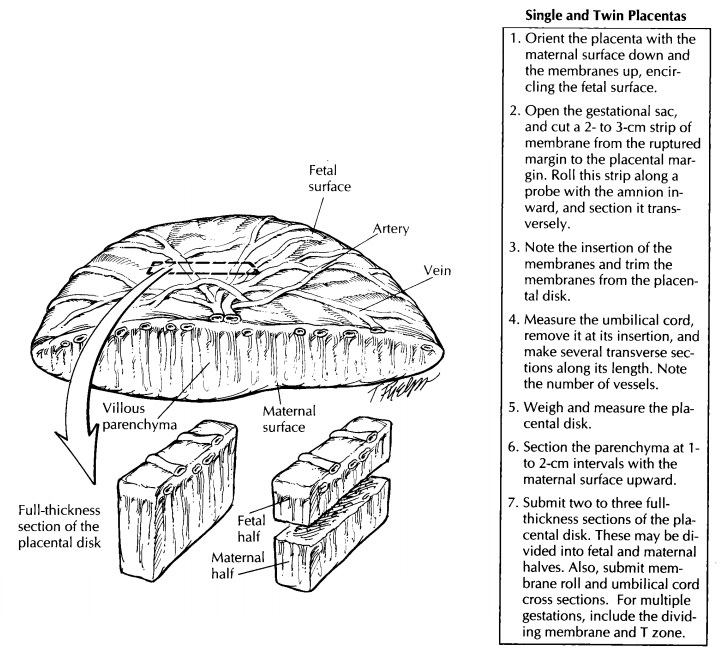 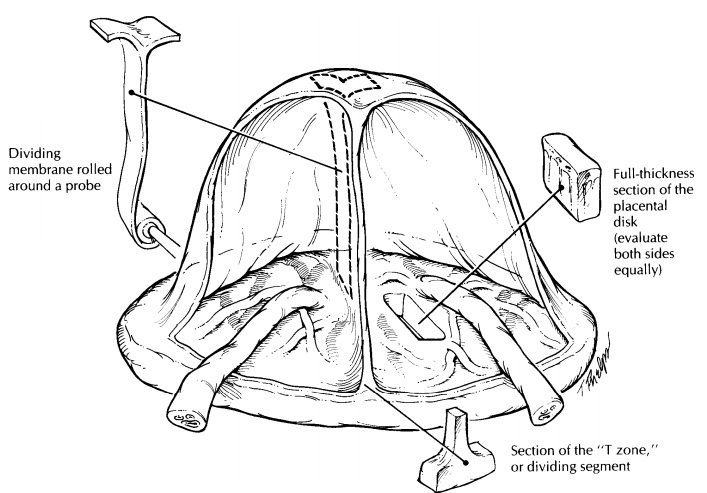 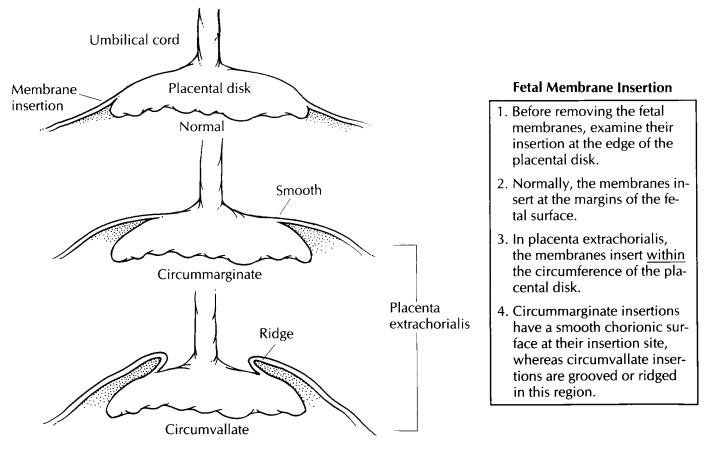 The placenta should now be a solitary disk. Record its weight and three-dimensional mea-surement. Any unusual shapes or extra lobes should be noted. Examine the membranes on the fetal surface first, and look for nodules within or just below the amnion/chorion layer. Superfi-cial white nodules or fine granularity may repre-sent amnion nodosum, whereas firm, yellowish nodules beneath the membranes may represent subchorionic fibrin deposition. If present, these be sampled for histology.

Next, exam-ine the vessels that radiate toward the umbilical cord, and look for tears or thrombi. Turn the pla-centa over, and examine the maternal surface. The cotyledons should be relatively uniform and intact. Look for any evidence of disruption or indentation of the parenchyma. Adherent clots without underlying compression do not neces-sarily signify a placental abruption. Serially sec-tion the placenta at 1- to 2-cm intervals with the maternal surface upward, and examine the pa-renchyma. The greatest thickness of the placenta from the fetal to the maternal surface should be measured. Look for infarcts, intervillous thrombi, or tumors. Both infarcts and intervil-lous thrombi can appear yellow or white. Inter-villous thrombi are usually smooth and displace the villous parenchyma, whereas infarcts involve the villous tissue and appear more granular. If an infarct is identified, be sure to specify the per-centage of parenchyma that is involved. Tumors are rare in the placenta, but hemangiomas, chorio-carcinomas, and metastatic cancers can be found.

Sections should include the full thickness of the placenta from the central regions, rather than from the margins. If the section is too thick to fit into one tissue cassette, it may be divided into maternal and fetal halves. Standard sections in-clude two central sections from different coty-ledons and any focal lesions.

Fused placentas from multiple gestations can be evaluated in a similar manner to single gestations. Additional handling includes an ex-amination of the dividing membranes and the identification of any vascular anastomoses. Di-viding membranes are composed of two outer amnions and either one or two intervening cho-rions. All monochorionic placentas come from monozygotic (identical) twins, whereas dichori-onic placentas may belong to either monozy-gotic or dizygotic (fraternal) twins. The dividing membrane can be easily peeled apart in mono-chorionic placentas. Dichorionic placentas are moreopaque and difficult to separate. Although you can perform this separation yourself, his-tologic verification is necessary, and a mem-brane roll should be submitted from a region that has not been separated. A section from the ‘‘T zone,’’ where the membranes attach to the fetal surface, may also be submitted. Look for any vascular anastomoses between the two sides. Note whether these are artery-to-artery (AA), vein-to-vein (VV), or artery-to-vein (AV). Arteries can be readily recognized by the fact that they lie on top of the veins. Abnormal anastomoses may be reflected by one side being severely con-gested and large, with the other being pale and small.

Important Issues to Address in Your Surgical Pathology Report on Placentas

·  What procedure was performed (was the placenta removed via spontaneous delivery or manually), and what structures/organs are present?

·  What is the trimester maturation of the villi (second or third trimester)?

·  Are any abnormalities of the placental shape, membrane insertion, or cord insertion present?

·  Are any anomalous vessels or vessels with thrombi present?

·  Is a normal three-vessel cord present?

·  Is there inflammation of the membranes, um-bilical cord, or chorionic villi?

·  Are the maternal cotyledons disrupted, or is there compression by hematomas?

·  Does the parenchyma show any infarction? If so, what percentage is involved?

·  Are any villous thrombi or neoplasms identi-fied in the parenchyma?

·  In twin gestations, is a dividing membrane present? If so, is it diamniotic–monochorionic or diamniotic–dichorionic?