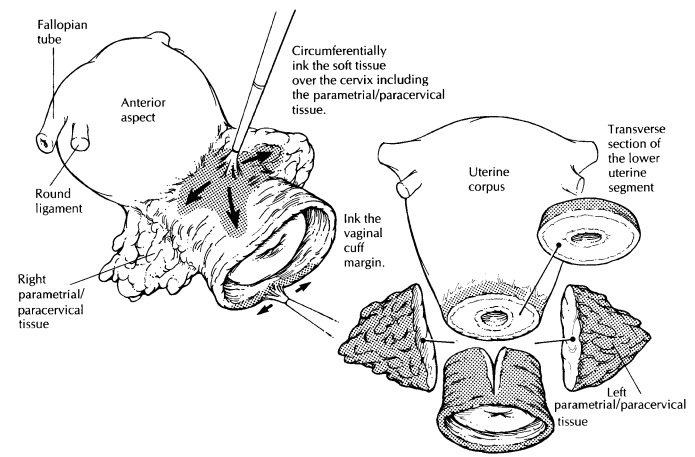 Radical hysterectomies are performed for early stage invasive squamous carcinomas and adenocarcinomas of the cervix.

Radical hysterectomies are performed for early stage invasive squamous carcinomas and adenocarcinomas of the cervix. In addition to the uterus and cervix, the specimen has attached para-metrial/paracervical soft tissue and a vaginal cuff.

Begin by orienting, measuring, and weighing the uterus and cervix as described in the section on hysterectomies for benign disease. Also, mea-sure the size of the attached parametrial/paracer-vical tissue and the length of the attached vaginal cuff. Note whether the shape of the cervix is rounded or barrel shaped. Ink the right and left parametrial/paracervical tissues, the anterior/ posterior soft tissue margins of the cervical canal, and the vaginal cuff margin. Remove the para-metrial/paracervical tissue by shaving each side close to its lateral attachment on the cervix. Sec-tion this tissue at 0.3-cm intervals, and submit the entire tissue for histologic examination. Any identifiable lymph nodes may be dissected and separately designated.

Next, amputate the cervix at the level of the internal os, and open the canal with a longitudi-nal incision opposite the tumor. Pin it open, and fix it as you would a cone biopsy. Measure the maximum tumor width and length as well as the distance to the nearest vaginal margin. Exam-ine the vaginal cuff. Unless the tumor is close to the vaginal margin, the margin may be removed with a 0.3-cm parallel shave and submitted as four designated quadrants. If the tumor closely approaches the vaginal margin, leave the vaginal cuff intact and take perpendicular margins to demonstrate the relationship of the tumor to the margin. Serially section the cervix at 0.3-cm inter-vals, and measure the maximum tumor thickness as well as the thickness of the cervical wall at that site. Occasionally, a cervical tumor may not be easily discernible as a result of prior surgery or therapy. 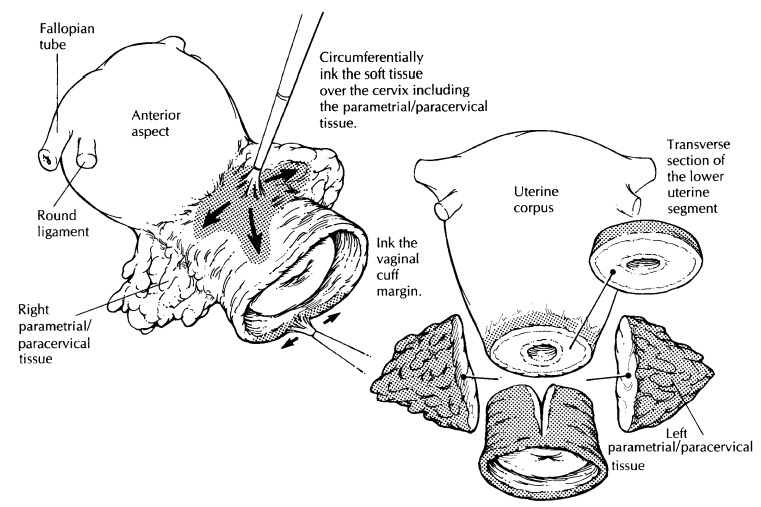 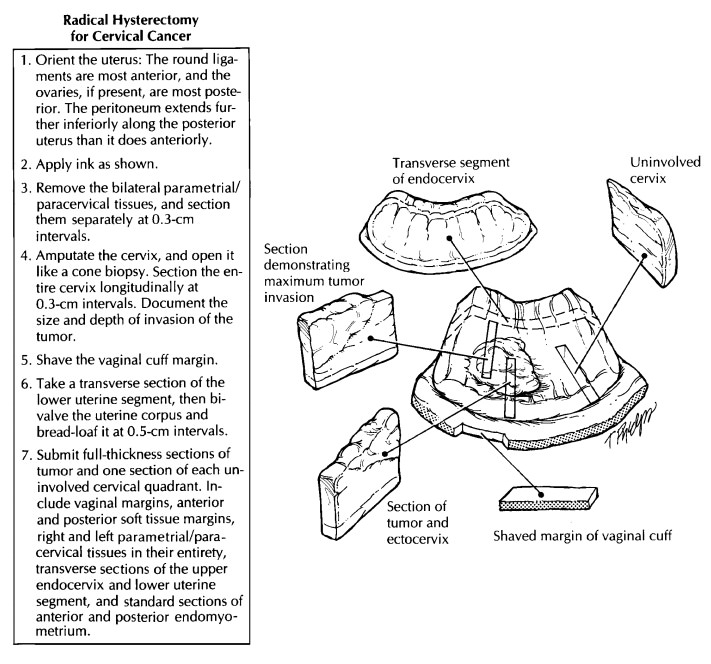 Now turn your attention to the uterine corpus. Take a transverse section of the lower uterine segment and bivalve the uterus into anterior and posterior halves. Examine the corpus with serial transverse sections as you would in any hysterec-tomy specimen.

Sections for microscopic analysis should be chosen to demonstrate the maximum thickness of the tumor and its interface with any normal-appearing mucosa. If the tumor is not visible, the cervix with attached vaginal cuff should be entirely submitted as in a cone biopsy. The su-perior extent of the tumor can be documented by taking transverse sections of the upper endo-cervix and lower uterine segment. The inferior extent of the tumor is documented by taking sections of the cervical tumor that include the adjacent vaginal tissue. Margins to be evaluated include the left and right parametrial/paracervi-cal tissues, submitted in their entirety, and the vaginal cuff. The anterior and posterior cervical soft tissue margins should be submitted to de-lineate the extent of the tumor in relationship to the bladder and rectum.

Lymph nodes are usually submitted separately by the surgeon from the right and left internal iliac, external iliac, obturator, pelvic, and para-aortic node groups. They can be handled in a routine manner for evaluation of metastatic disease.

·  What is the tumor size? Give horizontal spread (in millimeters) for microinvasive tumors and overall size (in centimeters) for gross tu-mors. State which quadrants of the cervix are involved.

·  What is the maximum depth of invasion (in millimeters)? Measure from the base of the squamous or glandular epithelium from which it originates.

·  What is the thickness of the cervical wall at the point of deepest tumor invasion (in milli-meters)?

·  Does the tumor involve capillary–lymphatic spaces?

·  Does the tumor extend into the vagina, para-metrial/paracervical tissue, uterus, or adnexa? Specify the extent of involvement and depth of invasion.

·              Does the tumor involve any resection margins (vaginal, anterior and posterior cervical, and bi-lateral parametrial/paracervical)? If the tumor is close to but does not involve a resection 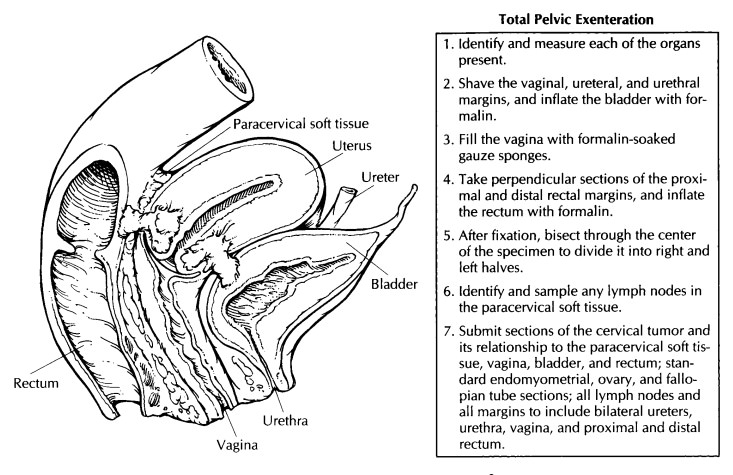 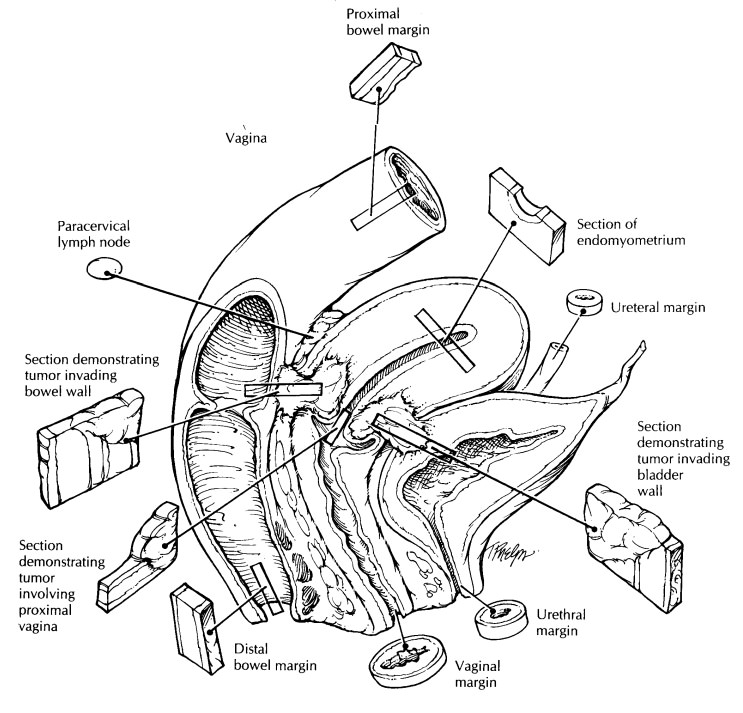